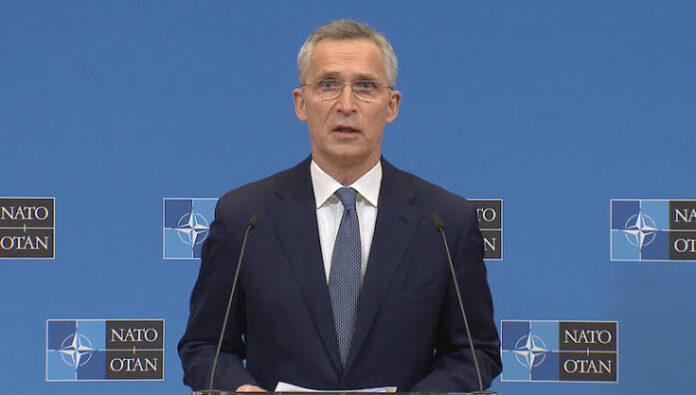 NATO Secretary-General Jens Stoltenberg said Friday that the alliance was deploying thousands of combat-ready land, air, maritime and special operations forces to protect and defend every ally, and every inch of its territory.

Russian assaults on the Ukrainian capital Kyiv have been met with fierce resistance, as the Ukrainian military say they have fought off several attacks. The military said in a Facebook post early on Saturday that an army unit managed to repel Russian forces near its base on a major city street.

Stoltenberg accused Russia of trying to topple the Ukrainian government, but said its allies were very committed to continue to provide support.

“We see rhetoric, the messages, which are strongly indicating that the aim is to remove the democratically elected government in Kyiv.

“We are now deploying the NATO response force for the first time in the context of collective defence. There must be no space for miscalculation or misunderstanding. We will do what it takes to protect and defend every ally, and every inch of NATO territory,” Stoltenberg said.

US President Joe Biden has said American troops would not be sent to Ukraine, but announced that some US troops would be sent to the Baltics to bolster NATO positions in the east.

Meanwhile, many have described as ‘weak’ the sanctions unveiled by the US and its allies in response to Russia’s decision to send troops into eastern Ukraine.

The US has imposed sanctions on Russian government debt, a handful of ‘oligarchs,’ a few banks closely associated with the Kremlin and has banned Americans from doing business in the two rebel-held regions of eastern Ukraine whose ‘independence’ Russia recognised this week.

On its part, the European Union has limited Russian access to its capital markets and financial services, banned EU investors from trading Russian bonds, sanctioned some individuals, ‘blacklisted’ Russian legislators who voted in favour of recognising the breakaway territories, froze their assets and banned them from travelling to EU countries.

“I think that this weakness that the Biden administration and the diplomatic failure is projecting is that our enemies and adversaries around the world know they can walk all over Joe Biden and his weak diplomatic core. We should have imposed sanctions earlier – strict, crippling sanctions,” the U.S. Representative for New York’s 22nd Congressional District Claudia Tenney told Fox News.

Similarly, Nigeria’s former Minister for Foreign Affairs Bolaji Akinyemi said in an interview on Arise TV, monitored by our reporter, that while not sending military troops to Ukraine was a rational decision, the sanctions imposed by Western countries were delayed and at best just a slap on the wrist.

Akinyemi, who criticised European countries for failing to cut Russia off from swift or go after the country’s oil exports, added that Putin was exploiting Biden’s weak leadership.

“The only country to me who has shown that its got a backbone has been Germany. From day one, as soon as Putin recognised (the two separatist groups), the German chancellor grounded that gas pipeline. He gave his all, the maximum that Germany could do and yet it was Germany they had thought would waiver,” the former minister said.