Nigeria has cleared a backlog of its annual contribution to the World Trade Organisation, WTO, from 2019 to 2022.

The new director-general of WTO Ngozi Okonjo-Iweala made this disclosure on Tuesday in Abuja during a meeting with finance minister Zainab Shamsuna Ahmed.

Though the former finance minister did not disclose the amount paid by Nigeria to clear the outstanding fees, contributions to WTO are determined according to each member’s share of international trade (percentage) based on trade in goods, services and intellectual property rights.

There is a minimum contribution of 0.015 percent for members whose share in all members’ total trade is less than 0.015 percent. WTO record shows that  Nigeria’s trade share among member-states has never declined to that level. 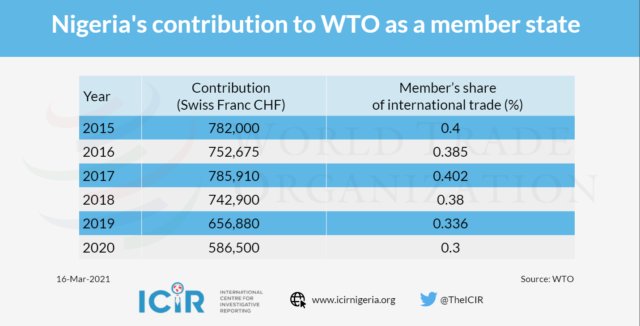 The amount contributed in 2020 and 2015 shows that Nigeria’s share of international trade has dropped by 25 percent in the last five years.

In the third quarter of 2020, Nigeria economy slid into recession with a decline of 3.6 percent, leading to the second recession in five years.

Though the economy exited recession in the fourth quarter of 2020, according to the National Bureau of Statistics, Nigeria’s recovery is expected to be weak and gradual under current policies, the IMF has predicted.

“Real GDP growth in 2021 is expected to turn positive at 1.5 percent. Real GDP is expected to recover to its pre-pandemic level only in 2022”, say  Ari Aisen, Jesmin Rahman and Jiaxiong Yao of the IMF, African Department.

APC primary: We have no plans to provide accommodation for delegates – Osinbajo campaign...