Nigeria Does Not Care Enough For Displaced Persons, Report Reveals 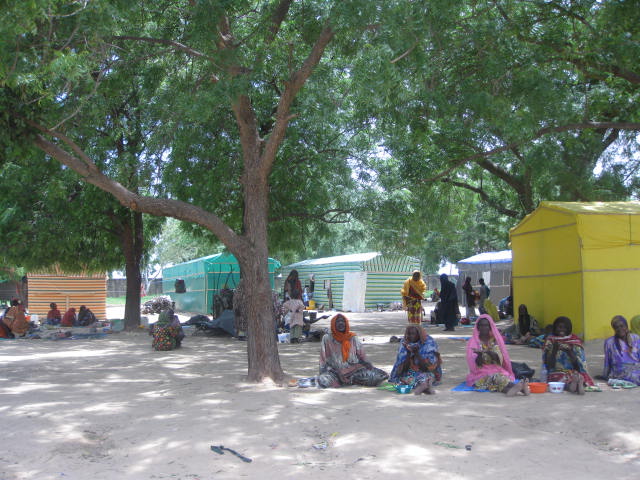 “While the numerous aid agencies and the Nigerian state are struggling with issues of leadership, capacity, and priorities, hundreds of thousands of displaced people in northeast Nigeria are being left to fend for themselves. The magnitude of the crisis and the scale of needs being unaddressed demand a better response, in particular for women and girls” – Francisca Vigaud-Walsh, Refugees International Senior Advocate for Women and Girls.

A report by a US-based humanitarian advocacy group has accused those responsible for caring for internally displaced persons, IDPs, in the North east, especially in Borno State, of neglect.

Refugees International, RI, an organization that uses its reports to challenge policy makers, donor agencies, governments, care givers, and others to do more to make life bearable for displaced persons around the world, says IDPs in Nigeria, particularly women and children, constantly battle with the horrors of survival as they are exposed to serious dangers, including rape and other forms of violence.

Titled Nigeria’s Displaced Women & Girls: Humanitarian Community at Odds, Boko Haram’s Survivors Forsaken, the report, which was released Thursday morning, details the gory realities confronting the IDPs right under the noses of officials, both government and non-governmental. More worrisome is the gender-based violence, including rape, that women and girls are subjected to both inside and outside camps.

This also includes confessions by women that they resort to sex-for-food survival technique.

This is made worse by the needless fight for territory among humanitarian agencies, government’s focus on defeating Boko Haram and the overwhelming burden of the situation.

“The humanitarian crisis facing the aid community in the northeast is nothing short of daunting. According to the 2016 Humanitarian Needs Overview (HNO), 14.8 million people are affected in four states of the northeast. The UN estimates that of this number, seven million are in need, three million of whom are estimated to be entirely inaccessible. It is worthwhile to note, however, that precise numbers are difficult to attain due to the humanitarian access constraints.

“Overall, there are an estimated 2.2 million displaced in the northeast, according to the International Organization for Migration’s most recent displacement tracking exercise. This is a sharp increase from the much more modest figure of 261,000 in December 2014, as per the HNO. The vast majority of the displaced – 1.3 million – are in Maiduguri and its environs,” the report says.

The report observed that, while those in camps are fortunate to get some sort of attention, if any, the majority of those affected live in host communities with very little to no attention from government. They are left at the mercy of their hosts, who themselves struggle to survive, it added

According to RI, most of the IDPs who spoke said their number one concern is food and this has not been easy to come by. The report says in February 2016 only 82,977 displaced persons, 6.3 percent of the total reported IDP population in the state capital, got food in Maiduguri.

“Access to food – both in and out of the camps – was the primary concern cited by IDPs with whom RI spoke. According to figures released in March 2016 by the UN Office for the Coordination Humanitarian Affairs (OCHA), an estimated 2.5 million children are malnourished. Within the government-run camps, the number of displaced far outstrips the number of water, sanitation, and hygiene facilities that international standards call for in camp settings, forcing women and girls to wait for hours in lines, with many ultimately opting for open urination and defecation,” RI notes.

“One INGO working in the host communities in Maiduguri asserts that nearly every household is housing IDPs, in some cases multiple families, and host families are now selling their assets to be able to feed displaced people under their care. Livelihood opportunities are grossly limited for those living both inside and outside of camps. Finally, several displacement sites have been targeted by Boko Haram suicide bombers, leading to restrictive policies involving basic human rights such as freedom of movement, which impact both IDPs’ protection and their ability to participate in income-generating activities.”

Sadly, the report adds, of the $248 million sought for the year by the UN for the humanitarian situation in Nigeria, only $33.7 million, representing 14 percent, has been raised as at April.

“Against this backdrop, at the time of RI’s visit, there were only a handful of UN agencies, with very limited personnel, and less than ten international organizations operating in Maiduguri. At time of writing, the 2016 UN humanitarian appeal for Nigeria is dangerously underfunded,” it said.

Little or no protection for women and girls

Women and children, RI noted, face great risk as they are accorded little protection probably due to the scale of the crisis. As a result, they are exposed to severe violence. Among the women rescued by the military, there are underage girls that had been forcefully married by Boko Haram, used as sex slaves and thought how to make explosive devices. Sadly, when they are brought to government-run camps, no special attention and care is given to them, leaving them to find ways of surviving the trauma on their own.

“There is no process for identifying women and girls that have escaped and fled to Maiduguri without the assistance of the military. And there is no mechanism by which the military and humanitarians can coordinate to identify women and girls so they can benefit from much-needed services,” the report pointed out.

RI met a 14-year-old girl who typified the dangers women and girls have been forced to go through.

“She was abducted during an attack on her village of Baga and taken as a wife by a Boko Haram fighter. After one year in captivity, she and two other girls seized an opportunity to escape. They walked to Maiduguri over the course of a week and made their way to a government-run camp. She explained to the camp guards that she had just escaped captivity, and after being screened with a metal detector, she was allowed in. During her short-lived time in the camp – three days – she did not benefit from any services. Three days later, she was taken to Giwa Military barracks on suspicion that she might be a Boko Haram sympathizer.

“During her time in prison, she received no medical assistance of any kind. She was never tested for pregnancy or sexually-transmitted infections (STIs), despite having been a “Boko Haram wife.” During the course of RI’s mission to Maiduguri, the governor ‘pardoned’ her alongside 274 other detainees. RI met with her four days after her release. She was now living in a government-run camp. Upon questioning, it became clear that no information was made available to her, and neither an authority nor a humanitarian actor had attempted to facilitate access to care of any sort. There was no formal system for referring women and girls in need to get the life-saving treatment they need,” it explains.

Another case also involved a minor, who told an IDP that she was taught how to make explosives and was pained by the thought that she could have been responsible for the death of others. Instead of getting the little help, she was arrested.

Sexual exploitation of women not uncommon

Displaced persons who spoke to RI listed sexual violence as one of the prevalent problems they face, especially inside government-run camps. Some said they had to leave the camps because of this.

“In all interviews and focus group discussions RI held with displaced women, GBV was raised as a feature of displacement. Women in the camps remarked that sexual violence is not uncommon, while community-based organizations remarked that it is “an open secret.” In fact, the risk of sexual violence was cited by four different interviewees as a reason why they feared life in a government-run camp or decided to abandon the camp to live in a host community,” the report noted.

It added that International Medical Corps volunteers once recorded as many as twenty rape cases weekly in seven host communities in Borno State, meaning that even outside the camps, women are not safe from sexual violence.

These discoveries only confirm the findings of an investigation by this website published in a report in January 2015 which detailed cases of rape and child trafficking in IDP camps in Nigeria.

The report, titled Grim Tales of Rape And Child Trafficking In IDP Camps, led to the setting up of an investigation by the federal government but it tuned out to be a halfhearted attempt by the government to cover up its own inadequacies and failings.

The global humanitarian crisis, especially the refugee problem in Europe caused by the conflict in Syria, has also contributed to the less attention. Consequently, suppliers of medicines and other kits needed for survivors of sexual violence are overstretched.

“The pressures on the global humanitarian system are reverberating in northeast Nigeria: the agency mandated with procuring Inter-Agency Reproductive Health kits, the United Nations Population Fund (UNFPA), has been unable to secure a shipment of Kit 5, the medical kit designed to treat STIs. UNFPA’s suppliers in Denmark, China, and the Netherlands informed the country office that they were unable to fulfill the purchase order due to the overwhelming global demand; their supplies are exhausted. Kits are currently under production and should be made available to UNFPA Nigeria at the end of April 2016,” RI reports.

Women and girls now resort to self-help in dealing with their problem, including drug abuse, RI found out.

“When asking a group of women in a focus group what self-care they practice to alleviate their trauma, RI learned that women and girls are reportedly purchasing and drinking bottles of cough syrup to “go to sleep and forget.” Upon further investigation, RI learned that this is not a pre-existing coping mechanism amongst women and girls. In fact, demand for cough syrup in camps has increased such that supplies have become scarcer, driving the price up from 60 Naira per bottle to 150-200 Naira,” it says.

Refugees International proffered some solutions to the problems facing IDPs and these include the need for federal government and the Nigerian Red Cross to work with international organisations in carrying out a missing person registration exercise to help families reunite with loved ones.

“With the support of the Humanitarian Country Team (HCT), the Protection Sector Working Group (PSWG) and Gender-Based Violence (GBV) sub-working group must prioritize the establishment of a formal referral mechanism between Nigerian authorities and humanitarian organizations so that displaced women and girls can access GBV screening and services.

“The Global Camp Coordination and Camp Management Cluster (CCCM) should deploy technical assistance to work with the National and State Emergency Management Agencies (NEMA and SEMA, respectively) on developing camp management standards and procedures that ensure timely and equitable delivery of food and non-food items,” the report suggests.