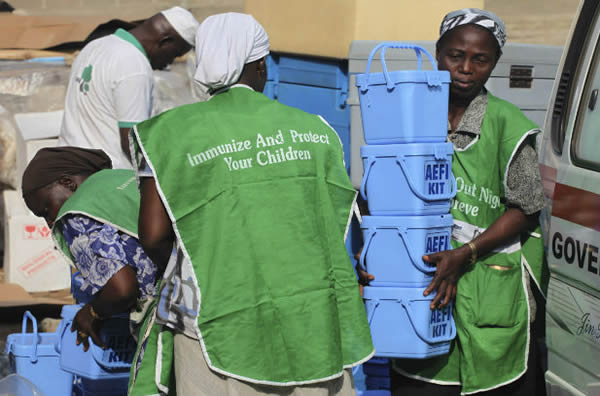 The Nigeria Academy of Science has observed that necessary preventive steps such as effective laboratory diagnosis, strict barrier nursing, public health education and awareness, as well as domestic airport monitoring of travellers, and many more necessary to contain Ebola virus, are yet to be taken in the country.

Responding to the World Health Organisation, WHO, warning on Monday to all West African countries about strengthening their response mechanism to the disease, the Academy’s president, Oyewale Tomori, warns that “If these things are not already on ground by now, we are in trouble, should the disease enter the country today, especially if the strike lingers.”

The renowned professor of Virology dismissed the statement by the minister for information, Labaran Maku, in April that Nigeria has drugs and vaccines in place to deal with the disease.

“It is a flat lie because there are no drugs to treat Ebola, we only treat symptoms and there are no vaccines. Nigeria is not prepared.”

“Ebola virus is very deadly. Every body fluid of an infected person is laden with the virus. That is why a lot of health workers are themselves getting infected. There are no vaccines and there are no drugs to treat it. The drugs available are just to treat the symptoms unlike Lassa fever where you can give drugs,” he explains.

“Also there is no laboratory in Nigeria that can diagnose it. If we have any case in Nigeria now, the samples have to the Center for Disease Control in the U.S which is a shame,” he adds.

Our reporter could not get the project director, Nigerian Center for Disease Control, Abdulsalami Nasidi, to comment as he said that he was in Ghana, attending the WHO meeting which ends on Thursday.

Already, the disease is widespread in Guinea, Sierra Leone and Liberia, which all have border relations with Nigeria and given the itinerant nature of Nigerians who continually have trade and social activities across border, the country is highly at risk.

The World Health Organization reported on Monday that the infection rate in Guinea, Sierra Leone and Liberia stands at 759, including 467 deaths and has thus called the ministers of health in the West African sub-region for a high level meeting in Accra, Ghana.

According to WHO, Ebola disease is an often fatal illness in humans characterized by the sudden onset of fever, intense weakness, muscle pain, headache and sore throat. This is followed by vomiting, diarrhea, rash, impaired kidney and liver function, and in some cases, both internal and external bleeding.

It is introduced to humans through close contact with the blood, secretions, organs or other bodily fluids of infected animals. In Africa, infection has been documented through the handling of infected chimpanzees, gorillas, fruit bats and monkeys.

The incubation period is 21 days, but it is reported that men who have recovered from the disease can still transmit the virus through their semen for up to 7 weeks after recovery from illness.

According to Tomori, given the speed at which the virus is advancing, by now the government should have put measures in place to monitor entries into the country at the domestic airports.

“It is important for officials at the airport to check everyone coming into the country for the virus. Even after they have certified them okay, they should do a follow up call after three weeks, to find out whether there are reported cases of fever. This is because the incubation period of the disease is 21 days, and it is possible that at the time of the first check, the virus was not detected,” he said.

Also, he said, there should be public awareness, jingles on radio and television on preventive measures the public can take and on prompt reporting of cases of unusual fever.

“We are starting from the emergency response, to the planning and then to the mitigation,” he enumerates.

“In emergency response, the health sector has met with all stakeholders where all our doctors have been informed on the disease. All our data collectors in private and public hospitals are well informed, in spite of the current strike; we have back up doctors because we know that this is an emergency. We also have the critical care unit in the hospitals were patients could be isolated,” he said.

He adds that there is currently a sensitization program going on in the local governments where the public is educated.

In reality, in a vox pop of secondary school students in Lagos, only 10 out of 70 students in a class have heard of Ebola virus.

“We are also working with the Ministry of Agriculture, so as to curtail transmission from both live and dead animals and abattoirs,” he stated.

Responding to laboratory diagnosis, Dr. Osayintolu says, if the state runs into challenge in the testing, it has agreements with International reputable laboratories in UK, which can help them with the results.

Ebola first appeared in 1976 in two simultaneous outbreaks in Nzara, Sudan, and Yambuku, Democratic Republic of Congo. The latter was in a village situated near the Ebola River, from which the disease takes its name.

Outcomes of the meeting with the WHO promises to deploy additional experts in the various specialties (epidemiology, social mobilization, case management, data management, and logistics, among others) to support the EVD outbreak response efforts, into West African countries to fight the virus.

We Must Stop Making The Insurgents Feel Good

Kickback for Referral: How doctors, diagnostic centres, defrauded us — Victims

No more strike as Labour, FG reach agreement over…