Nigeria rakes in over USD $25bn dollars in export value, spends close to $10bn on imports within eight years in West- Africa 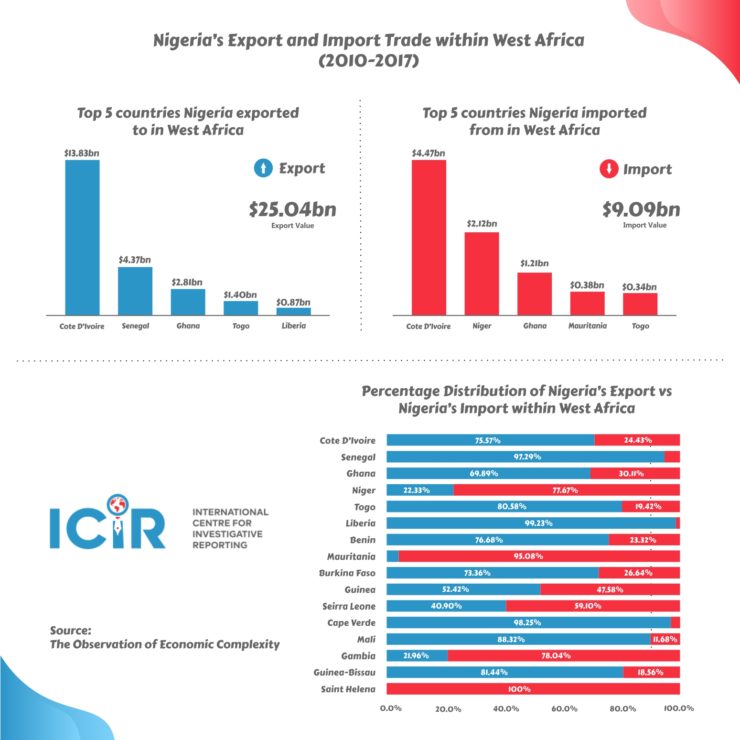 NIGERIA is considered the largest economy in Africa with a Gross Domestic Product change rate of 1.9 per cent in 2018 and projected to hit 2.1 percent by the International Monetary Fund in 2019, thereby making her a huge potential beneficiary of African Continental Free Trade Area (AfCFTA) agreement.

In West-African, from 2010 to 2017, Nigeria raked in over $25 billion from her export activities with other West –African nations. Cote D’Ivorie comes top amongst nations to which Nigeria sell, contributing a total sum of almost $14billion dollars, followed closely by Senegal at over $4billion dollars, Ghana at $2.8billion, Togo $1.4bn and Liberia, $870million.

The countries make the top five West-African states from which Nigeria benefit more doing business with.

However, with Nigeria as a signatory to AfCFTA,  the country’s level of importation is expected to rise even as her exports gain momentum as lesser tariff plans would make the movement of goods amongst the borders easier and predictably would lead to more imports into Nigeria for her teeming population.

‘‘As African leaders, our attention should now focus on implementing the AfCFTA in a way that develops our economies and creates jobs for our young, dynamic and hardworking population

‘‘Our consultations and assessments reaffirmed that the AfCFTA can be a platform for African manufacturers of goods and providers of service to construct regional value chains for made in Africa goods and services,” the Nigerian president had said after signing the trade treaty in Niamey, Niger on 7, July 2019.

With the import ratio rate recorded with the British overseas territory, Nigeria has however never reported exports to the territory.