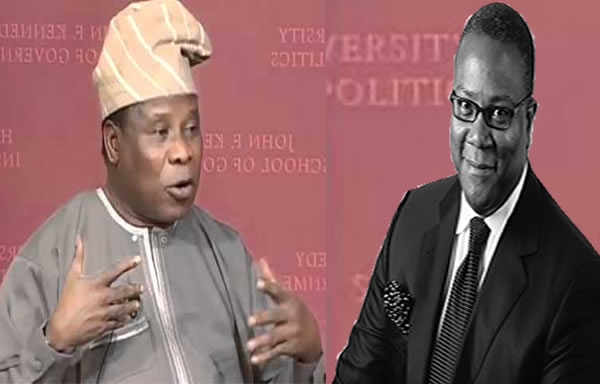 Just a few months after disclosures about a $1.5 million dollar image laundering contract awarded by the News Agency of Nigeria, NAN, to an American PR firm, stirred controversy, the International Centre for investigative reporting, ICIR, has discovered that the Nigerian Embassy in Washington DC has also awarded two similar frivolous contracts worth over N100 million ($700, 000) in less than a year to another US based company to do ostensibly what its staff are paid to do.

According to documents obtained by icirnigeria.org, between July 2013 and May 2014, the embassy awarded two contracts to Mercury Public Affairs LLC worth $300, 000 (over $50 million) and $400, 000 (over $60 million) respectively for jobs that have been described as basic diplomatic functions that could easily be handled by the embassy staff.

The first of the contracts showed that in four months, between July 22 and November 22, 2013, the Nigerian Embassy paid $300, 000 for Mercury to: “Provide government affairs counsel and arrange meetings with key Executive and Legislative branch officials and staff on issues of importance to Nigeria; arrange meetings between US and Nigerian officials to further deepen business, economic and security ties, and; facilitate and arrange US visits for key Nigerian officials.”

The contract document, which is in possession of this website, was signed on july 22 on behalf of the Nigerian Embassy by Ade Adefuye, the Nigerian Ambassador to the US and Morris Reid, managing director of the PR firm.

Our investigation further revealed that in addition to the $300, 000 contract fee, there was room for additional money to be charged without limit, as the contract provides for “Miscellaneous expenses, such as travel” to be “billed in addition to the retainer.”

The second contract, which lasted for five months, from December 2013 to May 2014, cost $400, 000 and saw Mercury engaged for “strategy development; liaised with US officials and relevant organizations to enhance the US/Nigerian relationship,” responsibilities that were again not beyond the capacity of the embassy staff.

While ICIR could not ascertain how much was billed by Mercury to the Embassy as miscellaneous expenses in the first contract, our investigation revealed that the PR firm amassed and billed the Nigeria Embassy an additional expenditure of more than N10 million ($67, 383), in the second contract.

This expenditure, it was discovered, was accumulated mainly from numerous travels that came with feeding and accommodation, including participation by agents of the PR firm at the World Economic Forum on Africa held in Abuja earlier in the year.

Also, significantly, both contracts could have been awarded as one as they cover a period of about twelve months but were split, probably, to meet the approval limit of the Ambassador.

In the filings by Mercury to the US Justice Department, a requirement under the Foreign Agents Registration Act, FARA, the company details the activities it conducted for the embassy to be mainly organising meetings and sending emails. Such meetings were principally between US government officials, including legislators, and Nigerian officials, principally Adefuye and the minister of Finance, Ngozi Okonko – Iweala.

Speaking to this website on the contract, Seember Nyager, chief executive officer of Public and Private Development Centre, PPDC, which wrote a joint Freedom of Information Act, FOIA, request with the ICIR to the Embassy for details of the contract, including the bidding process, said that not only was the sum excessive, the contract itself was needless.

“It just looks extremely vague to me because, honestly, that is exactly what the contract says, and of course, there is no liability. So, anything they do will be meeting the term. And I don’t see why the embassy cannot just write directly to the government officials they would like to meet in the US because that is what diplomatic bodies do.”

“I do not know that diplomatic bodies need to hire PR firms or similar firms to arrange these kinds of meetings by virtue of the fact that those are the core functions of diplomatic outfits, not something that ought to be outsourced and certainly not for $300, 000.”

Nyager said Embassy staff should have no problem executing the job which Mercury was hired to do.

“It is a key function of diplomacy, I think, to be able to arrange those kinds of meetings and I doubt that if you write a letter saying you would like to arrange a meeting with this and this person, you would be turned down abruptly. It is very unlikely that they would not respond to you. Even ordinary citizens, when they write letters they get responses. So I see no reason why a diplomatic outfit would get no response (since) they already have ties with the foreign governments that host them.”

The open-ended nature of the miscellaneous expenses further makes the contract a sheer waste of public funds, according to Nyager. “It is not supposed to be and that is what makes the contract extremely vague because anything you do can be seen to be acceptable.”

“I believe public institutions, of which an embassy is a part of, have budgets and they can only work with their budget. So if you are entering into a contract, you can’t enter into a vague contract that does not state a limit at all for utilisation of resources. Miscellaneous is too wide and too vague (and) I think it contravenes every form of due process and every form of public resource management in Nigeria.”

Seember Nyager said Nigerians are partly responsible for such misuse of public funds by government agencies because, “By being passive, we encourage it and contribute to the system of unaccountability.” According to her, however, a stop can be put if Nigerians take advantage of the Freedom of Information Law.

“There is ample provision now for all of us to demand that we know how our public resources are being spent and when we see that somebody has done it (uncovered misappropriation) I think people should be angry enough to agitate against any of such kinds of practice because it is wrong.

“We need to see that punitive measures are taken so that people are discouraged from doing these kinds of things and know it is an open system and we cannot be exploited or taken advantage of,” she concluded.

The award of PR contracts to US firms has become a trend by Nigerian government ministries and agencies in the last few years. The first outcry against such a contract was a $1 million PR contract awarded by Ojo maduekwe, then minister of Foreign Affairs to Patton Boggs, on of america’s most priced public relations companied. That contract was awarded in january 2010.

Recently, there was also outrage over a contract awarded by the News Agency of Nigeria, the nation’s official wire service, in June this year to Levick Strategic Communications, a Washington – based public relations for an amount in excess of $1.5 million.

According to the contract document, part of Levick’s brief was to provide “government affairs and communication counsel” to shape international and local media perception about the Nigeria government’s efforts to rescue the more than 200 girls from Chibok, Borno State, kidnapped by Boko Haram insurgents in April.

When civil society groups asked NAN for details of the contract, the agency dodged, referring them to the office of the National Security Adviser, NSA, which it claimed had the information.

All attempts to get the Embassy to respond to several queries on the contract such as whether due process was followed, what specific services Mercury has delivered and costs proved abortive as neither the Ambassador nor other embassy staff responded to our email sent over two weeks ago.

Also, the FOIA request jointly written by PPDC and ICIR, which was hand delivered to the embassy’s offices in Washington DC has not elicited any response.

Similarly, Mercury did not respond to our email as at the time of filing this report.  When our reporter phoned the PR firm’s Washington DC offices, he was told by the lady who answered the call that questions relating to contracts could not be handled on the phone. She, however, availed our reporter the personal email of the managing director. However, another email requesting information sent to Reid’s email address last week has also not been replied until the time of going to press.

Report blames rising piracy in Gulf of Guinea on weak…