ON September 7, 2021, the Presidency Office of Digital Engagement (PODE) published what it called ‘a compendium of President Buhari’s ongoing and completed infrastructure projects in South-East Nigeria.’

The list was released two days before Buhari’s visit to Imo State, one of the five states of South-East Nigeria.

It was a strategy targeted at convincing the people of the region that the current government of Buhari, which they had accused severally of marginalising them, was committing humongous public resources to building and rehabilitating their decrepit infrastructures.

On-the-ground checks, however, showed that PODE lied on the status of some of the projects and told half-truths on a few others.

It rehashed some of the lies and half-truths told by Minister of Information Lai Mohammed in 2018 that were debunked here and here, making reference to “more than 60 ongoing federal road and bridge projects across the five states of the region…” already fact-checked by the reporter.

The source of the projects listed by PODE was traced to this link. The list came from the Ministry of Information and Culture but was placed on the website of the Federal Ministry of Works and Housing.

Difference between Mohammed’s and PODE’s claims

Mohammed’s claims in 2018 did not include water projects. PODE added some water and dam projects it claimed were completed in the South-East region by the current government. It also listed some power and MSME projects, which were not part of Mohammed’s claims three years ago.

Commencement of the investigation

The reporter picked 27 projects at random – out of over 70 projects listed by PODE – for investigation. Many of the projects investigated were previously listed by Mohammed and rehashed by PODE as either ongoing or completed.

The reporter visited all the water projects, except one. The 27 projects investigated cut across the five states of the South-East region, which are Imo, Enugu, Ebonyi, Abia and Anambra states. The investigation was done in December 2021 – three months after the claims were made.

The first project visited by the reporter was Inyishi Regional Water Supply Project, situated in Imo State. PODE claimed that this project had been completed, but there was no sign that any work had ever been done on it when the reporter visited. It was still, stagnant water, making it unsafe for drinking or household use.

Normally, a scheme like Inyishi Regional Water Supply Project should provide a source of water for the community, but villagers said it was only good for washing cars and motorcycles. There was no signpost signalling commencement or completion of the project, nor was there any piece of equipment found there.

The water is surrounded by thick green grass, creating the foreboding that it could be a habitation for scorpions and cobras.

A woman who lived close to the water project, Anna, told The ICIR that she only saw some government officials five to six years ago while inspecting it.

Another villager, Joy Okereke, said it was only useful for cyclists who always came to wash their motorcycles.

The motorcyclist who brought the reporter to the site, Nnaemeka, said because the project was non-existent, villagers relied mostly on water from wells.

The water scheme,  which is located nearly 20 kilometres from Umuahia, Abia State capital, was handled by Jidadu Ventures Limited, as seen on the signpost mounted in front of the project site.

The ICIR journalist was not allowed into the project’s premises by a security guard when he identified himself. Outside of the gate, it would seem that the project had been completed: The water storage tank had been erected and the finishing touches had been made.

President-General of Ofeme community Chibueze Onyemata, a lawyer, told The ICIR that the project had been completed and was functional, benefitting the three villages in the town. He explained that it had three sources of power: solar, hydro (public electricity) and generator. He praised President Buhari and Governor Hope Uzodimma of Imo State for putting the project in place.

“We do not get water from the taps. Only those at Umu-Nkpu enjoy it,” a villager at Udo Ofeme, Sunday, who lived fewer than five kilometres from the water project, told this reporter.

An engineer Peter Oyigbo told The ICIR that a project could only be described as completed when it began to serve the purpose for which it was constructed.

“So, if a water project has dry taps or does not provide water, it is simply not a completed project,” Oyigbo, a Lagos-based structural engineer, said.

Next is the Earth Dam situated at Amauzari in Imo State. PODE clamed that the project was completed, but villagers said they did not witness when it was even started.

When the reporter got to the actual location of the project at a village known as Okwosu, there was no evidence to show that work had been done there. There was neither the contractor’s signpost nor was there equipment nearby.

The water was not overflowing its bank, but that was because of the heaps of sand and withered grass that were able to withhold it.

An adjoining road to the water project was untarred, and it rarely had visitors, villagers said. The reporter interviewed four villagers, including the motorcyclist who brought him to the site, but none of them admitted seeing any work done on the project in the last three years. “Nobody came here to do that water scheme,” an Amauzari villager, Tochukwu, said when asked about the project.

Johnson Ude, the motorcycle rider who brought the reporter to the site, who is also from the village, said he had never seen contractors on the site.

The last but not least is Uburu water supply scheme, which was handled by a contractor known as Yubar Consultants Limited, as seen on the signpost erected one kilometre from the project. PODE claimed that this project, located in Ebonyi State, had been completed. On-the-ground investigation showed that PODE was correct to an extent.  In terms of structure, the project had been constructed and completed.

“The taps run twice every week,” said a villager, Uduma Nwankwo. However, interactions with other villagers showed that it was not supplying water to those living far away from the project.

The reporter did not witness water flowing from the taps on the day of his visit and one Amaka Oluchi said the project, being an Uburu village water scheme, was not serving the majority of the town. Hence this project can be classified as partially done, going by Engineer Oyigbo’s explanation of a completed project.

The ICIR sent a Freedom of Information (FOI) letter to the Minister of Water Resources Suleiman Hussein Adamu on January 25, 2022,  requesting details of these projects, including how much was allocated to them, names of contractors, contract periods, the status of the projects and amount released so far.

The Freedom of Information Act (FOIA) mandates public and private sectors to make information of public interest available on request.

A Ministry of Water Resources’ staff member contacted The ICIR via telephone on January 31, stating that the information was available.

In line with the FOI Act, the minister was given seven days to provide official responses to the questions, but he failed to do so. 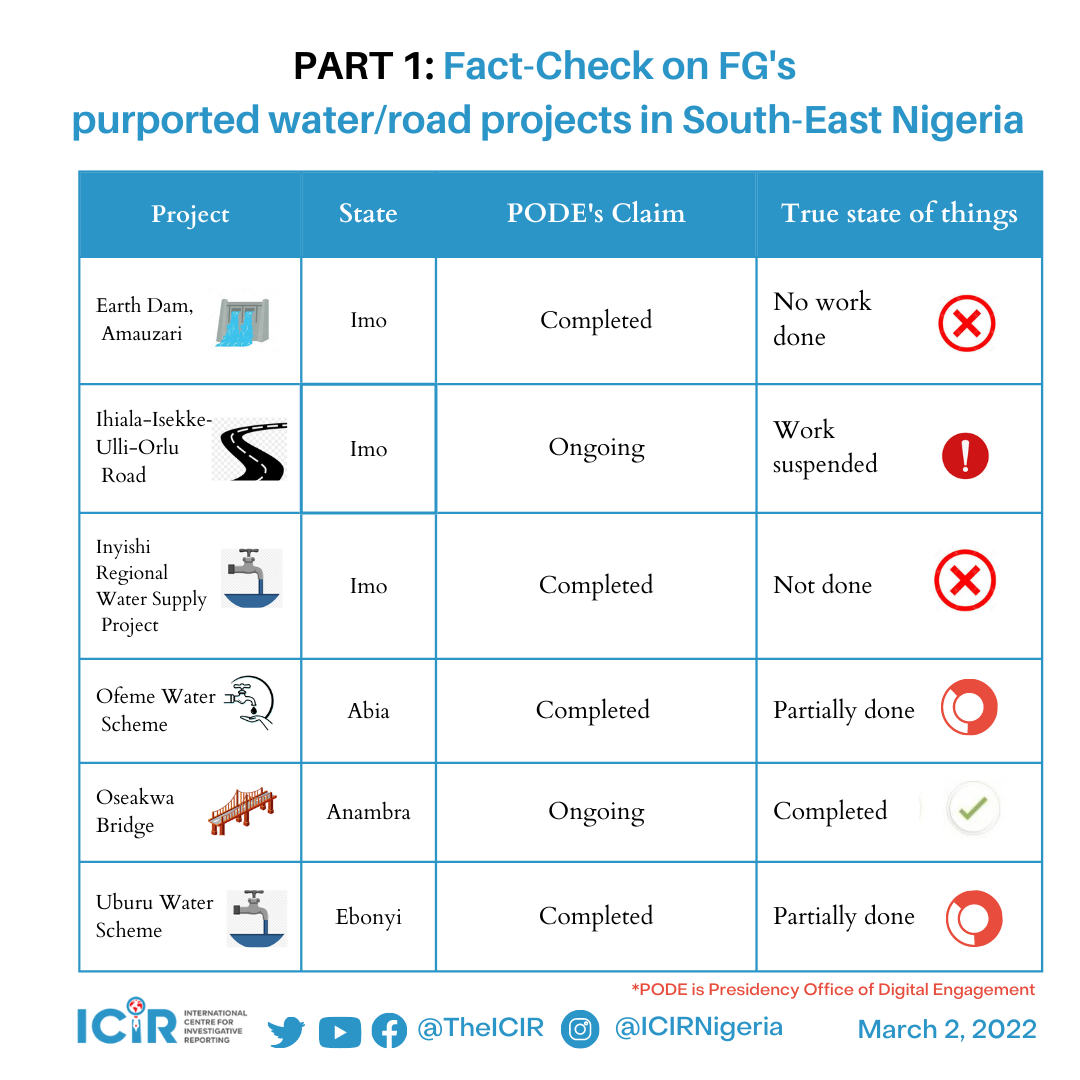 Bridge and an important road in Anambra State

PODE claimed that Oseakwa Bridge located in Ihiala, Anambra State, one of the five states of the South-East region, had been completed. Findings showed that the presidential office was correct. According to information obtained from the 2018 contract details released by Mohammed, the contract for this project was handled by Horizon Construction Co. Ltd.

The bridge wore a new look when the reporter visited in December 2021.

This was totally different from how it was in 2018 when the reporter investigated Muhammed’s claims. In 2018, there was neither a bridge nor a road that could be regarded as Oseakwa, but that has changed.

PODE simply listed the project as ‘construction,’ which is ambiguous.

The reporter found that the project started at a town known as Ihiala and ended at Isekke, both in Ihiala Local Government Area of Anambra State. The project did not stretch to Awo-Idemili, a town bordering Anambra and Imo states.

The route leading from the palace of the traditional ruler of Awo-Idemili, L.I. Okoligwe, to Orlu in Imo State, both in the South-East region, was untarred.

Pinnatech Nigeria Limited, the contractor handling the project as seen on the signpost mounted in front of the site, had tarred the road from Ihiala to Isekke, but was yet to start work from Awo-Idemili to Orlu.

Quantity surveyor for the project Anthony Okafor blamed it on poor weather conditions. Foreman Samuel Kalu told the reporter that work would start ‘soon’ since the rains had subsided.

A native of Isekke Ifeoma Joshua said the contract from Ihiala to Isekke was ‘solid,’ but wondered why the project had stalled.

“This road is closer to Orlu, but because of its state at the moment, vehicle drivers take longer and more expensive routes,” she said. Construction was not going on as in December when the reporter visited the site,  though the contractor was seen, sparking fears that the contractor might be owed by the Ministry of Works and Housing. A resident of Awo-Idemili, Charles, told the reporter that work stopped on the site in 2020.

Residents of Ihiala, Awo-Idemili and Isekke told The ICIR that the road had become an escape route for criminals, kidnappers and armed robbers. The reporter witnessed first-hand, three young men on bikes wielding AK-47 rifles along that axis.

“Every day here, soldiers engage them in gun battles. We are tired, and that is because of the fact that this road here is not yet fully constructed,” a resident, who pleaded anonymity for fear of being attacked, said.

Like the Minister of Water Resources, the Minister of Works and Housing Babatunde Fashola did not respond to an FOI request made by The ICIR on January 25, 2022. He, therefore, did not provide details of the contract, which residents say is slow.