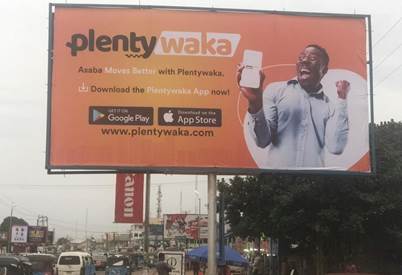 YOU’VE hailed an Uber, waved down a taxi – now a Nigerian start-up will take you to the next level. Their company – Plentywaka – will let you call a bus.

Founder Onyeka Akumah and his team are planning to make their international debut in the Canadian market after recently receiving $120,000 backing from Techstars Toronto. Their firm, which started in 2019, provides transport options via app using its own buses and in partnership with other bus firms, and says it has transported more than 300,000 commuters since its launch. It is one of four Nigerian startups chosen for the accelerator programme, as reported by Grace Akinosun of Quartz Africa.

“Public transportation is complex, and stakeholders’ engagement is critical for expansion. Canada came in well for us with its government support, and this makes the environment conducive,” Akumah says. “We’ve been in talks with some African countries over expansion too. So far, this market has been extremely promising. We intend to hit the ground running once we finalise our seed round this quarter.”

“Nine million people shouldn’t have to hustle for buses and we are going to change that. Our app allows commuters to book the cheapest city-city bus tickets and enjoy in-city rides,” the innovators say on their website.

Managing director of Techstars Toronto Sunil Sharma says his firm is backing the Nigerian mobility startup because it’s solving a massive problem in Nigeria that can be likened to urban transportation challenges in other populated cities worldwide.

The startup, which launched in Lagos in September 2019, uses Android and iOS apps that allow riders to book seats and schedule their journeys from one part of the state to another. Riders can pay for their trips using an in-app ‘Wakapurse’ e-wallet.

PlentyWaka’s mission is to “change the transportation landscape” by decongesting the road and “providing a safe and convenient transport system for bus drivers.” The current transport system is not only uncomfortable for commuters, it is also riddled with challenges that limit the earnings of drivers.

“Our new solution will be targeted at disrupting and massively improving the transportation system and solving some of its age-old problems.

“This new solution will create a profound impact in the transportation sector. It will create employment opportunities for bus drivers, vehicle assistants, engage vehicle maintenance personnel, and also create a better and safer transportation system for daily commuters in Lagos state,” Akumah says.

Lately, African companies have been branching out across the world with their innovations. Last year, Trella, an Egyptian truck marketplace, picked Saudi Arabia and Pakistan over an African market for its expansion (as did Egyptian bus-hailing service Swvl). Nigeria’s credit startup, Migo, branched out to Brazil, while Nigerian mobile money service Paga picked Mexico and the Philippines. Naspers’ African investment vehicle, Naspers Foundry, has elected to focus on South African-based startups that have the potential to scale globally, in any market.

“If the smallest country in the world offers me that, then I’ll go for that market,” Akumah says. “I don’t see expanding to Canada or Ghana or South Africa as one better than the other.”