Domestic airlines call off May 9 strike

THE volume of crude oil lost to thefts and sabotaged in the country between 2016 and 2020 can provide emergency medical helicopters for Nigerians, reduce the nation’s external debts, or at most help construct 107 thousand Type 3 Primary Health Care (PHCs) in Nigeria, findings by The ICIR have shown.

This implied that each 774 Local Government Areas (LGAs) would get at least 138 Type 3 PHCs.

Data from the latest Nigeria Extractive Industries Transparency Initiative (NEITI) Oil and Gas Industry Report released on March 7, revealed a total of 272.2 million barrels (mmbbls) of crude were lost to oil theft and other forms of criminalities in Nigeria’s midstream sector.

The volume of crude oil loss would amount to $14.65 billion considering the cost of oil per barrel at the years under review.

The midstream comprised oil firms involved in the transportation of crude oil or finished petroleum products. These encompass the oil tanker, barge, rail, oil pipeline, storage to mention but a few.

A breakdown of the crude oil losses across the years under review showed in 2016, about 101.05 million barrels of crude oil were lost to theft and sabotages.

By 2020, the volume of crude oil losses in the country had further dropped to 39.16 million barrels.

The issue of crude oil theft and sabotage has become endemic, despite several initiatives and recommendations made by oil and gas experts to curb the trend.

Worst still, the implications surpassed losses to government revenue extending to environmental degradation, health challenge, deaths due to fire disasters including the proliferation of arms as the case may be.

Nonetheless, these losses defer from situations where oil companies were unable to produce at a particular period due to time spent repairing vandalised pipelines or leaks, often described as deferment.

Financial worth of crude oil losses per year

The losses were recorded from 22 oil companies, some of which were oil multinationals and local firms which included SEPLAT, SPDC, EROTON, AITEO etc.

“Usually, crude losses are suffered by companies who transport their products through pipelines where it is susceptible to sabotage.

“For the companies that suffer crude losses, it means their total fiscalised crude oil production for the year could have been higher by the volume of crude loss. 22 companies reported crude losses from theft and sabotage amounting to 39.16 mmbbls and this translates to US$ 1.63Billion,” it revealed in part.

In 2019, 42.25 million barrels of oil were lost to oil theft. This amounted to $2.77 billion, and it is much lower than incidents of crude oil losses through pipelines compromise in 2018. Yet, NEITI recommended an upgrade of technologies deployed in the surveillance of pipeline networks.

Meanwhile, 36.46 million barrels of crude oil losses were recorded in 2017. The 2017 oil theft loss was the least in the five-year trend. The losses were valued at $1.99 billion at an average crude oil price pegged at $54.74 per barrel.

According to the 2017 NEITI Oil and Gas report, “These losses are valued at $869.02 million and $3.55 billion respectively.” The summation of both figures would result in $4.42 billion.

As of the period, the NNPC was advised to deploy technology through aerial satellite surveillance systems to reduce the reoccurring trend of crude oil theft, mainly through pipeline vandalism. Nonetheless, the total sum lost to crude oil theft and sabotages across the years amounted to $14.65 billion.

What crude oil losses, theft could have fixed in infrastructure deficit

It is public knowledge Nigeria is in dire need of basic infrastructure.

From being the worst globally in open defecation to disturbing figures of out-of-school children and unstable data on infant and maternal mortality, it is evident the country’s infrastructural deficit requires urgent overhaul.

But what difference would the huge loss ($14.65 billion) make in fixing some basic amenities such as health care facilities, schools, and the like?

The ICIR attempted to evaluate a typical project cost of erecting a primary health care, the cost of constructing a borehole facility, and also a primary school.

The PHCs, for instance, come in types, according to the National Primary Health Care Development Agency (NPHCDA). It often ranges from Type 1 (One) to 3 (three).

But, using data obtained from the Public-Private Development Centre (PPDC), a Non-Governmental Organisation (NGO), this reporter adopted an already sourced contract details collected through Freedom of Information (FOI) request to Ministries, Departments and Agencies (MDAs) of the Federal Government.

In 2014, for instance, based on findings through the PPDC’s Budeshi portal, the NPHCDA awarded N21.99 million for the construction of Type 1 PHC in Tsanyana Local Government Area of Kano State.

A similar sum was pegged for the same type of PHC in another location, Tundun Wada LGA, in the same state.

In Layanra, Ogun State, where Type 3 PHC was constructed in 2014, the health centre was awarded at the sum of N56.70 million.

Meanwhile, Type 3 PHC comprises – a detached building with 13 rooms, two units of staff accommodation built within the facility, fenced with a gate and a generator and generator house.

It is expected to run 24 hours with Ambulance service, internet among other basic facilities including a motorised borehole. Some health officials would say it could pass as a mini-hospital.

But Type 1 PHC has lower features. According to the public document titled, Linking Data to Primary Health Care Centres in Six States, the type two PHC comprises two rooms with cross ventilation, grid power, generator, motorised borehole, no ambulance but bicycles and motorcycles while the hours of operation is to run from 9 a.m. to 4 p.m.

Hence, if converting $14.65 billion at an official exchange rate of N415 to a dollar would mean N6.08 trillion, it implied that the huge loss could have provided 107,248 Type 3 PHCs across the country. That will be 138 health centres for each of the 774 LGAs in Nigeria.

On the other way, if the sum (N6.08 trillion) should be spent just to construct and furnish a storey building block of 12 classrooms with offices, as found in 2020 procurement at the Government Secondary School, Gashua, Gashua LGA of Yobe state, it would result to 30 blocks of similar project.

According to the open portal, the Universal Basic Education Commission (UBEC) school project was awarded in 2020 at the sum of N201 million.

This implied that five similar school projects could be replicated across the six geopolitical zones, respectively, in the country.

If it was for loan repayment, the estimated sum lost to crude oil in five years would conveniently settle external debts owed by States and the Federal Capital Territory (FCT). It was estimated at $4.77 billion as of the last quarter of 2021.

It would also fix part of FG’s foreign debt portfolio pegged at $33.62 billion.

A Bell 206 Jet Ranger costs about $1.2 million in the United States, according to aerocorner. Should the losses incurred due to oil theft be committed to procuring air ambulances or helicopters for health emergencies, it ($14.65 billion) could procure 12, 208 helicopters at $1.2 million.

Lastly, the increasing rate of cancer casualties in the country is worthy to note. A 10-year research joint study on cancer patients at the Lagos State University Teaching Hospital revealed Nigeria loses about 72, 000 of its citizens to cancer annually.

Regardless, 102, 000 new cases, according to the study, are diagnosed from the nation’s increasing population of over 200 million people.

Still, despite the high cost of treatment, reports say, the country has only three functional public radiotherapy centres in the country. This implied a shortage of cancer treatment or management centres nationwide.

Hence, by procuring a Linear Accelerator (LINAC), a cancer-detecting machine, at an average cost of $500, 000, the country’s loss to crude oil theft and sabotage ($14.65 billion), could stock the nation’s public hospitals with 29, 300, thereby saving more lives.

Though the prices vary, the above price was captured from ROS Radiology and Oncology Systems, a firm that focuses on refurbished radiation therapy and diagnostic imaging equipment.

Solutions to ending the barrage of oil theft

The deployment of an intelligent pipeline monitoring system has been suggested as a viable option to curb the trend.

The need to more effectively implement the policy on modular refineries was also raised as another alternative, vital to encourage local refining, reduce theft. 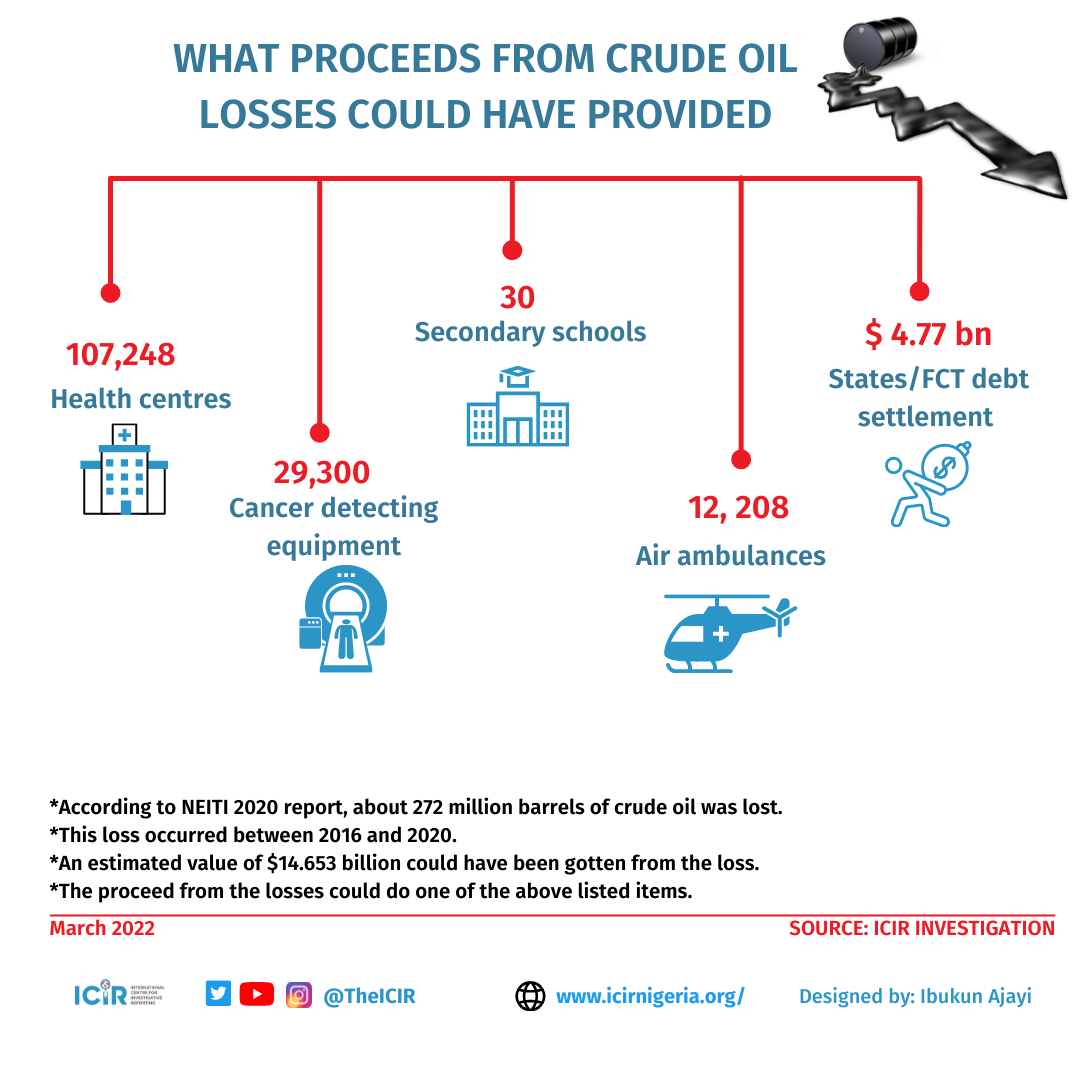 Also, a professor of Energy Economics, at the University of Ibadan, Adeola Adenikinju told The ICIR that the government needs to declare a state of emergency in oil theft and pipeline vandalism in the country.

According to him, the current situation is affecting Nigeria’s production output, investments in the sector, and exchange rate accruals.

“What we are experiencing is affecting investments in the sector, at a time we needed to grow our economy out of its precarious state.”

In March, the Nigerian Upstream Petroleum Resources Commission (NUPRC) unfolded plans to partner with major agencies of government to fight the trend of crude oil theft in the country.

It has always been the mandate of the Nigerian Security and Civil Defence Corps (NSCDC) to protect public facilities, including oil infrastructure, but not much of a feat has been recorded in this regard.

“Crude oil theft is a sophisticated process. From the well-egg head to the ship that brings them into the country is a whole lot of process. So, it is even beyond illegal refining happening in the country.

“It is about addressing the problem from the root. The agencies concerned with the security outfits should focus on proper tracking on the movement of our petroleum product from well-egg head to the Ship and when it berths at the Port in Lagos,” Faith Nwadishi, former board member of NEITI, told The ICIR.

Dauda Garuba, an Independent Researcher, and Energy Expert, also told The ICIR government would need to invest in securing oil facilities in host communities. This, he noted, was already captured in the PIA 2021 through the Host Community Fund.

“The PIA 2021 is already positioned in that direction, although much needs to be done to ensure effective monitoring and implementation.

“Between the crumbs offered by pipeline vandals and oil thieves to a select few in the communities and a well-rooted Fund that will serve the interest of all members in communities, I expect the latter to be preferred. We should advocate the speedy implementation of the PIA2021.”

WOMEN Affairs Minister Pauline Tallen has withdrawn from the 2023 senatorial race. The minister made...

THE Minister of Transportation, Rotimi Amaechi, has stated that he would follow President Muhammadu...
Advertisement