A photo, supposedly of the door-to-door campaign leader of the All Progressives Congress (APC), surfaced on Facebook saying he was brutalised while campaigning for the re-election of President Muhammadu Buhari.

It didn’t say where in Nigeria the assault happened.

CrosscheckNigeria, a collaboration of newsrooms in Nigeria which includes The ICIR  has confirmed the claim to be false and pretentious and that the man in the photo may not even be Nigerian. 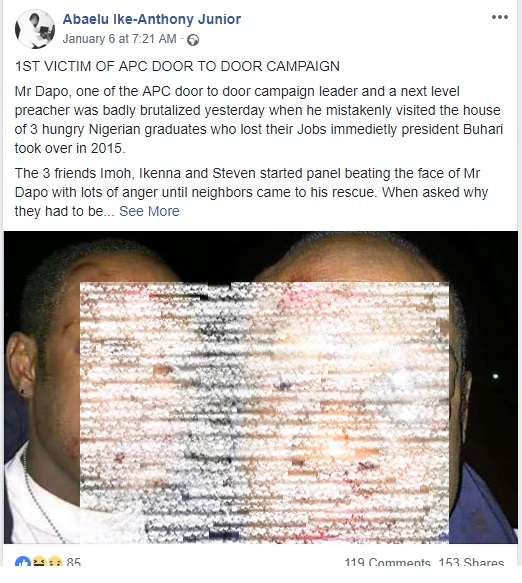 The picture posted by one Facebook user, Abaelu Ike-Anthony on January 7, has garnered about 153 shares and 119 comments. Abaelu claimed to have received it on Whatsapp.

In the post, he wrote: “1ST VICTIM OF APC DOOR TO DOOR CAMPAIGN.

“Mr Dapo, one of the APC door to door campaign leader and a next level preacher was badly brutalized yesterday when he mistakenly visited the house of 3 hungry Nigerian graduates who lost their Jobs immedietly president Buhari took over in 2015.

“The 3 friends Imoh, Ikenna and Steven started panel beating the face of Mr Dapo with lots of anger until neighbors came to his rescue. When asked why they had to beat Dapo that way, one of the unemployed graduate Mr Imoh said ” a hungry Man is an angry Man.

“The injury on Mr Dapo’s face has disorganized his face totally and it’s even hard for his wife and family to recognize him.”

Using the reverse image search tool TinEye, we found that the earliest version of one of the photos surfaced online on January 29, 2018 when a website called Timeofgist reported how a Facebook user posted how a man was beaten for sleeping with another man’s wife in Lagos.

A day after, January 30, 2018, the photo surfaced online again on a Ugandan blog to depict another version of the same story, but this time naming the subject, Ntinda – the name of a suburb in Kampala, the capital city of Uganda.

Chat us on WhatsApp
Advertisement
Previous articleMinimum wage: We are done with negotiations, says Labour
Next articleWe didn’t endorse Atiku, but we’ll identify with a candidate that supports restructuring… Ohaneze