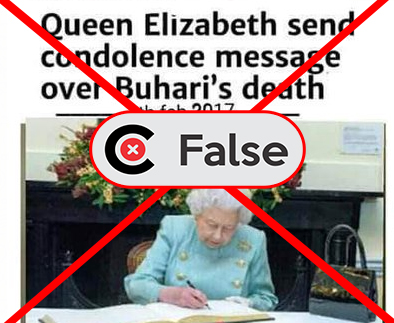 The Queen of the United Kingdom, Her Royal Majesty, Elizabeth II wrote a condolence letter to the Nigerian government over the death of President Muhamadu Buhari.

The claim that the Queen wrote a condolence letter is FALSE

THREE pictures- claiming evidence of Muhammadu Buhari’s death and that the Queen of Britain, Her Royal Majesty, Queen Elizabeth II, wrote a condolence letter to the Nigerian government over the demise of the president have recently been making rounds on social media and Whatsapp.

An attached post to the pictures claimed that the royal majesty wrote the letter on February 7th, 2017, furthering that former Prime Minister of the United Kingdom, Theresa May, also paid a condolence visit to the Nigerian Ambassador to the UK to register her grief towards the death of the president.

The text inscribed in one of the pictures reads thus: “The Queen of Britain, Her Royal Majesty Queen Elizabeth II has sent a message of condolence to the family of Nigeria’s President Muhammadu Buhari and the people of Nigeria.”

There are no official reports on the speculated death of the President and the message of condolence from two sources close to the presidency and to Nigeria have said  President Buhari has passed on and that the photos circulating online are those from his previous visit.

Another London source says Prime Minister Theresa May has visited the Nigerian Ambassador to the UK.

In a message of condolence, the Queen  has said the following about Buhari:

“The death of President Buhari came to us as a shock. He has been one of the active pillars in Africa. May the good people of Nigeria and Africa know that our hearts are with them in these hard times.”

In mid-2016, President Muhammadu Buhari left Nigeria in a highly controversial trip to the United kingdom to treat a ‘persistent’ ear infection not less than a year after he won the 2015 presidential election. The trip, which was to take 10 days, was to enable the President to meet with an “Ear, Nose and Throat” specialist after he was examined by his personal physician and an ENT specialist in Abuja.

The medical leave was, however, extended following concerns his health might get worse. An official statement advanced the leave was extended to enable the president to wait for the results of a series of tests that were carried out on him.

Mr Buhari ended up using seven weeks which fuelled anxiety among Nigerians who were spreading speculations about his health. Upon his return to the country, the president told newsmen he had never felt “so sick” as he felt during his stay in London for treatment.

So, who is behind the picture?

The ICIR ran a  check on one of the pictures which the poster claimed was the Queen’s condolence message, using Google reverse image tool to ascertain the time the image first appeared online.

The search, which showed seven results in 0.42 seconds, revealed that the earliest use of the image found by The ICIR was on November 18, 2018, in a post titled “Buhari’s cousin Mallam Daura attacks Nnamdi Kanu for insisting Jubril is Buhari” on one 9jaflaver.com

The blog claimed to have culled the excerpt of the interview from The Sun Newspaper, but The ICIR could not find the interview on the newspaper’s website.

The picture resurfaced on popular microblogging site, Twitter, on 26 November 2019,  in a tweet by one Akanimo Umah @AKANIMOUmoh5. The image which was then reposted by another user on the microblogging site @navimumbaiipob on October 2, 2020, at exactly 12:08 post meridiem, has gathered 414 retweets and 242 likes as of October 20, 2020.

The post attached images purported to be of  President Buhari’s death certificate and accused Her Royal Majesty of covering up the claim and conspiracy against the actualisation of the Republic of Biafra, a secessionist state that existed from May 1967 to January 1970 during Nigeria civil war.

By comparing Buhari’s pre- and post-medical leave physique, Nnamdi Kanu advanced that Buhari had died and had been replaced by a lookalike who he called “Jubril” from Sudan.

Since making the claim, several social media users have been reposting that president Buhari is an impostor with varying pictures to question his identity.

Although Nnamdi Kanu did not provide evidence to back the claim, he later denied making such an accusation.

However, the president, while responding to the claim in a town hall in Poland where he attended a United Nations climate conference,  regarded those peddling the false information as “ignorant and irreligious” people.

Discussions about the conspiracy rested from online arguments prior to the 2019 elections. But due to the protracted silence of the President over the Lagos Lekki shooting of the armless #EndSARS protesters, Nigerian netizens brought back the argument while many people fell for it.

The ICIR again conducted a search for media evidence of the Queen’s correspondence with Nigeria between  2017 to 2020.

The earliest correspondence found by The ICIR was the letter written by the Queen to felicitate with Nigeria on the occasion of her sixtieth independence anniversary.

The letter which was conveyed to the presidency by the British High Commission in the country called for a stronger bond between Nigeria and the United Kingdom.

“It gives me great pleasure to offer my warmest congratulations on the 60th anniversary of Nigeria’s Independence, together with my best wishes for your country’s continued happiness and prosperity,” the message read.

“The United Kingdom and Nigeria benefit from strong and enduring ties as Commonwealth partners through shared history and most importantly, our people. These are bonds that I hope and believe will flourish long into the future.” she wrote

Also, the featured image attached to the claim was used when Her Majesty signed the European Withdrawal Act which gave royal assent to the United Kingdom’s exit from the European Union on June 27, 2018. Our investigation also showed that the picture which was copyrighted to Wikimedia (Chatham House) has been used multiple times to illustrate events involving the monarch.

The ICIR also subjected the featured image to a metadata tool and it revealed that the picture was taken on 18th November 2014 at exactly 6:17 pm with NIKON D800 (camera) and by Ian Enness, a freelance photographer.

Based on the above findings, the claim that Queen Elizabeth II wrote a condolence letter is baseless and FALSE, just as the returning of the claim that failure of Buhari to address the #EndSARS protests on time does not constitute a sufficient condition to mislead citizens on the same issue that had been resolved since 2018.

Chat us on WhatsApp
Advertisement
Previous articleWTO election: EU endorses Nigeria’s Okonjo-Iweala, as US backs her South Korean counterpart
Next articleSARS detained me for 48 days, victim narrates ordeal to Lagos panel of inquiry