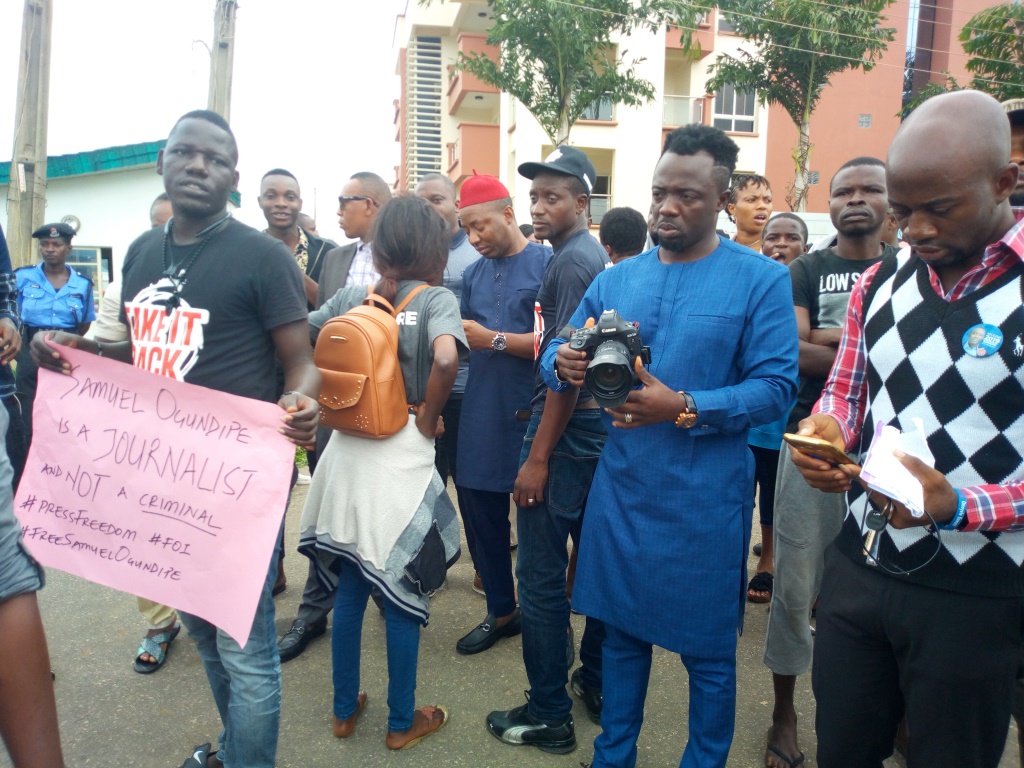 Officials of the Nigeria Police, on Thursday, released a teargas canister into a crowd of peaceful protesters, demanding the unconditional release of Samuel Ogundipe, detained Premium Times journalist.

Citizens of the country, under the aegis of “Concerned Nigerians”, gathered outside the Police Headquarters in Garki, Abuja, on Thursday morning to pressurise the authorities into releasing Ogundipe.

They were, however, suddenly teargassed after roughly two hours of peaceful demonstration and minutes before Jimoh Moshood, Police Public Relations Officer, exited the premises to address the protesters.

This caused many of those close to the protest ground to cough uncontrollably, as most begun covering their nostrils and rubbing their faces with various liquid substances to reduce the adverse effect of the gas.

During his talk, Moshood gave no response to the severally asked question on the permissibility of teargassing during peaceful demonstrations.

Also participating in the protest were members of the Our Mumu Don Do Movement, led by Charles Oputa (popularly known as Charly Boy), and the Take it Back Movement, campaign platform of presidential aspirant Omoyele Sowore.

Deji Adeyanju, convener of the Concerned Nigerian Movement and co-convener of the Our Mumu Don Do Movement, explained that the protest was triggered by the arrest and detention of Ogundipe whose only crime “was that he published a story”.

“The Police IGP is overseeing a reign of terror on Nigerians,” Adeyanju declared. “And we cannot remain silent. Silence is no longer golden.”

“It appears to everyone of us that decree 4 is back. That can only be the explanation for some of these actions. It will interest you that yesterday, Jones Abiri, a journalist who was detained for over two years, was just released by the court. What we have in place is a government that does not recognise free speech.”

He further requested the Inspector General of Police to respect the law, which has established that a journalist cannot be compelled to reveal the source of his information.

Omoyele Sowore, also addressing the protesters, said the Premium Times journalist was arrested because Nigerians made the mistake to vote in 2015 for a candidate who does not believe in press freedom. When he becomes president, he promised, police excesses will no longer be tolerated.

Ogundipe was arrested on Tuesday alongside two other journalists of the same media organisation and has remained in detention ever since. He was asked to reveal the source of a story written about an interim report to Acting President Yemi Osinbajo and authored by Ibrahim Idris, the Inspector General of Police.

On Wednesday, he was arraigned without legal representation before a magistrate court in Kubwa, which ordered that he be kept in detention for five days.