REALITY CHECK: 10 things Nigeria planned to achieve in 2020 but has so far failed to

YEAR 2020 is one Nigeria has looked forward to for a very long time. People in development circles had expected the year to usher in a new era of human development and economic prosperity. Plans were drafted, targets were set, and agencies were established. Now that it is here, how well can the country be said to have performed using the scorecards it created for itself?

In November 1996, then military head of state Sani Abacha set up the Vision 2010 committee and mandated it to come up with “a blueprint that will transform the country and place it firmly on the route to becoming a developed nation by the year 2010”.

The committee envisaged that, by 2010, Nigeria’s GDP growth rate would average 10 per cent every year, inflation rate would be less than 5 per cent, poor people would constitute no more than 20 per cent of the population, all able-bodied persons would be employed, rate of out-of-school children would be zero per cent, a minimum of 26 per cent of government budget at all three tiers would be devoted to education, and so on.

But, as you would have guessed, none of these was eventually achieved.

In 2009, Nigeria came up with another ambitious blueprint “designed to propel the country to the league of the top 20 economies of the world by 2020”.

The ICIR, in this report, flashes back to over 10 specific targets set in the document, as well as the National Population Policy, while contrasting them with the latest statistics.

Top among the goals set in the Vision 20:2020 document is that Nigeria will be “among the 20 largest economies of the world by 2020”, and it was, in fact, this that informed the choice of name.

“By 2020, Nigeria will have a large, strong, diversified, sustainable and competitive economy that effectively harnesses the talents and energies of its people and responsibly exploits its natural endowments to guarantee a high standard of living and quality of life to its citizens,” the document stated.

On the contrary, latest World Bank statistics show that Nigeria is today the 31st economy in the world in terms of Gross Domestic Product (GDP), despite a 2013 rebasing exercise that nearly doubled the figure. Nigeria’s current position, 32nd, is only slightly better than its ranking back in 2009.

“The desire to achieve the goals of NV20:2020 compels the economy to achieve broad-based double-digit growth rates,” the 2009 document advised.

“During the vision period, the economy is expected to grow at an average rate of 13.8 per cent per annum, to be driven by the agricultural and industrial sectors over the medium-term while the manufacturing and service sectors are expected to drive the economy towards the end of the Vision period.”

Instead, however, Nigeria’s GDP growth rate has declined significantly. According to data from the World Bank, it was 8 per cent in 2009 and 2010 and has not gone any higher sine then. In 2018, the figure was 1.9 per cent, less than a quarter of what it started the decade with. And for a year, between August 2016 and September 2017, the country, in fact, slipped into a recession owing to negative growth rates.

According to the 11-year-old document, another aim of vision 2020 is to increase crude oil production and refining capacity “to stimulate local value-addition and to put the country in a position to meet its domestic demand for refined products and even export refined products”.

Also, “we aim at developing the gas sector to meet domestic and industrial demand and to take advantage of global markets. To this end, the local content initiative in the sector will be revived. As a starting point, in pursuit of the NV20:2020, the Local Content Bill and the Petroleum Industry Bill [PIB] are passed into law.”

One, Nigeria’s crude oil production has rather worsened over the years. According to the Central Bank of Nigeria, in 2009, Nigeria produced an average of 2.11 million barrels per day (mbd) and exported 1.66 mbd. In contrast, between January and June 2019, domestic production was an average of 1.9 mbd and export was 1.54 mbd.

Finally, while the Local Content Bill was signed into law in 2010 by former President Goodluck Jonathan, the PIB (first introduced in 2008) has yet to become law. Senate President Ahmed Lawan recently promised it will be passed before 2020 ends.

“The NV20:2020 recognises that the creation of a favourable environment for free movement of goods and services is critical to trade. The plan is to drastically reduce bottlenecks and constraints to trade,” states the Vision 2020 document. But recent events suggest this policy may no longer be the Nigerian government’s priority.

In October, President Muhammadu Buhari ordered that the country’s land borders be closed indefinitely to the import and export of goods — despite the free movement policy of the Economic Community of West African States (ECOWAS). Already, this has triggered some backlash from ECOWAS countries, especially Ghana where Nigerian traders have been forced out of business. 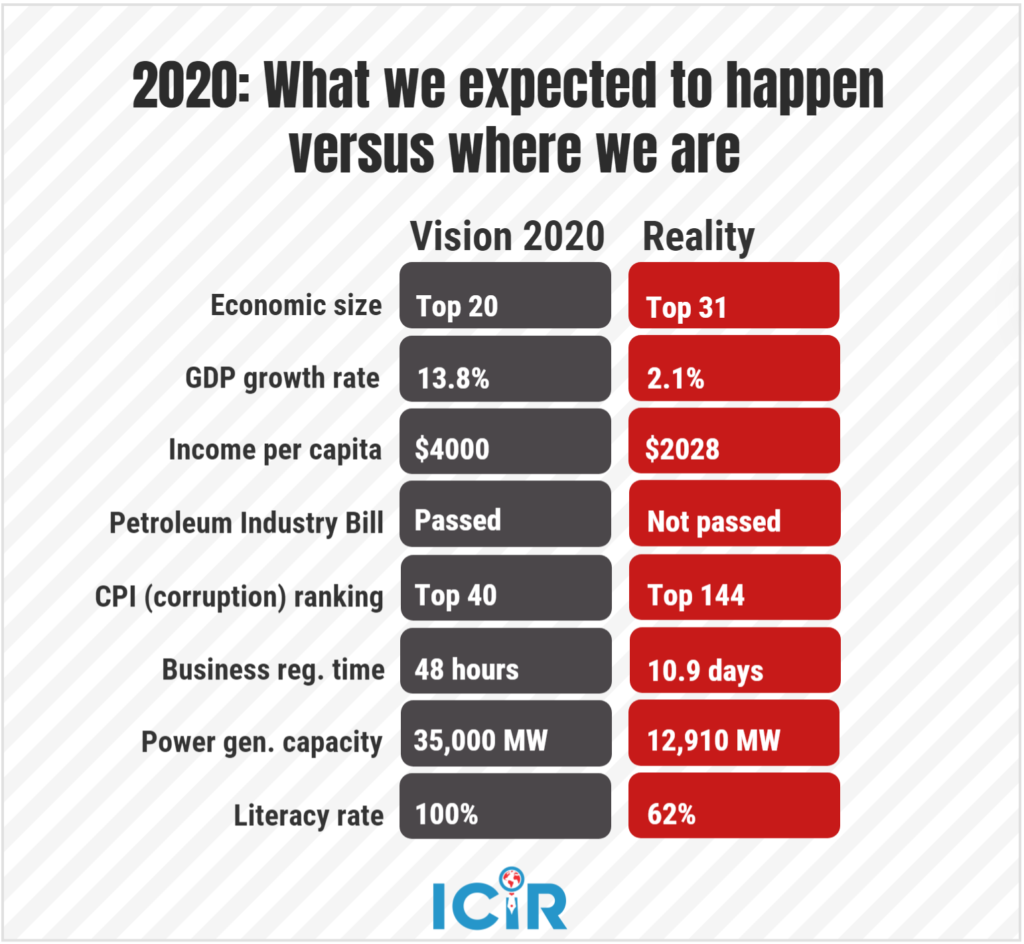 According to the plan, “public enterprises such as refineries, power, steel industries, and railways will be privatised while a code of values and ethics for public servants will be introduced to improve morality and conduct in the public service.”

This is, however, not yet fully the case.

Despite multiple efforts to have it privatised, including an assurance from former Minister of Solid Minerals Development Kayode Fayemi, the Ajaokuta Steel Complex is still the government’s responsibility. Minister of Mines and Steel Development Olamilekan Adegbite said in November that the government has ruled out the privatisation of the complex and the National Iron Ore Mining Company (NIOMCO).

“Nigeria is currently one of the most corrupt nations in the world with a ranking of 121 out of 180 countries on the Corruption Perception Index (CPI),” the vision document admitted.

“NV20:2020 aims to stamp out corruption and improve Nigeria’s ranking on the CPI to 60 by 2015 and 40 by 2020. The Vision aims to minimise corruption by creating wealth and employment opportunities; reducing poverty and ensuring the social security of Nigerians.”

Contrary to the projection though, Nigeria has dropped in the annual corruption perception ranking exercise. In 2015, the country was ranked 136 with a score of 26. In 2018, the country got a worse ranking of 144 but with a slightly better score of 27.

It further said the government will introduce market-friendly policies to encourage investment as well as decentralise the control of such institutions as the Immigration Service, Nigeria Police, Corporate Affairs Commission, rail and air transportation management agencies, and so on.

“The government will also reduce the business registration time to a maximum of 48 hours and harmonise all tax systems and payments channels to reduce multiple taxation,” it added.

Today, Nigeria’s ranking has dropped in both reports. In 2019, the country ranked 116 out of 141 countries on the Global Competitiveness Index and, in the 2020 Ease of Doing Business Index, it ranked 131 out of 190 countries. The latter report noted that Nigeria has reduced “the time needed to register a company and by improving online platforms” but business registration time is still 10.9 days—not two.

According to operational reports from the Nigeria Electricity System Operator, Nigeria’s installed generation capacity has been 11,165 MW since at least 2014. It increased to 12,910 MW in January 2019 and has not increased since then. Peak generation, on the other hand, has never surpassed 5,375 MW.

It is not only the Vision 2020 document that has a development plan for this year. Nigeria’s National Policy on Population for Sustainable Development of 2004 also contains targets on demography, education, and health. While most have 2015 as the end date, one of the targets was set five years later: the elimination of illiteracy by 2020.

Vision 2020 itself was formulated after the country failed to achieve the targets set in Vision 2010, which was launched in 1997 during the regime of military ruler Sani Abacha.

Chairman of the Senate Committee on National Planning and Economic Affairs, Olubunmi Adetunmbi, hinted in November that stakeholders from all over the country would soon meet to draw up a fresh plan.

“I met with the Ministers of Finance and even that of National Planning during the week ahead of the retreat, and we are hopeful that the outcome will be different this time. The members of the National Economic Advisory Council will also be on ground to take part in the process,” the lawmaker said.

NIGERIA's small and medium enterprises are in for more difficulty in access to finance...

OPERATIVES of the Economic and Financial Crimes Commission (EFCC) on Tuesday stormed the Abuja...
Advertisement