THE use of electronic mails for the swift exchange of information has been in vogue for about five decades. Accompanying the invention of the internet, emails have no doubt transformed how people communicate.

Across the world, people — and governments — are today taking the technology seriously, if not religiously, as a way of making enquiries, sending notifications, seeking job placements among other needs. The Nigerian federal government (FG) is, however, lagging behind the developed world in embracing this important tool, as The ICIR discovers in a reality check.

On Wednesday, October 3, an enquiry was sent to twenty six (26) official email addresses belonging to twenty four (24) federal ministries, including the Office of the Secretary to Government of the Federation (OSGF).

In the email, The ICIR asked to “confirm if the Ministry or any department under it has recently put out a call for job applicants”, and also requested for information on when next the ministry is likely to make such a call.

A week after, October 11, a reminder was sent to the addresses which had not responded to the previous mail. In spite of this, the vast majority of the ministries ignored the emails.

‘Delivery has failed to these recipients’

Not long after the email was dispatched to the various addresses, automatic responses began to pour in from the hosting companies’ postmaster informing the reporter that “delivery has failed to these recipients or groups”.

“The email address you entered couldn’t be found. Please check the recipient’s email address and try to resend the message. If the problem continues, please contact your helpdesk,” the notification added.

While some of the ministries have alternative contact emails, for others, the unavailable addresses are the only ones provided on their websites. “Info@nigeria.gov.ng”, provided on the country’s official website, was also found to be invalid.

Only 4 in 24 ministries replied

Eighty-three percent, that is up to 20, of all the 24 federal ministries emailed did not respond at all, despite the sending of a second mail after one week. Of the 26 addresses mailed, 11 are not available; and of the 15 which are valid, only 3 responded.

The first ministry to respond was the Ministry of Finance. After only two hours, a reply came from Magaji Musa Mohammed, whose address was not one of the original recipients.

“Good afternoon,” he wrote. “The Ministry of Finance is not responsible for recruitment. It is Federal Civil Service Commission that has the right to recruit. Thank you.”

Four hours after the mail was dispatched, a second reply came from the Ministry of Power, Works and Housing.

An hour after a reminder was sent at 11:46 am on October 11, a response came from the Ministry of Industry, Trade and Investment. “Dear Adekunle Adebajo,” it said, “the Ministry, for now, has not placed any advertisement for any vacancy. So please ignore the rumour.” 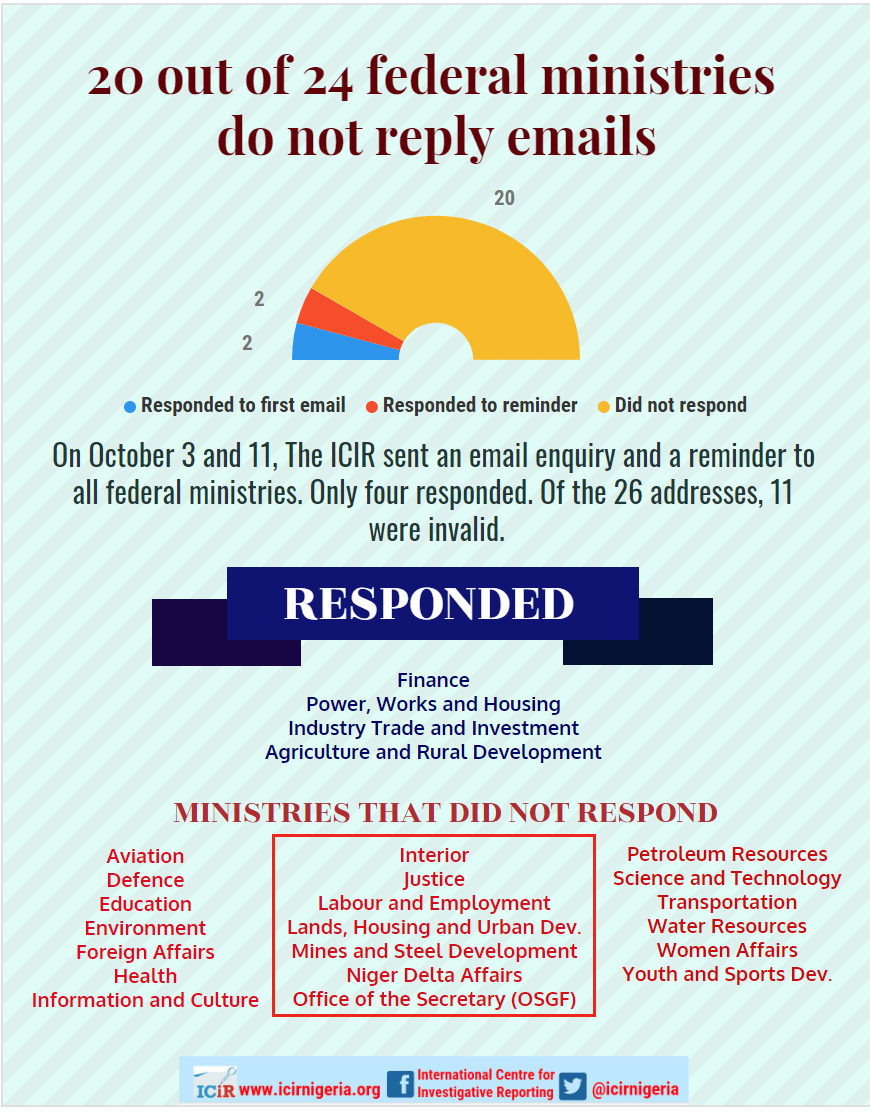 Out of all the federal ministries studied, six (25 percent) have no email addresses stated on their website. These include the Ministry of Education, Information and Culture, Science and Technology, Defence, Interior, and Finance.

With the exception of the Finance, all of these ministries have contact forms on their sites through which members of the public or other interested parties may make enquiries. However, none of the enquiries sent through the forms, though acknowledged, was replied.

The ICIR has also observed that the website of the Ministry of Finance has been unavailable for several weeks, and that of Women Affairs has been restored only recently. Snapshots from Wayback Machine, an internet archival tool, show that they were accessible earlier in 2018.

When the Women Affairs Ministry’s website was visited on October 3, the error notice announced that the service has been blocked.

“This is a Federal Government of Nigeria service,” it said, “and access to the web page or streaming service you require has been blocked in accordance with Acceptable Use Policy (AUP) restrictions from 9am to 4pm on weekdays.

“If you require this restriction lifted, please call the Galaxy Backbone Service Desk on 09-4621544 or send an email to: servicedesk@galaxybackbone.com.ng.”

The website presently takes at least ten minutes before it is opened regardless of the internet browser in use. Then again, Aisha AlHassan is still stated as the Minister of Women Affairs — though she resigned nearly three months ago on August 1.

For the Ministry of Finance, while the homepage is not available, the Whistleblowing Portal which is a sub-domain is functioning. As a result, the email enquiry was sent to this portal and the Budget Office. 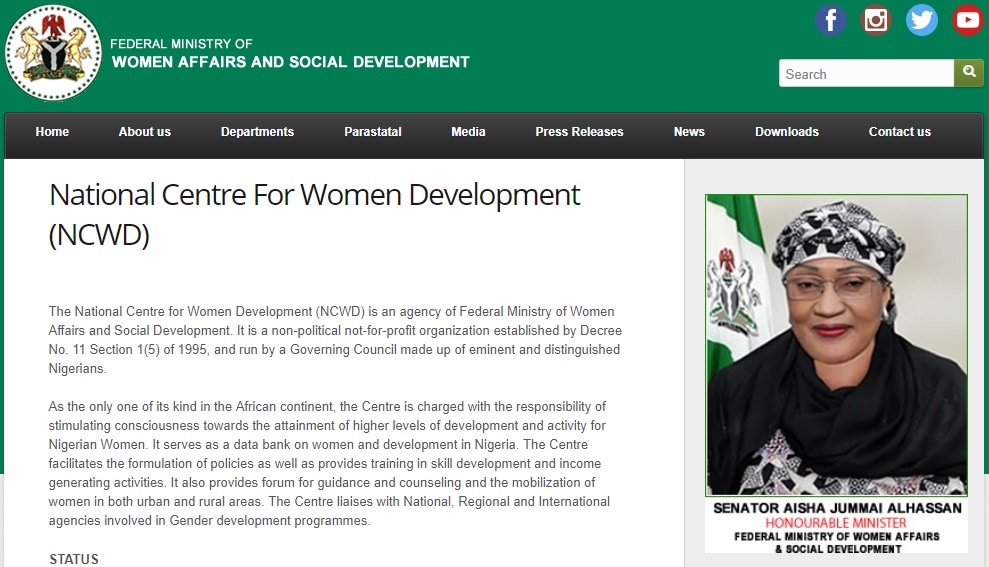 Hilary Onyeka, an Abuja-based web developer, told The ICIR various factors could be responsible for mails sent to certain addresses returning mailer daemons. According to him, it may be that the email address was not created in the first place but was publicly displayed.

“Also, when creating an address on the mail server, it would create a directory for that address as well as a username. The username might have been created but there is no directory where sent mails will be delivered to,” he added.

Onyeka further explained that hosting websites on Virtual Private Servers may lead to difficulties in setting up the mail sever, and recommended that the task is outsourced to email services such as Migadu.

He also urged persons mandated to respond to electronic mails for ministries as well as other organisations to ensure they login using their mobile email applications. This, he said, will ensure they receive real-time notifications as soon as mails are sent to them.

The ICIR texted Lai Mohammed, Nigeria’s Minister of Information and Culture, on Tuesday to ask why his ministry does not have any visible email address and why an enquiry sent through the contact form was not replied. The minister, however, did not provide any response. Likewise, a call to his number on Wednesday for the same purpose was dropped.

Segun Adetola, Assistant Press Director at the Office of the Secretary to the Government who oversees electronic communications, told The ICIR his office is not aware of any enquiry and asked for the address used.

“This is not our e-mail,” he replied after the address was provided, though it is what is stated on the office’s contact page.

“Looks like one of those that the scammers are using,” he added. “However, I need to meet you before releasing our mail address.”