A NEW survey conducted across six tertiary institutions in Lagos State has revealed that most students believed that indecent dressing is responsible for prevalence in rape and sexual abuse on campuses.

According to the findings of the survey conducted by the Africa Polling Institute (API) and Heart Minders Advancement Initiative and made public on Tuesday, 63 per cent of polled students said inappropriate and indecent dressing is a leading factor to rape and sexual harassment on campuses.

Other factors, the survey revealed were cultism, inadequate campus security, and indiscipline on the part of both students and lecturers.

“This report corroborates the recent BBC Africa Eye Documentary on Sex for Grades, which went undercover to investigate the “open secret” of sexual harassment in Universities in Nigeria and Ghana, West Africa, and to unearth some of the challenges faced by victims of sexual abuse in tertiary institutions,” the statement said.

“Tertiary Institutions in Nigeria have been at the spotlight in recent times, with increasing allegations of sexual harassments and abuses on campuses. It has been reported that authorities of tertiary institutions have shown very little efforts at addressing the menace; with anecdotal evidence revealing that some authorities rebuff reports of sexual abuse and harassment in the spirit of collegial camaraderie.

“And in some cases, students who reported such cases are further victimised by the same academics, their colleagues, and often the institutions.”

Up to 61 per cent of the students acknowledge the prevalence of sexual abuse on campus and 79 per cent identified female students as the main victims. Also, “Student Cultists (33 per cent), Fellow Male Students (29 per cent) and Male Lecturers (21 per cent) were identified as the major perpetrators of these reprehensible acts of rape and sexual abuse.”

“Curiously, 14 per cent of respondents stated that some Female Students are also perpetrators of sexual abuse on campus; thus highlighting that the act isn’t carried out by the Men alone, but in some cases, women are also involved,” the statement added. 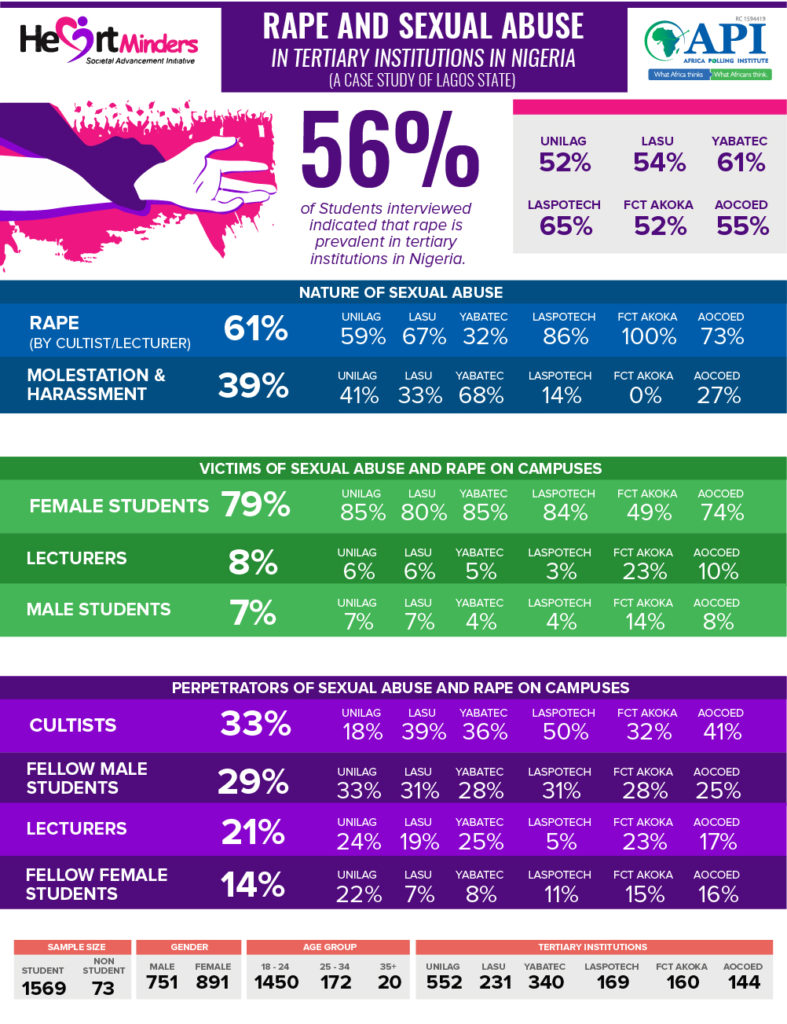 “In addition, authorities of tertiary institutions have a huge responsibility of enforcing strict policies and guidelines aimed at curbing incidence of campus cultism.”

API and Heart Minders hope the results of the survey would encourage school authorities to partner with other stakeholders and decisively address the problem of sexual abuse, and also trigger civil society groups to “intensify their campaign and advocacy against rape and sexual abuse across the country; especially on campuses.”

The findings of the survey, particularly on indecent dressing, seem to be in line with similar surveys conducted elsewhere.

A survey conducted in the United Kingdom in February also found that 55 per cent of men and 41 per cent of women have the impression. The connection between sexual abuse and dressing is, however, open to question.

“While people perceive dress to have an impact on who is assaulted, studies of rapists suggest that victim attire is not a significant factor. Instead, rapists look for signs of passiveness and submissiveness, which, studies suggest, are more likely to coincide with more body-concealing clothing,” notes Theresa Beiner, Dean and Nadine Baum Distinguished Professor of Law at the University of Arkansas.

SARS officers threw me from two-storey building, broke my…