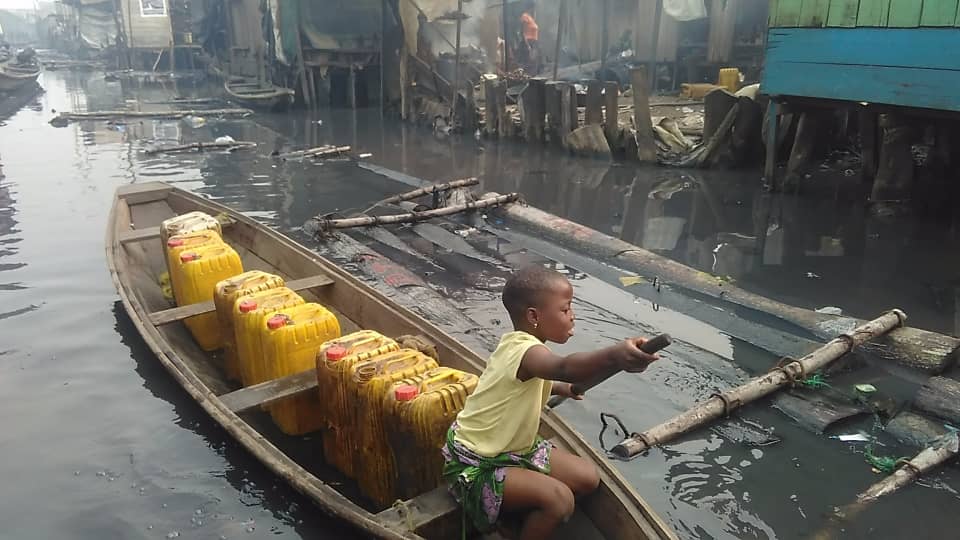 ALTHOUGH the plastic container held little water, Hopunke Abigail, 23, still bent it over the cup. She was thirsty, but this action is about to change her perception of the water she has drunk all her life.

Abigail had fetched the water from a ‘clean water borehole’ in her community two days ago. But the big blobs of brownish substances she spotted in the liquid had her rooted to the spot in shock.

Abigail’s family had drunk from the same container the previous night at dinner and a few hours ago during breakfast too.

“Come see!” she called to her sister from the shanty storeroom that also serves as a kitchen for the family of seven.

Abigail’s house, like every other structure in the community, is built from wooden planks on poles driven deep into the waterbed more than five feet over the murky waters of the Lagos lagoon.

“We have been cooking and drinking germs”, said the bewildered girl, handing the cup of water to her companion.

According to the 2020 United Nations water fact report, over 2.2 billion people lack access to safely managed drinking water services, and the sitch is quite gloomy for Africa’s most populated country.

And for Abigail, whose family lives in Makoko, Nigeria’s largest floating slum in Lagos state with no infrastructures like electricity and proper waste disposal services, potable drinking water is a luxury.

The blight in a glitz

With a dynamic and boisterous economy of its own, Lagos State is the fourth largest and the fastest-growing economy in Africa, with an estimated population of over 14 million people and a Gross Domestic Product (GDP) set at $96 billion.

Despite its wealth, the city has not solved its water problems as residents living in slums like Makoko are without access to potable water and resort to drinking from contaminated open wells and boreholes at a cost.

Makoko, originally founded as a floating fishing community, is home to an estimated population of over 85,000 people – the slum was not counted during the 2006 census.

Living in crudely constructed wooden shacks that locals claim their ancestors have lived on these waters for over a century, the occupations of residents in the community are mainly fishing and sand dredging.

“On 22 July 2012, the Lagos state government under the administration of the then governor Babatunde Fashola sent us a letter of eviction to evict us from our homes and in less than 72 hours, the security operatives which started enforcing the governor’s directive killed Timothy who was a chief in the community. 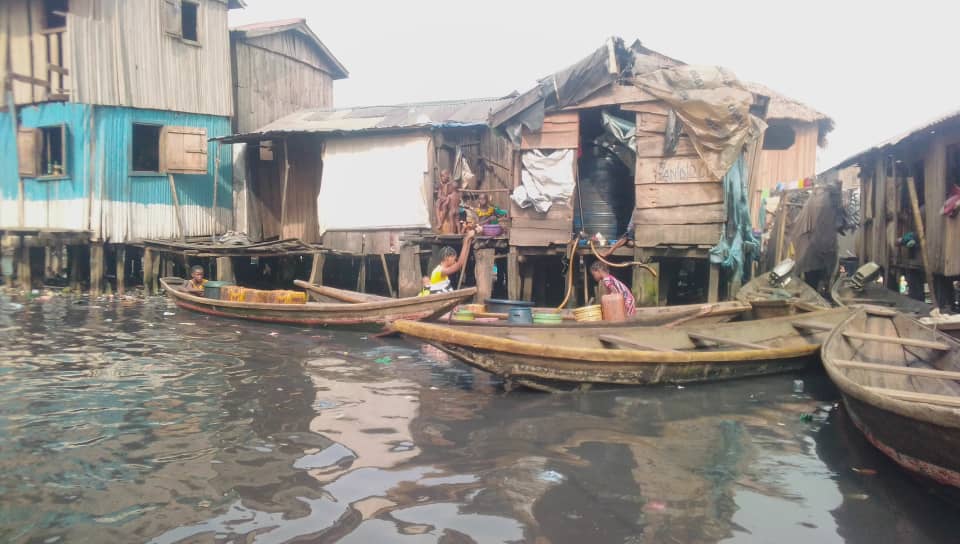 “We were promised hospitals, schools and water after that incident but we have not seen anything. Nobody remembers us in anything now,” he said.

Tucked away in a universe of its own, the residents of the slum live in constant trepidation of their government and depend on each other to provide required amenities for themselves.

Girls at the frontline

Husu Bola, 14, always hopes that the water containers in her house are not empty whenever she comes back home from school.

Being the youngest child in a family of eight, her daily chore involves getting water for the family which is a less enticing task. Bola makes the exhausting trip twice every day, on some days before and after school.

Speaking to this reporter, Bola said she often arrives late to school which she blames on the domestic routine of fetching water as she prepares for the common entrance exams into secondary school.

“My friend Elizabeth follows me sometimes to the borehole. When I get tired she helps me row the boat. I also help her when she is going to fetch in their house. We are in the same class,” she explained.

According to 2018 data obtained from the United Nations International Children’s Emergency Fund, UNICEF, when water is not connected directly to the home, the burden of fetching it falls on the women and children especially in Sub- Saharan Africa.

The statistics revealed that women and girls spend more than 25 to 33 minutes daily in rural and urban areas respectively on one round trip to collect water, often done twice or more, a task that could make the girl-child lag in her academics.

Bola purchases 10 containers of 20 litres of water daily sold for ₦200 (49 cents). This quantity barely serves her large family’s drinking, hygiene and cooking needs for a  day even when frugally rationed.

This contradicts the position of the World Health Organisation, WHO, which stipulates that 20 litres of water daily should be the minimum requirement per individual for their basic hygiene needs, excluding amounts needed for laundry and bathing, which demand larger quantities of water. 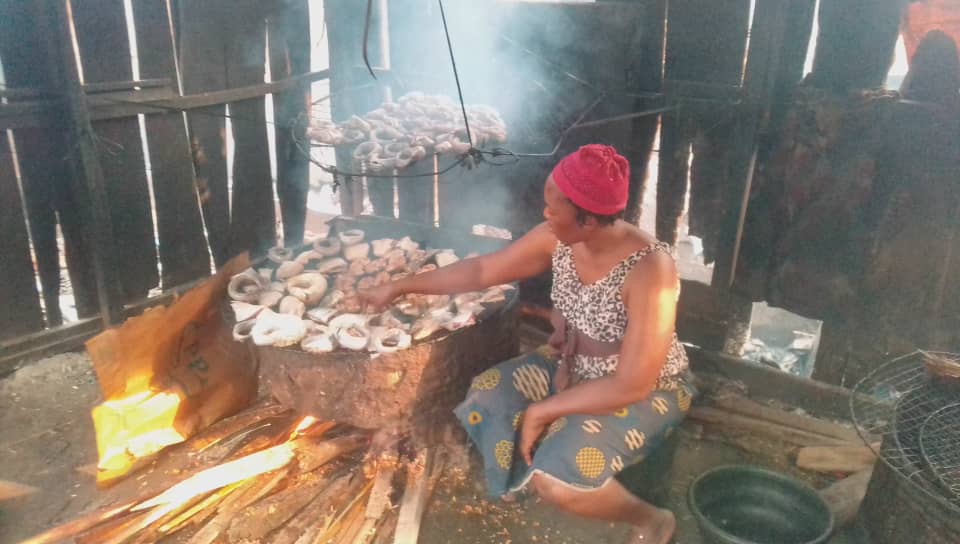 Bola’s parents who try to keep the family afloat through the little profits that come from selling fish in the community spend at least an average of N6,000 monthly on their domestic water needs in a country where almost 50 per cent of the population survive on less than ₦700 ($1.90) daily according to the world poverty clock.

The sun had set when Bola managed to row her canoe down to a privately owned borehole. In between paddles, she stops to stuff her mouth full with cuts of biscuits—a remnant from her lunch pack.

“I have to fetch water every day. But I will soon stop. My older brother said when we move to the Mainland, we will have water in the house,” she said with a big grin, revealing little tiny dots on her chin.

Until then, she will have to join the queue at the borehole and wait her turn before she could fetch water this evening.

Poisons in their cups

In Makoko, the idea of boreholes is 500 to 2,000 litres of water tanks connected to metal pipes that run underwater from close water sources on land.

These substandard constructions owned by individuals provide the only source of ‘usable’ water to households and businesses living in the slum.

However, unknown to the residents, every drop of water drank from the submerged pipes, could be killing them.

Results of laboratory analysis on 20 water samples collected from drinking water sources in the slum revealed that they were unfit for consumption based on the World Health Organisation parameters.

The test carried out by the University of Lagos Consults in collaboration with Code for Africa showed that the samples were highly acidic with a low Potential of Hydrogen (PH) of 3.3 to 6.2 and compared to the 6.5 to 8.5 standard of the World Health Organisation.

This finding is no wonder, as total dissolved solids (TSD) and suspended particles found in some of the drinking water samples were equally very high at 562.0 to 625.0(ppm) against 500(ppm)  WHO standard.

In this floating slum, sights of gleeful half-clad and naked children playing water games in the brackish lagoon water and canoes of different sizes ferrying passengers, goods and eatables are normal activities.

However, the highest level of TSD detected in a sample at 198,70.0(ppm) which is 40 times higher than the WHO standard was from the lagoon and tested positive for E-Coli, with a Nitrate level thrice the WHO Limit of 30 (ppm).

A pungent odour was also detected in the water linked to trace amounts of Ammonia, an indicator of faecal pollution which can affect the taste and easy purification processes of water.

According to Dr Bridget Nwagbara, public health analysts and researcher, proper sanitary facilities deprivation in the slum heightens the possibilities of water contamination.

“E-Coli in water has public health implications for both adults and children. It can lead to chronic malnutrition, poor brain development with cognitive impairment and growth stunt in children.

“This bacteria can also cause infections such as acute watery diarrhoea and dehydration,  and worse, result in death”.

While more than 70,000 children under five die from the water-borne disease in Nigeria annually, Ojoniyi Oladipupo, a chartered Chemist and Environmental Analyst at the Unilag Consult, also observed that the slum could be at the precipice of chronic Lead poisoning as high levels of lead were also detected in its drinking water sources.

Also, three drinking water specimens including the sample drawn from the lagoon lack the colourless quality of potable water, having a brownish hue.

The murky lagoon water upon which the slum is anchored unfortunately also no longer supports marine life.

Based on data from the UN-Habitat 2018 report on world development indicators, 53.9 percent of the population of Nigerians live in informal slums in urban areas in impoverished conditions and cannot afford proper health care.

Shounde Monday, 27, a nurse and resident of Makoko in an interview with this reporter noted that the health of residents in Makoko especially that of women and children is on a downward slide.

“When you see the darkened insides of water containers in Makoko, the harsh reality of the implications of the harm that bad water is wrecking on their health hits home.

“No week goes by that I don’t administer treatment for malaria or typhoid for children and women.

“The truth is that there is so little that Artesunate, Ciprolaxion or Azythromicin treatments can do if the cause of the ailment is constantly ingested the same way these drugs are taken,” Monday explained.

Despite the waning health conditions of residents, leaders of the settlement expressed little enthusiasm about any government interventions in the beleaguered community.

“During the COVID-19 lockdown, we had fish but nowhere to sell them and with our large families, we all shared the little materials we had,” said the chief’s son.

“Some families have up to 10 to 20 persons living together and don’t even have enough money to feed. So, they cannot keep buying sachet water at N150(39 cents) for 20 sachets.

“I know that the water we drink is not properly treated, but in the end, we drink what we have and pray that we are safe,” he said in a resigned voice.

Meanwhile, in this slum, unorthodox herbal remedies are the primary medication mainly used by residents in the community.

Although Nigeria is a signatory to the Sustainable Development Goals SDG, of which goal 6 specifies that by 2030, countries who are part of the pact should achieve universal and equitable access to safe and affordable drinking water for all their citizens.

However, it is unlikely Nigeria will meet this target, Wilson Atumeyi, a water activist who tracks government spending for water, sanitation and hygiene in rural communities blamed the government’s lack of political will in making the goal realisable.

“Zero access to safe water supplies is due to government negligence, and systemic corruption,” he said.

Perhaps, taking a leaf from Bangladesh water and sanitation management strategies in Chattogram slum where anecdotal evidence has proven that collaboration between state, and non-governmental bodies have helped in the provision of access to treated drinking water has greatly improved the health and sustainability of slum dwellers.

Attempts to reach the Lagos state ministry of environment and water resources and Water Corporation through multiple emails and phone calls to the agencies and its spokespersons were snubbed.

Bola still dreams of the day she will move into a house with running water just like in the movies.

But sadly, while the government turns a blind eye to their plight, families in Makoko slum will keep drinking water that is killing them, and the future of their children held hostage.

This WanaData Story was supported by Code for Africa as part of the WaterCommons initiative and the Code for All Exchange Program, funded by the National Democratic Institute and the National Endowment for Democracy.