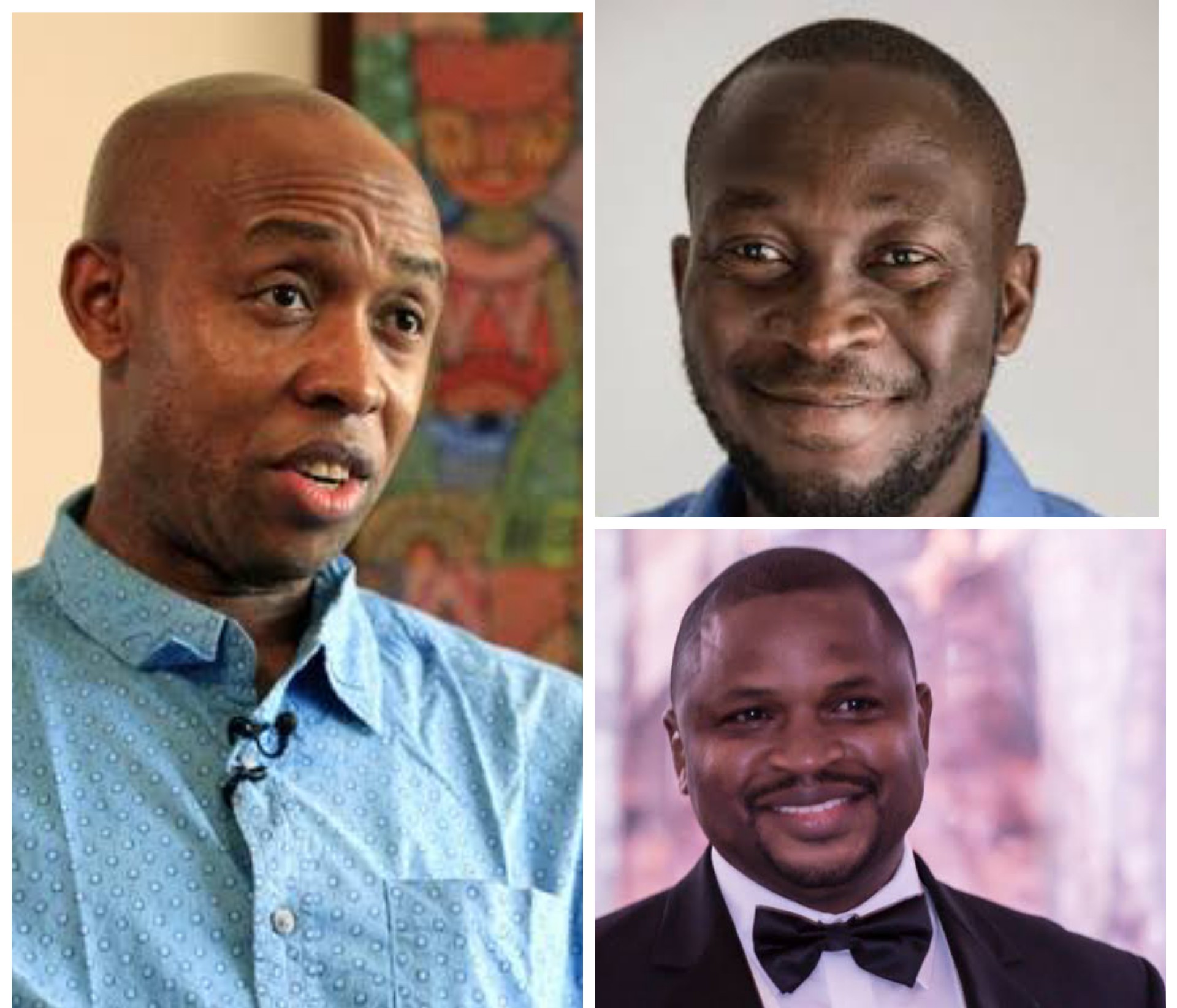 Twitter has locked the handle @Witan17, (Na’Gwaggo) believed to be a pseudo name, for using the platform to spread hate speech.

This means that the owner of the handle cannot use it to post or update old posts. The handle also faces the possibility of being fully suspended.

Twitter took the decision on Saturday following a flood of calls for it to pull down the handle, which on Friday apparently publicly called for the execution of three prominent Nigerians: Chidi Odinkalu, former National Human Right Commission, NHRC, chairman; Farooq Kperogi, Professor of Journalism and Emerging Media at Kennesaw State University and Ahmad Salkida, a journalist who specialises in conflict reporting.

Na’Gwaggo on Friday tweeted “@ishakaa we need to do plenty of such to people like @A_Salkida @faooqkperogi so @chidiodinkalu can twerk his life away.

To explain exactly what he meant, the Twitter user referenced another tweet by @DonKlericuzio (Edward) who on June2 had said ” Iran Thursday executed Colonel Jamal Haji Zavareh an Iranian IRGC officer for espionage against Iran. He was accused to have being working against Iran’s interest on behalf of Israel and Russia.”

Edward’s tweet had a photograph with several persons, including three men in military uniform, who appeared to be undergoing some kind of trial.

@Witan17, Ishakaa and @tfx47 are known to be strong supporters of President Muhammadu Buhari-led administration on social media.

A check on their twitter handle shows them tweeting in support of the ruling government’s policies and attacking those who have posted against any plans by this administration, trolling their handles with threat and condemnation.

Na ‘Gwaggo’s call to arms on social media has elicited enormous condemnation, with many calling for him/her to be arrested and for Twitter to pull down the handle.

Social Commentator and member of the Bring Back Our Girls movement, (BBOG), Aisha Yesufu, condemned the tweet and called on twitter to suspend the account of both social media users stating that the posts could lead to violence.

She said, “Dear @Twitter my account has repeatedly been suspended for stating that the President of my country is incompetent, clueless, inept and a failure #ICIF which he is. These fellows @ishakaa @witan17 @tfx47 call for harm to citizens all the time so why are they still here?”

Also responding to the threat post by the social media users, Odinkalu called on Twitter administrators to take down the handles of both Na’Gwaggo and Abdul Ishakaa.

He said, “I am today requesting @Twitter formally to take down the handles of @ishakaa & @witan17 for using the platform actively to advocate killing. I have also instructed appropriate notification to #Nigeria’s security authorities.

I am today requesting @twitter formally to take down the handles of @ishakaa & @witan17 for using the platform actively to advocate killing. I have also instructed appropriate notification to #Nigeria's security authorities. pic.twitter.com/ftrBTQZIzR

“U may dislike @farooqkperogi or @A_Salkida or @ChidiOdinkalu but it’s another thing to openly advocate their extermination. When that happens, the rules of the platform have clearly been violated & @twitter has a duty to apply the rules firmly.

Ishakaa in reply to Odinkalu tweet’s said, “The same @A_Salkida that has become the spokesperson of the Boko Haram terrorist group, who on daily basis post fake pictures of our fallen heroes? The three of you are the most dangerous fake news purveyors in the whole universe, constantly exposing the @HQNigerianArmy to danger.”

Also condemning the call for his execution, Salkdia, in a series of tweets stated:

“We know what @witan17 represents. It is that shameless cult of personal supremacy above nation and democratic values. Faceless characters like this hide under pseudo-regime supremacy to do incalculable damage to national ethos and sanctity of life.”

“Nigeria is actually at such critical point where characters like this without any claim to professional heritage will go to any length to shut out every voice of democratic dignity, every passionate work of journalism and every expression of the human conscience.”

“The forebears of journalism never promised us a day when the desperate wickedness of the lawless tribe will be no more. Rather, they assured us that they could be found among every generation and that our duty is to use the amour of truth to make them eternally uncomfortable.”

Twitter on Saturday said the handle @Witan17 had been locked for breaking its rules. 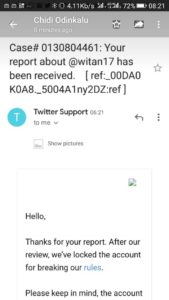 The tech company said to one request made for the handle to be suspended, “After our review, we’ve locked the account for breaking our rules.”

“Please keep in mind, the account does have the option to take the actions we’ve requested to have their account unlocked. This can include deleting the Tweet(s) that violated the rules, having their account features be temporarily limited or updating specific information on their account.”

But Ishakaa in his reply to Odinkalu’s complaint to Twitter said, “Good morning patriotic Nigerians, yesterday in an unprecedented move @ChidiOdinkalu who is arguably the most dangerous fake news purveyor in the world led the yahoo yahoo NGO/CSO community in Nig demanding Twitter suspend my account for exercising my right to freedom of speech.”

Good morning patriotic Nigerians, yesterday in an unprecedented move @ChidiOdinkalu who is arguably the most dangerous fake news purveyor in the world led the yahoo yahoo NGO/CSO community in Nig demanding Twitter suspend my account for exercising my right to freedom of speech

The Nigerian government only recently expressed alarm at the increasing use of social media to spread hate speech and fake news, promising to introduce new regulations to stem the tide
The Minister of Communication and Culture, Lai Muhammed during a press briefing outlining the government’s plan said the Federal government plans on sanitizing the social media against fake news and hate speech.

He said, “Gentlemen, since we inaugurated our reform of the broadcast industry, many Nigerians have reached out to us, demanding that we also look into how to sanitize the Social Media space.”

“I can assure you that we are also working on how to inject sanity into the Social Media space which, today, is totally out of control.”

“No responsible government will sit by and allow fake news and hate speech to dominate its media space, because of the capacity of this menace to exploit our national fault lines to set us against each other and trigger a national conflagration.

“That is why we will continue to evolve ways to tackle fake news and hate speech until we banish both,’’ he said.

While the government plan has been deemed an attack on free speech and media oppression in some quarters, the tweet by Na’Gwaggo and the controversy it generated culminating in Twitter clamping down on his/her handle, might be the very first test of bot the resolve and sincerity of the government to deal with the misuse of social media platforms. Na’Gwaggo, Ishakaa and @tfx47 threat falls under the CyberCrimes (Prohibition, Prevention, ETC) ACT, 2015.

Section 24 which deals with cyber stalking makes it an offence to threat or bully anyone using a computer Cybercrimes Act.

Any offender is liable to a jail term of between five and ten years or a fine of up to N25 million.

Olayinka SHEHU
Comments
We need your support to produce excellent journalism at all times.

Cryptocurrencies, other virtual assets are risky for Nigeria…