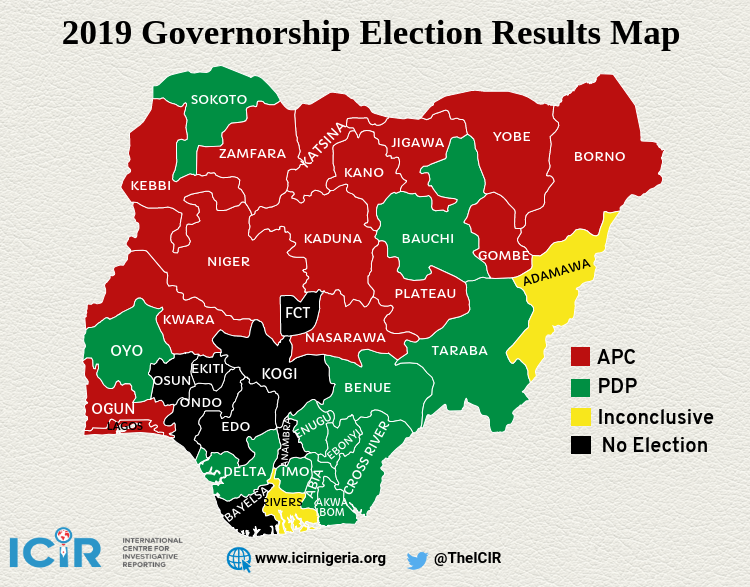 NIGERIA is gradually transforming to a two-party system despite having 91 registered political parties and the 1999 constitution recognising multi-party democracy.

Going by the results of the 2019 general elections, the winners of the governorship  are shared between the ruling All Progressives Congress (APC) and the opposition Peoples Democratic Party (PDP).

Of the 29 states that candidates vied for governorship, 27 have already announced the winners. It remains only Adamawa and Rivers to conclude the  gubernatorial elections.

Based on the results, only the APC and the PDP shared the 27 states so far declared by the Independent National Electoral Commission (INEC) as at March 26.

Projections indicate that PDP is most likely to win in Adamawa and Rivers states. Based on the March 9 results, PDP is leading in Adamawa with a total of 367, 611 votes against the APC’s 334,995 votes. A supplementary election that will conclude the gubernatorial election in the state has been scheduled for  Thursday, March 28.

APC does not have a gubernatorial candidate in Rivers State. The state has been a stronghold of the PDP as the party has ruled the state since the return to democratic governance in 1999.

Apart from the gubernatorial elections, the presidential election has shown that Nigeria is heading towards a two-party system. Both the PDP and the APC had a combined total of 96.82  per cent of the total votes, leaving 71 other parties to jostle for the remaining 3.18 per cent.

According to INEC, with a total votes of over 27 million, more than 26 million votes were shared between the APC and the PDP.  The APC won the presidential election with 15,191,847 votes while the PDP secured a total of 11,262,978 votes. This left the 71 other parties to share the remaining 869,758 votes, not even up to a million.

Chat us on WhatsApp
Advertisement
Previous articleCyclone Idai: Fortune smiles on woman who walked 17km to offer aid to victims
Next articleFACT CHECK: Did Buhari budget N79m to have his haircut in 2019?