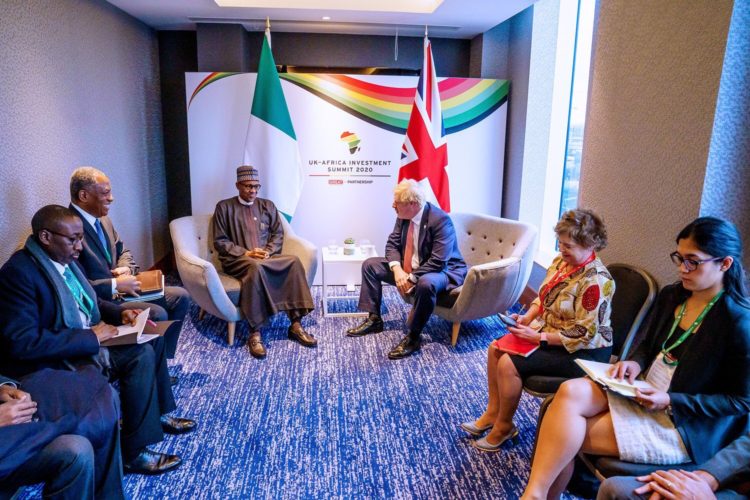 PRESIDENT Muhammadu Buhari currently participating at the UK-Africa Investment Summit 2020, has raised certain issues on the sideline during his meeting with Prime Minister Borris Johnson in London.

The UK-Africa Investment Summit had kicked off its maiden session on January 20, to promote trade between the UK and Africa, investment in the region, including the creation of a new Africa Investors Board.

On the sideline of the summit, the president had highlighted certain issues, as well as accomplishments attained in the country.

Buhari highlighted the issue of security, stressing on the nation’s difficulty in the area of resettling displaced persons in Northeast, Nigeria. He said the situation was, however, being handled upfront.

He noted that Nigeria requires the cooperation of the National Crime Agency of the UK, especially in the investigation of fugitives from Nigeria finding accommodation in the European country.

The president also averred the Nigerian government’s efforts to disabuse the minds of the people on the true philosophy of Boko Haram.

Also highlighted was the issue of corruption. Buhari said the Nigerian government has been fierce in its fight against corruption, saying it has been slow and painstaking.

In the area of climate change, Buhari noted that Nigeria and other neighbouring African countries haveUK-Africa been affected, especially with the shrinkage of the Lake Chad to a minuscule of its original size.

Also, Buhari expressed the plans of the Nigerian government of enhancing the Nigeria education sector with more headway on the girl child education.

In agriculture, the president said the country is self-sufficient in rice and other grains production, having saved billions of naira in foreign exchange. He noted that such accomplishment has generated developments in other sectors of the economy.

On his part, Johnson assured that the British government would partner with Nigeria in the fight against corruption through the National Crime Agency.

He promised to cooperate with countries in the Africa regions in the inter-basin water transfer, which could solve the Lake Chad problem and enhance security in the sub-region.

The British Prime Minister, however, asked that the president ‘keep the national autonomy of his country intact, noting that in the future, Nigeria would not just be a continental but international power,’ Channels TV report.

Nneoma BENSON
Comments
We need your support to produce excellent journalism at all times.