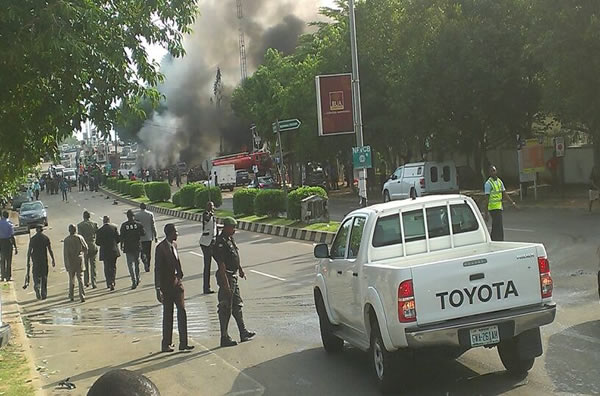 The police has said that 21 persons were killed in the explosion that rocked the Wuse 2 area of Abuja Wednesday.

Police spokesman, Frank Mba, who gave the figure, said 17 others were injured while 17 vehicles were burnt beyond recognition.

However, the police figures might be conservative estimates considering the physical damage in the area as well as the fact that the gate of the shopping mall where the bomb went of is usually crowded.

The gate is usually heavy with traffic as vehicles queue to enter the shopping complex. The entrance area also serves as a mini park for taxis which transport passengers to nearby Wuse Market. Also, at the gate at all times are street traders who sell fruits, clothes, phone accessories.

A few minutes after the attack when our reporter got to the scene, there were dead bodies on the street, some of them dismembered while more tuan 0 vehicles were burning.

One eye witness who got injured in the attack told our reporter that scores of persons might have died.