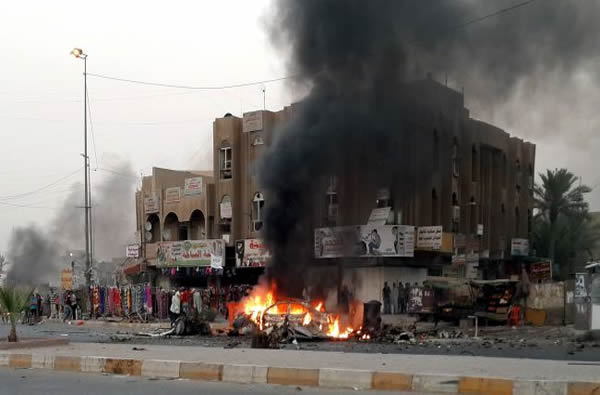 At least 30 people were killed in a double bombing in the northern Iraqi town of Tuz Khurmato on Monday, local officials and medical workers have said.

Reports say 185 people were wounded in the blasts, the force of which destroyed many buildings in the area and security sources said that more bodies were likely to be found beneath the debris.

It was gathered that a car bomb blew up at a checkpoint near the local headquarters of the Patriotic Union of Kurdistan, PUK, party just before a truck packed with explosives was detonated beside a wall.

There are suspicions that the Kurdish political party may have been targeted.

The attack is the latest in a show of strength by militants who have been regaining ground in Iraq.

They had on Sunday killed 18 people in twin blasts targeting PUK offices in the town of Jalawla.

The Sunni militant Islamic State in Iraq and the Levant (ISIL) said it was behind that attack and also claimed responsibility for the bombing on Monday.

Tuz Khurmato is around 170 km north of Baghdad and lies in the territory which both the federal government and the autonomous Kurdistan region claim as theirs.

Both are a target for Sunni Islamist insurgents who recently overran two major cities, occupied a university campus in western Iraq and set off a dozen car bombs in Baghdad.

Nearly 800 people were killed across the country in May alone, the highest monthly toll this year so far.

No Attack On Dikwa – LGA Chairman

What world leaders are saying about brewing tension between…