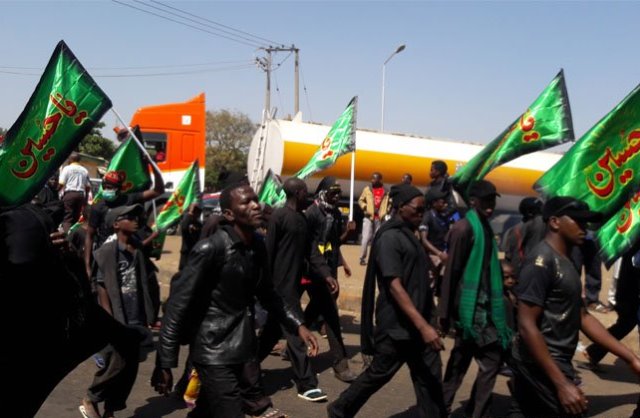 No fewer than 77 members of the Shiite Islamic sect were on Thursday dragged before different  Magistrate courts in Kano following clashes between members of the sect and irate youths in the city on Wednesday.

While 26 were arraigned before magistrate court 18, the remaining members of the group were taken to different magistrate courts , from 20- 28 for the hearing of their offences.

The offence they were charged with include illegal procession on the streets, breach of peace and among others.

However, the presiding judge of the Magistrate court , Muhammad Sanusi Idris granted all of them bail on the provision of surety and adjourned the case to a later date.

It will be recalled that pandemonium broke out in the ancient city of Kano on Wednesday, when hundreds  of youths attacked the Shiites during their procession to mark the tenth day of Muharram, that coincides with the first month of the Islamic calendar by all Muslims worldwide.

However, the prompt intervention of the police averted what could have been  a bloody clash between the angry youths and the Shiites.

According to our findings, the youths are reported to be inhabitants of Gwammaja Quarters.

It was gathered that trouble started when the Shi’ites in their thousands allegedly blocked major roads in the city in procession, despite the ban by the police.

An eye witness, one Muhammed Audu , said that as early as 7:30am, the Shiite members came from neighbouring states and converged at the popular Abattoir, situated at the center of the city.

It was also disclosed that as the group was preparing to proceed to the Fagge mosque, close to Fagge Police Station and the Local Government Secretariat, where they usually observe the Ashoura, they were confronted by irate youths who began hurling missiles on them.

It was further gathered that the anger of the residents was as a result of the Shi’ites blocking their business premises, apparently preventing them from carrying out their daily transactions.

However, the police intervened and restored relative order at the area.

During the clash which lasted for about two hours, traders hurriedly locked their shops to prevent miscreants from taking  advantage to loot their goods.

The Kano State Police Command spokesman, Magaji Majiya, confirmed the incident, adding that the command had anticipated that there would be trouble and had deployed personnel to strategic places as a proactive measure.

Ashoura is marked on the tenth day of Muharram, the first month of the Islamic calendar, by all Muslims.

It is a particularly important period of mourning for Shia Muslims, as it marks the anniversary of the 7th century Battle of Karbala in present day Iraq, when Imam Hussein, grandson of Prophet Muhammad, was killed.

The death of Imam Al-Hussein is considered by the Shia community as a symbol of humanity’s struggle against injustice, tyranny and oppression.

Nigeria not building a rail line into Niger Republic –…

FEC approves $1.9b rail line project from Kano to Niger…