... Nigeria's 50th independence anniversary celebrations, 10 years ago, is remembered for the first bomb blasts recorded in Abuja and the Federal Capital Territory was never the same again after. 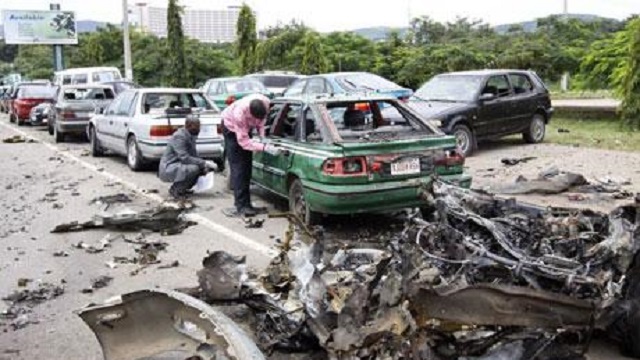 WHEN Information minister, Mr Lai Mohammed, ‎announced that all routes leading to the Eagle Square would be blocked from midnight on Wednesday, September 30, as part of measures to beef up security in and around the venue of Nigeria’s 60th independence anniversary celebrations on October 1, 2020, it was clear that Abuja, the country’s capital city, is still haunted by an incident that occurred during the same event, on the same date, exactly 10 years ago.

On October 1, 2010, Nigeria celebrated its 50th independence anniversary – the Golden Jubilee. ‎But the day is remembered for bomb blasts that occurred during the lavish celebrations.

There were three blasts from car bombs. It was the first time bomb blasts were recorded in the Federal Capital Territory. In fact, at that time, bomb blasts have not become a common occurrence in Nigeria, a situation which was to change with the ascendancy of the Boko Haram terrorists. ‎

At least twelve persons, including a policeman, died, while 17 others‎ sustained injuries, in the Independence Day bombing, which was claimed by, and blamed on, a Niger Delta militant group – the Movement for the Emancipation of the Niger Delta (MEND).

The first blast occurred around the Ministry of Justice, a stone throw from the Eagle Square, at 10:30 am,‎ and a second explosion went off moments later, after emergency services had arrived at the scene.

A third, smaller explosion occurred at the Eagle Square, where President ‎Goodluck Jonathan was observing the Golden Jubilee festivities with foreign dignitaries and hundreds of Nigerians, mostly government officials and prominent individuals.

Jonathan, who was inspecting a guard of honour at the time, had to leave the Eagle Square suddenly in an armoured limousine, without making a scheduled address. The celebrations however continued on a sober, tensed note, with military bands, dances by school children and air force displays.‎

As it were, the explosions occurred about an hour after MEND threatened to attack the celebrations, and warned people to evacuate the area.

“Several explosive devices have been successfully planted in and around the venue by our operatives working inside the government security services. In evacuating the area, keep a safe distance from vehicles and thrash bins,” a statement signed by MEND spokesman, Jomo Gbomo, said.

The militant group was fighting to secure a greater share of the oil revenue for the Niger Delta, the country’s oil rich area, and the statement noted‎ that “For 50 years, the people of the Niger Delta have had their land and resources stolen from them”.

Meanwhile, the Independence Day bomb blasts, and subsequent terror attacks in Abuja, including the August 26, 2011 bombing of the UN headquarters, by the Boko Haram sect, had a drastic impact on future celebrations of Nigeria’s Independence Day anniversaries. ‎

About a year later, on September 28, 2011, three days to the celebration of the country’s 51st independence anniversary scheduled for October 1, 2011, another statement came from MEND, again threatening to blow up the Eagle Square. “On October 1, 2011, the Movement for the Emancipation of the Niger Delta intends to place bombs within and in the immediate vicinity of Eagle Square, venue of the proposed 2011 independence anniversary celebrations. After fifty one years of independence, Nigerians still have nothing to celebrate. The general public is strongly advised to consider this as a first and final warning.

“No additional warning will be issued subsequent to the deployment or detonation of these devices which will be novel in nature,” the emailed statement by MEND spokesman, Jomo Gbomo, said.

As if that was not enough, a security report submitted by the Presidential Committee on Security Challenges in the North-East zone revealed that suspected Boko Haram members have sneaked into Abuja to carry out suicide bomb attack on a national asset in order to dent the 51st independence anniversary celebrations. ‎

Amid fears of possible deadly terror attacks in the FCT, the 51st independence anniversary celebrations was a low-key ‎ceremony which held inside the Presidential Villa, with massive security beef up across the nation’s capital.
‎
When, on September 3, 2012, ‎the then Minister of Interior, Abba Moro, announced that that year’s 52nd independence anniversary would again be a low-key event ‘in line with the transformation agenda of the administration which frowns at flamboyance and unnecessary spending’, many Abuja residents believed that the government was only looking for an excuse to, once again, stay away from the Eagle Square to avoid the terrors of another Independence Day bombing.

Gradually, holding the independence anniversary parade inside the heavily protected fortress that is Aso Rock, the Presidential Villa became the tradition.

In fact, it was not until ‎the country’s 58th independence anniversary in 2018 – eight years after the Independence Day bomb blasts of 2010 – that the celebration would be held again in the Eagle Square, as President Muhammadu Buhari inspected the guards parade in a highly secured ceremony.

But, when Nigeria marked its 59th independence anniversary, on October 1, 2019, the celebration was again moved to the Presidential Villa.

The most striking, and lasting, consequence of the terror attacks in Abuja – starting with the October 1, 2010 bombing and amplified by the deadly activities of the Boko Haram – was the officially sanctioned distortion of the highly revered Abuja Masterplan in the form of road diversions and erection of ‘security infrastructure’ around the premises of major national assets, including key government establishments, in the city.

Heavy concrete barriers were deployed at the entry points, and around the perimeter fences, of offices such as the Central Bank of Nigeria, Nigerian National Petroleum Corporation, Ministry of Foreign Affairs, Ministry of Defence, and several others. The same was replicated, with even more fortifications, at buildings housing security agencies, such as the Army headquarters, the National Defence College, the police headquarters, the Department of State Services, the National Security and Civil Defence Corps, among others. In fact most police stations, and indeed any government office that had a convenient space for the deployment of the concrete barriers, were all equipped with the security facility, which was meant to prevent bomb-laden vehicles from coming into the premises to wreak havoc.

The concrete barriers are still in place today, and in some of the offices, have been painted to look like decorative objects.

The need to paint and decorate the concrete barriers must have been informed by the fact that they defaced and distorted the environment, giving the premises of the concerned establishments a disorganised, crude and shambolic appearance.

Besides, in a bid to ensure that ‎potential terrorists do not get close enough, roads around some key establishments, particularly security outfits, were blocked, with vehicles and pedestrians forbidden from passing. In such situations, vehicular and pedestrian movement was restricted to just one lane on the opposite side of the road, as is the case on the road around the defence headquarters.

Also, military posts manned by heavily armed and highly alert operatives were set up around the entry points at some major government establishments. In most cases, combat ready armoured tanks are stationed at such military posts. Apparently, the government is not taking chances.

From all indications, ‎the concrete barriers, road diversions and security fortifications have come to stay, and might as well have become part of the Abuja masterplan.

Despite the ‘targeted‎’ security fortifications in parts of the city, some residents of Abuja are still not feeling secure.

A civil servant, Mr Malachy Ibeji, works in the protocol unit of a government agency and was on official duty at the Eagle Square on the day of the Independence Day bomb blasts. In an encounter with our correspondent, he said he has been avoiding large, public gatherings since that incident. ‎”I was on duty at the Eagle Square on that day and because of that experience I always try to avoid large public gatherings. You never can tell what some people are planning and when and where an attack will take place. There are so many issues in the country and a lot of people are aggrieved because of one thing or the other so you can’t rule out another bomb blast especially when there is a large crowd,” he said.

A cab driver, ‎who identified himself as Aniete James, noted that Abuja is not safe. He recalled hearing the breaking news of the Independence Day bombing through his car stereo, just moments after the blasts went off. “At first I thought the news was about something that happened in Baghdad, Iraq, or any other place in the Middle East where bomb blasts are a normal thing. But I realised it was Abuja and I was terrified. I had to stop work immediately for a couple of hours to observe how things were going,” James said. ‎Ten years after, James said he is still conscious of the dangers that residents of the FCT face while going about their daily activities.  ‎

“Abuja is the federal capital so any group that wants to strike the government will launch an attack in Abuja,” he observed.

Janet Ekechukwu, a trader, said she just had her first child around the period the bomb blasts occurred and tried very hard to get her husband to relocate the family to the eastern part of the country.

She said, “It was a fearful period, I was telling my husband that we should leave Abuja and move down to the east. We are from Imo State and I wanted to relocate to Owerri or Enugu, which I still believe are ‎more peaceful and secure than Abuja. My husband refused because of his work but I was afraid for my baby. Even my mother and my husband’s parents wanted us to leave Abuja. Now I have three kids and I still want to relocate because Abuja is not safe.”

A third person accused of masterminding the attack – Tiemkemfa Francis-Osvwo – died in detention.

Okah, Nwabueze, Ebiware and Francis-Osvwo were first arraigned before an Abuja Federal High Court on December 7, 2010, after they were arrested for their alleged role in the bomb blasts.

At the time the accused persons were arrested, the spokesperson of the Department of State Services, Marilyn Ogar, said they had direct links with a former leader of MEND, Henry Okah, who was in South Africa, as well as some “unscrupulous prominent elements in the society”.

Henry Okah‎, the elder brother of Charles Okah, was arrested in Johannesburg, where he reportedly has a house, a day after the Independence Day bomb blasts in Abuja.
‎
All the accused persons denied the charges filed against them by the Federal Government, through the DSS, which investigated the matter.

Ebiware, who had his trial conducted separately, was convicted in 2013 and sentenced to life imprisonment. Charles Okah and Obi Nwabueze were similarly convicted and handed life jail sentences in 2018. Henry Okah has also been prosecuted and reportedly convicted‎ in South Africa for the bomb attack.