Abuja Airport Reopens A Day Ahead Of Schedule 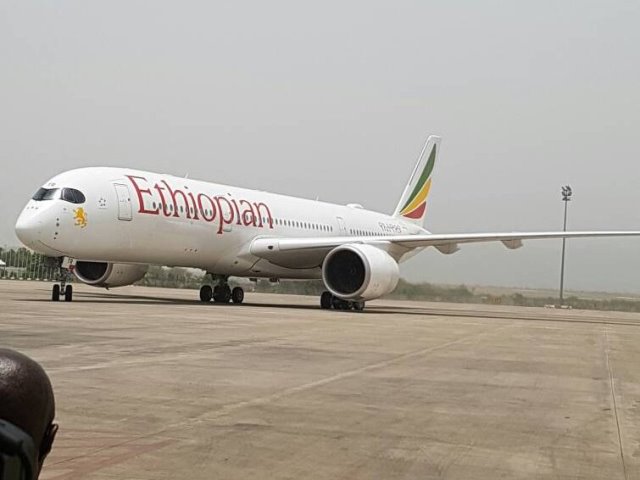 The Nnamdi Azikiwe International airport, Abuja, has reopened, a day ahead of the scheduled reopening date of April 19.

The airport was shutdown on March 8 to enable the government carry outtotal rehabilitation of its runway.

Minister of state for aviation, Hadi Sirika, was reportedly on board the plane.

Earlier, the News Agency of Nigeria, NAN, had reported that an Ethiopian Airline flight will be the first aircraft to land at the airport on Tuesday.

The Airlines’ traffic and sales manager, Firiehiwot Mekonnen, was quoted in the report as saying that its 313-passenger-capacity Airbus A350-900 will land at the Abuja airport at 11:15 am on Tuesday.

She said the decision to celebrate the inaugural flight to Abuja was to demonstrate the airline’s commitment to the Nigerian market.

“The Ethiopian’s brand new Airbus A350-900 is landing in Abuja airport on Tuesday as the first aircraft to land on the newly rehabilitated runway and first airbus to land in Abuja (and) from now on, we are going to operate Airbus on Abuja route,” she said.

Recall that Ethiopian Airlines is the first and only international operator to land its aircraft in the Kaduna international airport after Abuja-bound flights were diverted to Kaduna as a result of the airport closure.

It maintained consistent operation at the Kaduna airport throughout the six weeks that the Abuja airport closure lasted.

Governor Nasir el-Rufai of Kaduna state, had also requested that Ethiopian airlines maintained its Kaduna operation even after the reopening of Abuja airport, a request the airlines spokesperson said was being seriously considered.

Aviation Minister, Sirika had a hard time convincing stakeholders about the necessity of closing down the Abuja airport and diverting flights to Kaduna.

He had maintained that shutting the airport down was the best option of all the choices presented by various stakeholders, including the option to carry out the works at night while flight operations continued during the day.

Prime Minister May Call For UK General Election In June