‘All warehouses along land borders must be dismantled’, FG gives conditions for reopening border


FOLLOWING the closure of Nigeria’s land borders to all movement of goods till January 2020, the Federal Government has listed four rules/conditions for the re-opening of goods importation from neighbouring countries.

The comptroller-general of the Nigerian Customs Service, Hameed Ali while addressing newsmen last month said the ban from being exported or imported of goods through the land borders is to ensure total control over what comes into the country.

After closing Nigeria’s borders to imported goods in August, President Muhammadu Buhari said the time has come to end rampant smuggling across our porous frontiers.

Buhari’s administration which initiated an anti-corruption strategy campaign aimed at creating reforms that would facilitate a corruption-free society and an economic boost, listed conditions for reopening of the border through Minister of Foreign Affairs, Geoffrey Onyeama in the Inter-Ministerial Committee on the Temporary Partial Closure of Land Borders meeting in Abuja on Monday.

One of the conditions reported by Punchng, the Federal Government said Nigeria would not accept imported goods that were repackaged by neigbouring countries and brought to Nigeria.

Looking at the situation, Onyeama said the Nigeria committee has agreed on a set of conditions. These conditions are as follows:

“That it is an absolute requirement of the government of Nigeria that any import coming through our land borders, when those imports transit in goods, that is to say when they are coming from outside the ECOWAS region and imported into an ECOWAS member state, that those goods should retain their original packaging.

“There should be no modification whatsoever to the packaging of those goods imported into an ECOWAS member state destined for Nigeria.” 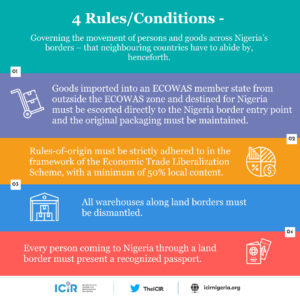 He added, “They (goods) must be escorted from the port directly to the designated entry point in Nigeria border, so presented to Nigeria customs with the packaging intact and those goods escorted.

“This is an absolute condition that will not be compromised; So any transit in goods coming into this country from transiting ECOWAS member state must ensure that.

“For goods predominantly produced in ECOWAS member states, the rules of origin must be satisfied.”

The Chairman of the All Farmers Association of Nigeria, Mr. Femi Oke, Lagos chapter, commended the Federal Government on the continuous closure of land borders.

NAN reports that the closure according to Oke had motivated farmers to carry out more production to meet the increasing demands, describing it as a good development.

The Governor of the Central Bank of Nigeria, Mr. Godwin Emefiele, said the closure of the nation’s borders is a great step that will improve the state of security.

While delivering a lecture on Friday at Edo State University, Iyamho in Edo State, he explained that most of the arms being brought into the country were smuggled in through the borders.

But ever since the borders were shut, the development has yielded good results.

Ghana’s Minister of Information Oppong Nkrumah on Monday said ECOWAS must swiftly engage Nigeria on the issue of the border closure.

A Ghanaian newspaper (Ghanaweb) reported that the minister in an interview with journalists lamented that the border closure was affecting Ghanaian traders and called on the Economic Community of West African States, (ECOWAS), to engage Nigeria on the issue.

He described the situation as “a terrible one” saying a delegation has been dispatched to visit the Ghanaian traders who have had their goods locked up at the borders after Nigeria made the decision on August 21 to shut its borders.

The closure has had a devastating effect on Benin, Nigeria’s neighbour to the west, which has been a key exporter of foodstuffs to Africa’s most populous country.

It has also pushed up prices for staples such as rice at markets around Nigeria.