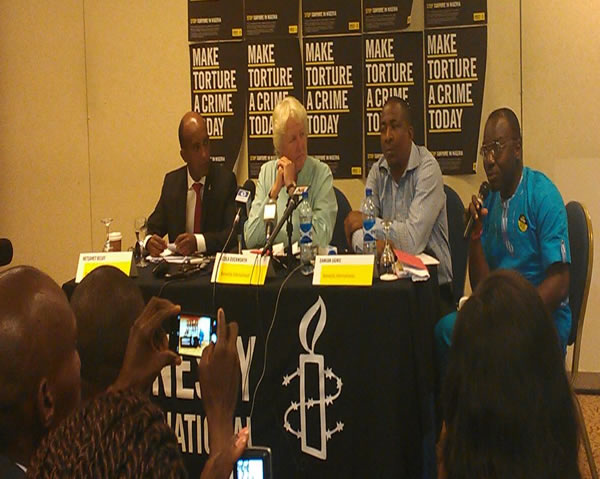 Amnesty International, the global human rights watchdog group, has alleged that police and military personnel torture suspects in detention to extract confessions and urged the federal government to immediately criminalise such acts, end detention in solitary confinement and fully investigate allegations of abuses by security agencies.

The research and advocacy director for the group, Natsanet Belay, made the call on Thursday in Abuja at the launch of its latest Amnesty International report titled, ”Welcome To Hell Fire” which chronicles the experiences of several victims who said they were tortured in detention and were lucky to have come out alive.

She also said that to discourage the torture of suspects which is common in most police stations, the Nigerian government had to demonstrate total opposition and publicly condemn such practices

Belay said that Amnesty International was working with the National Human Rights Commission, NHRC, to ensure that steps are taken to formulate a law that would criminalise torture and other forms of inhuman treatment by security personnel.

According to the report, those interviewed by the organization ranged from 12 to 60 years of age, many of who were arrested in large dragnet operations and forced to confess to crimes such as armed robbery or murder which they never committed with the assurance that it would help hasten their release from detention.

However, it is alleged that soon after such suspects consent to this plan, they discovered they had been deceived.
The report also alleged that children (those under the age of 18) were forced to jerk up their ages to justify their unlawful detention.

They are then transferred from the torture chambers which usually has inscribed on its wall the phrase “Welcome To Hell Fire” (depicting what kind of treatment one should expect if he/she fails to cooperate), to a detention cell, while the process for their arraignment in court is commenced.

According to the report, methods of torture vary from sexual assault, nail and teeth extraction, water torture, choking, electric shock, mock execution, shooting in the leg and hands, denial of access to legal representation and family members.

“This goes far beyond the appalling torture and killing of suspected Boko Haram members. Across the country, the scope and severity of torture inflicted on Nigeria’s women, men, and children by the authorities supposed to protect them is shocking to even the most hardened human rights observer,” said Belay.

One of the victims, who was at the press conference, Justice Onyeka, relived his experienced in the hands of the Police at the Special Anti-Robbery Squad, SARS, in Ontisha, Anambra State, from August 1, 2013 – October 17, 2013.

Onyeka, said he was the manager of a hotel in Onitsha and was at his duty post on August 1, 2013, when armed men of the Nigerian Police Force stormed the premises and rounded him, a receptionist, a cleaner and 10 other staff of the hotel up and demanded to be shown to room 102. The key to the room was unavailable because the guest who had lodged there had gone out with it as early as 7am; the room was however, forced open.

He said that as they were led by the Police into the room, there was a suitcase on the bed and after a search was conducted around the room, two decayed human heads were discovered in the wardrob. Onyeka said neither he nor the other arrested colleagues could explain how the heads got to the hotel and that it marked what later became their long journey to Hell.

In the torture room at SARS, he was asked to write down his statement. He started but the sheet of paper on which he wrote was soon snatched away and in its place, a blank sheet was handed to him to sign at the tail end. The sheet was given to him blank to enable the police fill in whatever crime they wanted to pin him down with. He initially resisted, but when the bags of cement mounted on his back as he lay of the floor began the rise, he couldn’t stand his position much longer. He needed to be alive to tell his story if ever he thought he would have the chance to.

After he gave in to the pressure, Onyeka said he was taken to a dark room filled with other inmates, where he lived in misery for a period of over two months. There was no food. Occasionally, the cell guards would throw in a few loaves of bread and sachets of water which had to be shared according to seniority, as he soon realized there was hierarchy even in the cell. The food never got around the over 30 inmates in his cell.

How he managed to come out alive from that dungeon is what he says is a miracle. His lawyers were eventually able to secure bail for him from a high court and he was allowed to see his parents for the first time since his detention a day before he was released.

Torture has become such an integral part of policing in Nigeria that many police stations have an informal “Officer in Charge of Torture” or O/C Torture as they are usually called. They use an alarming array of techniques to extract confessions from suspects.

In most of the torture allegations against security forces documented by Amnesty International, no proper investigations were carried out and no measures were taken to bring suspected perpetrators to justice.

This will not be the first time that the organization is making these allegations against the police and military, but at all times security forces have denied them, yet promising to carry out its investigations. Results of such investigations are often never made public.