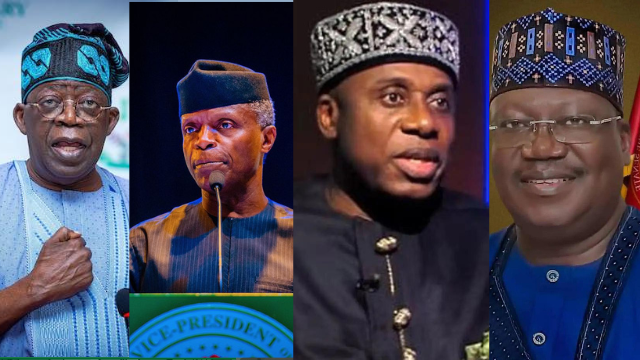 Tinubu did not blame Buhari in comments on naira redesign, fuel scarcity — APC

ON the day of the All Progressives Congress (APC) presidential primary election, the race for the ticket has narrowed to a straight contest between four leading aspirants – Vice President Yemi Osinbajo, former governor of Lagos State Bola Tinubu, former minister of transportation Rotimi Amaechi and Senate President Ahmad Lawan.

Osinbajo as Vice President should be counting on President Muhammadu Buhari’s support and the added advantage of the incumbency factor. But after informing Nigerians that he has a preferred candidate whose identity he said he was keeping secret, and later asking APC governors to support him to choose his successor, Buhari on the eve of the primary election declared that he has no candidate.

But Osinbajo is among the aspirants that are most favoured to pick the APC ticket. There are suspicions that Buhari will want the VP to succeed him to carry on with the programs of his administration and should that be the case, an unpublicized endorsement and support from the President can go a long way in turning the outcome in Osinbajo’s favour.

However, Osinbajo will likely share South-West votes with Tinubu and Fayemi, a development which may erode his zonal advantages.

Ken Nnamani pulls out of race for APC presidential ticket

Tinubu, referred to as the national leader of the APC, has always been the man to beat when it comes to the race for the party’s presidential ticket for the 2023 general elections. In addition to his strong political structure, Tinubu also has the added advantage of being the beneficiary of a widely reported agreement whereby Buhari agreed to hand over to him (Tinubu) at the end of his (Buhari’s) tenure. Going by the account of the Tinubu camp, the agreement was, more or less, the basis for Tinubu’s support for Buhari’s election as President in 2015.

Tinubu visited Buhari at the Presidential Villa before officially declaring his intention to contest the 2023 presidential election. The visit was to seek Buhari’s support, and, thereby activate the controversial agreement between the two men.

So far Buhari has not openly supported Tinubu’s ambition, and the President’s body language does not indicate that Tinubu is his preferred candidate. Tinubu’s recent outburst, while addressing APC delegates in Ogun State, is seen as an angry reaction to the failure to get the President to back his ambition.

Tinubu declared that Buhari would not have become President without his support, and went ahead to make it clear that he expects Buhari to reciprocate by handing the presidency to him.

The APC national chairman Abdullahi Adamu, a Buhari loyalist, has hinted that the party may sanction the former Lagos governor for his utterances and the presidency came out to counter Tinubu’s claims on the eve of the national convention by declaring that no single person should claim the glory of Buhari’s victory in 2015.

In the statement released to counter Tinubu’s claims, Senior Special Assistant to the President on Media and Publicity Garba Shehu, obviously speaking for Buhari, noted that the manner of Buhari’s emergence in 2015 was not relevant to the 2023 general election.

“What matters is the future: the policy platforms, the ideas, the drive, and the determination to take over the President’s stewardship of our country and build upon his legacy to make our country better than it has ever been. The person most demonstrable in those qualities is the one to lead our party and our country forward,” the presidential aide added in the statement, further suggesting that the presidency does not see Tinubu as Buhari’s ideal successor.

But, in a primary election where aspirants are given a level playing field, as promised by Buhari, Tinubu should fancy his chances.

Amaechi lacks the incumbency factor which favours Osinbajo, and the strong political structure which is Tinubu’s major advantage. But the Rivers State governor is a dogged fighter who has paid his dues in the APC. He is also one of a small circle of APC politicians who are regarded as Buhari’s possible preferred successors.

Amaechi is very close to Buhari, having led the President’s election campaigns in 2015 and 2019.

In addition, the former Speaker of the Rivers State House of Assembly has strong connections in the North, where he is widely accepted as demonstrated by his recent title as Dan Amanar Daura (trusted son of Daura) by the Emir of Daura, Umar Farouk.

Although a controversial move by APC national chairman Adamu to declare him as the consensus candidate was foiled on June 6, Senate President Ahmed Lawan remains a formidable force in the race for the party’s presidential ticket.

The fact that Lawan is the only major aspirant from the North is enough advantage on its own, going by the region’s penchant to vote in a bloc, and according to ‘Northern interests’. The Northern APC governors may have backed power shift to the South, but the Senate President remains in race for APC presidential ticket.

Minutes before Buhari’s meeting with the presidential aspirants on June 4, APC governors from the North issued a joint statement backing the power shift to the South. The Northern APC governors said in the statement that after Buhari’s eight years, a Southerner should become Nigeria’s President.

To emphasise the position of the Northern governors, who had before now opposed their Southern counterparts’ call for power shift to the South, Jigawa State Governor Abubakar Badaru – the only sitting Northern governor in the presidential race – withdrew from the contest.

Southern groups and stakeholders, including the Southern Governors Forum, have hailed the gesture by the Northern governors.

But Senate President Ahmed Lawan – regarded as one of the leading aspirants – is still in the race.

Lawan emerged as one of the leading aspirants for the APC presidential ticket after former Vice President Atiku Abubakar was elected the flagbearer of the opposition Peoples Democratic Party (PDP). Lawan, from Yobe State, is from the North-East, like Atiku and many party stakeholders believe he should get the APC ticket to counter regional advantages Atiku’s candidacy would give the PDP in the North, which has a large voting population.

Also, despite the APC Northern governors’ endorsement of power shift to the South, the North-East as a geopolitical zone is arguing that it should be given the opportunity to produce the President, having not had the privilege since Nigeria returned to democratic governance in 1999.

Lawan’s endorsement by APC national chairman Adamu could also be an indicator of where Buhari’s interests lie. Adamu is Buhari’s man and he reportedly said he arrived at the decision to name Lawan consensus candidate with the President’s permission. Despite Buhari’s declaration that he has no candidate, Adamu’s action may suggest otherwise.

The Senate President’s president in the presidential race may negate the effect of the Northern governors’ decision to support the power shift to the South.

Just like Tinubu, a level playing field in the APC presidential primary will also favour Lawan.

Northern votes will be decisive

With most of the leading aspirants coming from the South, Northern delegates, and by extension, Northern votes, will be decisive in the outcome of the APC presidential primary.

The Northern votes are a factor that can work in the favour of Senate President Ahmed Lawan – unless the Northern APC governors are able to get their delegates to refrain from voting for the Yobe State politician.

Northern votes decided the PDP presidential primary in favour of Atiku Abubakar. A similar outcome is not unlikely in the APC primary election.

The new Electoral Act 2022 did not allow voting by statutory delegates in political party primary elections. An amendment passed by the National Assembly, aimed at reversing the situation, has not been signed into law by the President.

As a result, public officials such as the President, Vice President, members of the National Assembly, governors and their deputies, members of the state houses of assembly, chairmen of councils, councillors, and members of the national working committee, amongst others, who are regarded as statutory delegates in political parties, would not vote in the presidential primary election.

The non-participation of statutory delegates may affect the electoral fortune of some aspirants, particularly those who ordinarily should be banking on ‘jumbo delegates’ – a term that refers to a situation where a state has a huge number of delegates due to the presence of a large number of public officials.

North-West has largest number of delegates at APC presidential primary

A breakdown of the number of delegates that would represent the various states and the FCT in the APC presidential primary election shows that the North-West has the highest number with a total of 558 delegates.

The South-East, with 288, has the lowest number of delegates that will be voting in the APC presidential primary election.

Breakdown of the delegates by states and zones