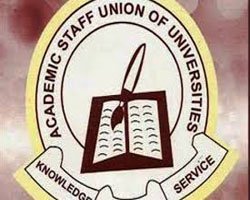 THE Academic Staff Union of Universities (ASUU) has declared an indefinite strike effective from August 29.

The strike follows over six months shutdown of the nation’s public universities by the union over unmet demands by the Federal Government.

ASUU embarked on strike on February 14 after the government failed to implement a 2009 agreement and other demands with the lecturers.

On Monday night, the union accused the government of deceit and unwillingness to make the country’s public universities work in a statement signed by its President Emmanuel Osodeke.

The ICIR reports ASUU as saying the government offered its members between N30, 000 and N60,000 monthly salaries, among other unacceptable offers.

The union claimed the government was yet to endorse the University Transparency and Accountability Solution (UTAS) it demanded to replace the Integrated Personnel and Payroll Information System (IPPIS).

According to the group, the government has not implemented the white papers on visitation panels to federal universities.

ASUU accused the government of not releasing the balance of one tranche of the universities revitalization fund more than one year after, including releasing the outstanding two tranches of the earned academic allowances (EAA).

It also said the government was yet to take action on the amendment of the National Universities Commission (NUC) law to stem the tide of the proliferation of universities, especially by the state governments.

The union said in the statement that its National Executive Council (NEC) agreed at the weekend in Abuja that it “had experienced a lot of deceit of the highest level in the last five and half years as the federal government engaged ASUU in fruitless and unending negotiation without a display of utmost fidelity.

“In 2017, the Federal Government constituted a committee to renegotiate the 2009 FGN-ASUU agreement under the chairmanship of Dr Wale Babalakin. After three years of fruitless negotiation, Dr Babalakin was replaced in December 2020 with Professor Emeritus Munzali Jibril. The Renegotiation Committee produced and submitted a draft agreement to the Federal Government in May 2021.

” It is sad that, until February 14, 2022, when the ongoing strike commenced, the Federal Government made no significant efforts to either sign the agreement or commence implementation. It was only after the commencement of this strike that the Federal Government reconstituted the committee with Professor Emeritus Nimi Briggs appointed Chairman to lead the Government Team.”

After intensive bargaining, ASUU said it came to a compromise with the Briggs-led team, leading to the submission of the second draft agreement to the Federal Government in June 2022 for consideration and approval for signing by the two parties within one week.

“NEC was utterly disappointed in agents of the government, especially the Minister of Education, for the deliberate falsehood and misrepresentation of facts aimed at scoring cheap political gains. It is disheartening to imagine that a minister whose responsibility it is to resolve the crisis can overnight turn round to lead in this ignoble enterprise of distorting facts and misleading Nigerians.

“The disdain with which the Minister of Education handled questions about the ongoing ASUU strike at his distasteful press conference on Thursday, August 18, 2022, lends credence to the widespread suspicion that the current government never believed in saving public universities from the misfortunes that have befallen Nigeria’s public primary and secondary schools,” ASUU explained further.

The union also condemned the reopening of some state universities by their vice-chancellors.

While lampooning the school heads, ASUU said its decades of struggles had increased sources of funding and training opportunities for the universities, including the setting of the Tertiary Education Trust Fund (TETFund).

It vowed to protect its members participating in the strike against victimization.

While sympathizing with students and their parents, the union emphasized that the strike was in the nation’s best interest.

The ICIR reports that efforts by the Federal Government to end the strike have failed.

While the government claimed ASUU’s withheld six months salary backlog stalled negotiation, ASUU argued that the government had not satisfactorily met any of its demands.

But Osodeke dismissed the claims last Thursday and called state universities backing out of the strike quacks.