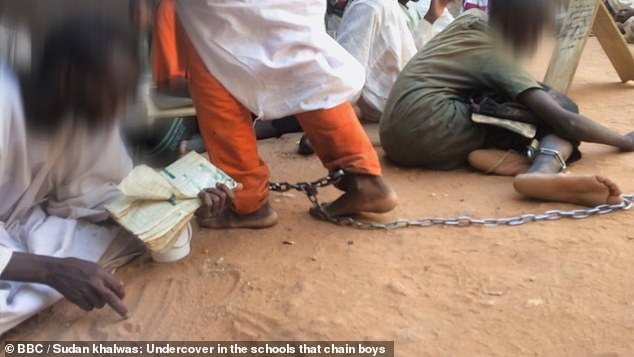 AN undercover investigation by the British Broadcasting Corporation (BBC), has revealed that thousands of boys have been kept under chains and serious torture and abuse in Islamic schools across Sudan.

Marina Forsythe, BBC World Service Group Communications, in a statement to The ICIR, said the investigation which was titled, “The Schools that Chain Boys”, has found that boys as young as five-years-old are routinely chained, shackled and beaten by the “sheikhs”, or religious men in charge of the schools, which number nearly 30,000 in the country.

The investigation also found evidence of sexual abuse of the boys.

She noted that the 18 months investigation was carried out by Fateh al-Rahman al-Hamdani,  its undercover reporter, who used to study at a khalwa himself and secretly filmed inside 23 khalwas across Sudan. The reporter found boys shackled and chained and witnessed brutal routine beatings.

The statement added that many of the children were malnourished and living in squalid conditions, forced to sleep on the floor in extreme heat. Sick children were left without medical help.

At the heart of the BBC investigation, Forsythe said are two boys; Mohamed Nader and Ismail – who were beaten so badly they nearly died. The boys were imprisoned and tortured for five days in their khalwa without food or water and had tar rubbed into their wounds.

A few months into his recovery, Mohamed Nader told BBC the reporter that he witnessed boys being raped inside the khalwa by older students.

“The worst thing about the khalwa is the rape. They make you go against your will,” he said

BBC said when it confronted the sheikh in charge of the boys’ khalwa, he admitted that it was wrong to imprison the children but maintained that beating and shackling were “packed with benefits” and that “most khalwas use chaining, not just me.” When asked about allegations of sexual abuse he categorically denied these claims and accused our reporter of attacking the Koran. The sheikh died in a car accident earlier this year.

The film follows the boys’ recoveries and their families’ fight for justice as they take on the sheikhs who wield huge power and influence in Sudan.

Mohamed Nader’s mother, Fatima, hopes that since the 2018 revolution and the ousting of Omar al Bashir’s Islamist government, they stand a better chance of holding those in charge of the khalwas accountable.

During the course of the investigation, the BBC came across further reports of rape and sexual abuse in other khalwas. A forensic doctor, who examined three boys that recently escaped from one of Sudan’s many khalwas, told the BBC that boys were repeatedly raped: “I asked them ‘“How were you raped?” They said, “Sometimes our families visit us, they rape us just before they arrive.”

The investigation reveals that it’s not only children who are being abused. In a khalwa in central Sudan, the BBC filmed grown men chained to their beds, supposedly being treated for mental illness and addiction. One man told our undercover reporter, “They chain you up and beat you with a stick like a donkey… we are their slaves.”

In Sudan state prosecutors are obliged to take on all cases of crimes against children but when they take place inside khalwas the authorities are slow to act. When asked whether the beating, shackling and torture of children inside khalwas are considered a violation of children’s rights, a Public Prosecutor in Omdurman, Batool Sharif Ahmed, told the BBC “This is just normal practice inside khalwas. These children are sent to the khalwa with the consent of their parents.”

In the case of Mohamed Nader and Ismail the police arrested the sheikh in charge of the school and three other teachers. They were charged with assault and perverting the course of justice and released on bail. The khalwa remains open and the new sheikh in charge told the BBC that under his management the beating of children would not be tolerated.

At the time of publication, thousands of children are still at risk of being abused inside khalwas. The Minister of Religious Affairs told BBC News Arabic that they are assessing the state of khalwas across the country but that it is impossible to “solve a problem caused by 30 years of the old regime overnight.”

You can watch the full documentary of the investigation here.

Reports of torture inside khalwas are not limited to Sudan. In recent years, there have been reports about abuse of boys at religious schools in Nigeria, Senegal and Pakistan.

Of cancers and media reportage