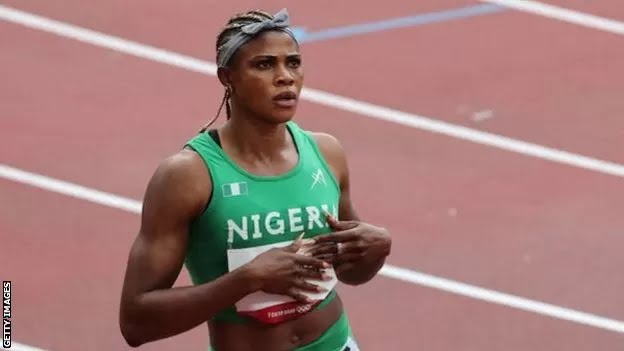 NIGERIAN Sprinter Blessing Okagbare has been banned by the Athletics Integrity Unit (AIU) for 10 years for engaging in multiple breaches of anti-doping rules.

Okagbare was initially suspended for testing positive to a banned substance on the eve of the Women’s 100m semi-final race at the 2020 Tokyo Olympic Games.

In a statement released on Friday, the AIU said that the 33-year-old athlete’s use of multiple prohibited substances was part of an organised doping regimen in the lead-up to the games.

The AIU said Okagbare was banned five years for testing positive for banned substances and an additional five years for refusing to cooperate with the investigation into her case.

AIU Head Brett Clothier said the ban was “a strong message against attempts to cheat”.

She was a medal contender for the women’s 100m race in Tokyo last year and won her heat in 11.05 seconds.

But she was ruled out of the semi-finals after the AIU said she had tested positive for a human growth hormone following an out-of-competition test on July 19, 2021.

In October, Okagbare was charged with three anti-doping offenses, which she denied.

Okagbare has 30 days to appeal against the AIU’s disciplinary tribunal’s decision at the Court of Arbitration for Sport (CAS).