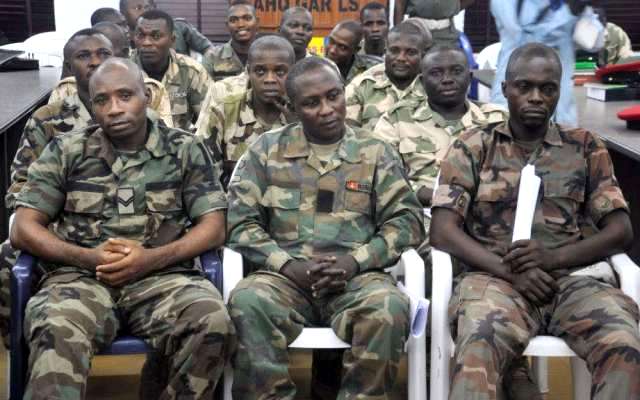 Soldiers serving jail terms at the Kirikiri Medium and Maximum Security Prisons have cried out to President Muhammadu Buhari to forgive them whatever wrongdoing they had committed and grant them pardon for the sake of their families.

The soldiers are those sentenced to death by a military court martial in 2014 for demanding weapons before going to confront Boko Haram terrorists, but whose cases were later reviewed and commuted to 10 years imprisonment by the Chief of Army Staff..

ICIR met the soldiers during an undercover visit to the prisons last week and interviewed them on how they’re faring and the conditions in the prisons.

The soldiers revealed that some Boko Haram suspects brought into the prisons had all regained freedom while they have continued languishing in jail.

A corporal, who acted as their spokesman, said: “The people we risked our lives fighting in Sambisa Forest who were brought here are being released one by one while we remain in jail. This is traumatic for all of us and we are begging our commander-in-chief to grant us pardon for the sake of God and our families.”

The soldiers also disclosed that the military authorities had stopped their salaries and their families had become impoverished.

“Most of us are the breadwinners of our families but we are in jail and our families have no one to take care of them. Our children have dropped out of school and we can’t help them,” said another soldier, as the others all nodded their heads in agreement.

They pointed at a soldier whose daughter was to write WAEC this year but had to drop out of school for lack of money.

But even life in the prison has been hectic and traumatic. The soldiers all complained about the exploitation by prison officials from the security men to the top.

They alleged that food ration in the prison was pathetic and that any prisoner who wanted to eat decent food had to prepare his own food or request his family to bring food to the prison.

“Prison officials request money from people who bring us food right from the gate to inside the prison. Sometimes a visitor who brings food pays as much as N3,000 each time they bring food into the prison otherwise they would not be allowed in. For God’s sake, how can we cope with this?” a soldier asked with anger on his face.

But corruption in the prison does not end there. According to the soldiers, prison officials sell food stuffs and soup ingredients provided by government and NGOs to prisoners. The soldiers pointed at a store behind the prison entrance gate where the reporter saw onions, salt, yams and other food items being packaged.

“They will parcel the food stuffs from the store and give to the prison traders who help them sell to us,” the soldiers alleged.

When the ICIR confronted the prison officials with these allegations, they denied all. Abdulrasheed Ogundare, the prison Welfare Officer who thought he was speaking to a human rights lawyer, denied all the allegations.

On the release of Boko Haram suspects from the prison, he said there was nothing like that. “Those that were released were suspects raided from Lagos and brought to the prison, not the Boko Haram from Sambisa. Those ones are still in our custody. We don’t even allow them go out like the other prisoners.”

He called a prisoner to confirm whether Boko Haram suspects in the prison were being released, but the prisoner neither confirmed nor denied. “I don’t know; I’m not sure,” he responded, squeezing his face and walking away.

“Don’t mind the soldiers, we didn’t release any Boko Haram,” the Welfare Officer repeated to the reporter.

On prisoners’ feeding he said they were well-fed and that the caterers were graduates of catering. “If you’re in prison you cannot expect to feed as if you’re at home,” he said in response to allegation of poor meals. He however said most of the prisoners were “self-feeders”, meaning they arranged their own feeding.

Sani Usman, a Brigadier General and Director of Army Public Relations, refused to be drawn into any discussion on the issue, saying the case was of the soldiers was still in court.

“You’re aware that Femi Falana is in court over the case of the soldiers, so why do you want me to comment on a case that is in court?” he asked.

Femi Falana, Senior Advocate of Nigeria (SAN), appealed the jail terms given to the soldiers by the Chief of Army Staff.

He said although the soldiers were charged with mutiny, “the only allegation proven against them at the courts-martial was that they protested the refusal of the military authorities to provide weapons to fight insurgency”.

Falana, as well as many other Nigerians, called on President Muhammadu Buhari to grant pardon to soldiers in view of the circumstances under which they committed the alleged infractions.

They also argued that unlike many soldiers who deserted the army, the convicts were ready to defend the territorial integrity of the country, but had only made a legitimate demand for equipment to fight the insurgents who were better equipped and motivated.

Rebecca Akinremi
Comments
We need your support to produce excellent journalism at all times.

Over 600 deaths recorded in North-East within six months,…

Slain Borno farmers had no clearance to resume activities in…