says Government seem completely insensitive to the plight of Nigerians 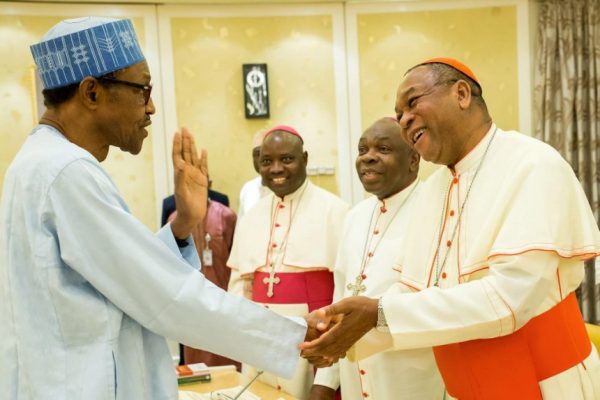 AUGUSTINE Obiora Akubueze, president of the Catholic Bishops Conference of Nigeria (CBCN) said the Nigerian President, Muhammadu Buhari rarely visits or speaks to Nigerians when attacked compared to his response to attacks in western countries.

“Nigerian Federal Government will not even send a condolence message to families who have suffered fatalities in the hands of Boko haram. We see our President rarely visit or even speak to Nigerians when there are terrorist attacks in Nigeria,” he said.

Akubueze said this during his remarks at a peaceful protest on Sunday organised by the CBCN in Abuja against the high level of insecurity in Nigeria.

According to him, the government sends condolence messages to foreign countries when there are attacks that led to the death of a few persons but fails to replicate the gesture internally.

He said the protest was carried out on behalf of over 22 million Catholic and over 100 million Christians living in Nigeria who stand against Boko Haram, kidnapping, herdsmen attacks.

It noteworthy though that these figures have not been validated by any census.

Akubueze noted that Christians are tired of claims by the Federal government that Boko Haram members have been “technically defeated”, despite incessant attacks.

He charged Buhari to take affirmative actions to prevent attacks in Nigeria, most especially in the northern part of the country.

The Archbishop urged the Nigerian president to listen to the legislative arm when they unanimously call for the sack of security chiefs of the nation and dissociate himself from members of his government that politicize the killings of Nigerians.

Uzodinma says Ihedioha relative visited him, insists he did not install an Emir in Imo

How Nigerians reacted to $1.9b Kano-Niger Republic rail line project approved by…

Buhari says CAMA will help fight corruption, no, it contains…