TWO videos tweeted by one of the first-class traditional rulers in Nigeria claimed that a combination of African herbs, roots and leaves was the ‘solution’ to the novel coronavirus (COVID-19) that has baffled the world for over 18 months.

The videos titled: ‘Corona virus solution – Potent Yoruba herbs to help,’ with a combined playback of three minutes, 53 seconds, were posted on social media on March 30, 2020 by a Twitter user, @OoniAdimulaIfe.

When this reporter checked the profile of the user, it revealed that it was the official Twitter handle of ‘His Majesty Alayeluwa Arole Oodua Olofin Adimula, Ọ̀ọni Adeyẹ́yẹ̀ Ẹnitan Bàbátunde Ògúnwusi Ọjàjà II, Ooni of Ife.’

The Ọọ̀ni of Ife, according to a BBC report, is one of the most influential among the Yoruba people, Nigeria’s second-biggest ethnic group, estimated at about 35 million people in West Africa. He’s also the co-chairman of the National Council of Traditional Rulers of Nigeria (NCTRN).

The neem (Dogoyaro) leaves, bitter leaves claim by the Ooni of Ife

Part of the video narration read: “These five materials are pounded together and spread into the air (in an open place) for it to dry off to make an incense known as Turari in Yoruba.

“Prepare ‘hot’ coal in a bowl and put the grounded ingredients inside it and use the smoke to cleanse the environment and the air; to chase away the bad energy and the viruses from the air.

“The second use of that incense is that you can put the incense into hot water; with the help of blanket in an enclosed environment to heat the (human) body and inhale the steam from the water to enter into your body system.

“The fourth one is Ewe Ewuro in Yoruba popularly known as Bitter Leaves…pound it and take the powder with warm water once a day.

“The fifth one is mix Ewe Akoko in Yoruba popularly known as Boundary Tree with Ewe Dogoyaro and its fruit in Yoruba popularly known as Neem Leaves and its fruits. Then pound the two together and mix with any bathing soap and use them to bathe early in the morning. May Olodumare (The Creator) help us to eradicate and get rid of the COVID-19…Amen!”

Similarly, there have been various local news reports and posts online, especially on YouTube and Twitter, peddling claims that ginger prevents or cures COVID-19.

In a Channels TV news report, posted on its YouTube channel on July 20, 2020, Ayowande Adalemo, a techpreneur and COVID-19 survivor, claimed he got cured of the infection after using ‘herbs, fruits and vegetables’ which included ginger.

In the interview, he listed neem, avocado leaves, lime, turmeric, ginger, garlic, beetroot, pineapple and oranges among the items he used to treat the infection.

“Everybody at the risk of being infected, including the medical personnel should be required to take the herbal medicine. The aggressive use of herbal treatment can end COVID-19 Pandemic,” he stated.

In addition, some YouTubers have claimed on several videos that Christmas Melon, locally called Tagiri in the Yoruba-speaking part of Nigeria, could prevent all forms of sickness, including COVID-19.

This reporter visited a herbs seller in the heart of Ibadan, Oyo State capital, who claimed she had the antidote to the COVID-19 infection.

In a brief interview with the ICIR, Mrs Balogun said: “I have the herbal remedies to COVID-19, like ‘Dogoyaro’ leaves, ‘Yayi’ tree barks, cocoa tree barks, ‘Ile-Pupa’ pepper and ‘Iyere’ (black pepper), among others. Once cooked together and drink regularly by any COVID-19 patient, it will cure the infection gradually.”

“People are not covering nose again because they’re now buying herbs for COVID-19 and keeping ‘Tagiri’  at home allegedly to prevent COVID-19 infection, as most people claimed that it’s working for them,” she added.

While the use of Tagiri for the prevention of diseases, including COVID-19, is a popularly held opinion among some Nigerians in the south-western part of the nation, their northern counterparts believe that ginger and Dogoyaro leaves can prevent or cure COVID-19 infection, this reporter observed.

For the purpose of this investigation, this reporter will focus on the neem leaves, bitter leaves, ginger and Tagiri , given that some of the other herbs and fruits like onions, garlic, among others, have been fact-checked here and here.

Who are the purveyors of the claims?

To ascertain who the purveyors of these claims are on the internet, this reporter utilised the Open Source Intelligence (OSINT) tools to unravel the spread of this information and authenticate the networks where the claims might have been shared.

Using keywords such as Tagiri, ginger, bitter and neem leaves with COVID-19 at different times, this reporter used Hoaxy® to visualise the spread of the information on Twitter. It revealed several individuals on Twitter handles disseminating the information to other groups of users.

The blue and lemon colours show normal accounts operated likely by humans. The yellow shows that an account is most likely neutral, while the orange and red colours indicate accounts that are most likely bots.

In addition, the edges that connect the nodes represent tweets that connect accounts through retweets or mentions. The direction of the arrow indicates the flow of information. The colour of the edge indicates whether the tweet contains a link to a claim or a link to a fact-checking article.

For the neem leaves, data showed that more than half of the tweet interactions visualised were most likely from human accounts. The same goes for the ginger.

But for the bitter leaves, it’s @vraman16, an account that exhibits normal activity on Twitter, whereas for the Tagiri, it’s @sn_20200122 which could not be evaluated as the Twitter account was locked or protected, except for its approved followers.

Also, when a Google Reverse Image Search – one of the OSINT tools – was carried out on a screenshot of the tweeted video by the Ooni of Ife, this reporter traced the clip to the Facebook page of the traditional ruler named: ‘Ooni of Ife Leadership Colloquium.’

Further findings revealed that the video originated from the Ooni’s palace as it contained the official logo of the monarch, which was also seen on another image here.

From Nigeria, Ghana to Madagascar and Tanzania, among other African nations, herbal remedies have been touted as antidotes to the COVID-19 infection, but none has been scientifically tested and successfully approved for human consumption.

The Malaysian researchers, however, concluded that the neem leaves and bitter leaves, alongside two other medicinal plants tested collectively, exhibited pleiotropic effects which could potentially provide a multimodal approach via antiviral, anti-inflammatory, and immunomodulatory effects in COVID-19 management.

“At present, it is evidently challenging to pool data from published studies due to variation in extracts selection and a lack of well-reported standardisation data of the investigated formulations. Still, it is quite clear that there is insufficient evidence of direct antiviral effects specific to the SARS-CoV-2.

“Further investigations on differential anti-inflammatory and immunomodulatory effects, as well as quality and safety of herbal medicines, are required to ascertain their role in COVID-19 management.”

Earlier, fact-checks by the BBC News Pidgin and the AFP had debunked claims that the neem leaves could knock out the COVID-19 infection from the human body.

Similarly, the National Academies of Sciences, Engineering, and Medicine on its website emphatically stated that consuming ginger would not prevent or cure COVID-19.

“Consuming ginger—whether by eating the ginger root, drinking ginger tea, taking ginger capsules, or sniffing or adding the ginger powder to your food—will not prevent or fight a coronavirus infection,” it stated.

According to the World Health Organisation (WHO), there is no scientific evidence that covering yourself with a quilt during high fever and drinking ginger soup would prevent COVID-19.

In addition, “there is no scientific evidence that black pepper, honey and ginger protect from COVID-19 infection. In general, however, some spices are considered to have properties that may be beneficial for health.”

However, WHO recommends the consumption of adequate fruits and vegetables as a part of a healthy diet. 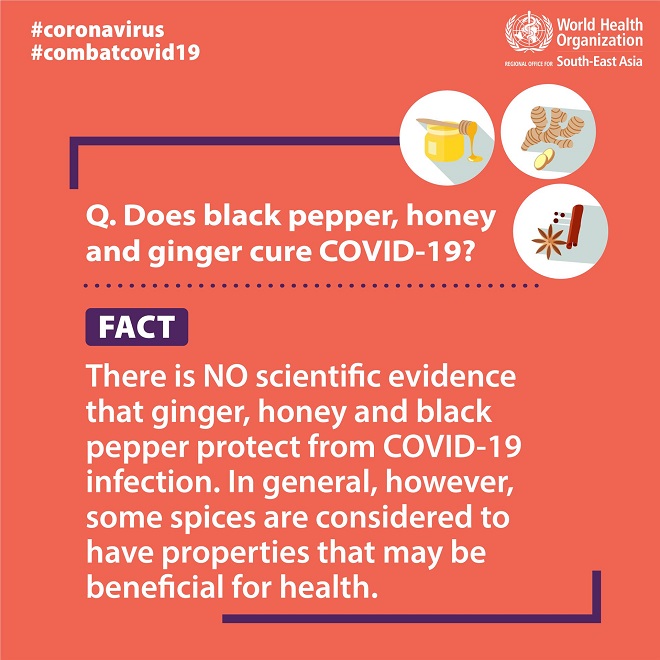 An Infectious Disease Physician at the University of Jos Teaching Hospital Nathan Shehu told the Voice of America, “It is a fact that herbal remedies are available and could be effective in the management of COVID-19, but it is important that before they’re deployed for such purposes, they should undergo elaborate trials to validate whether they are functional or not because you’re dealing with human lives.”

Is Nigeria ready to approve the use of herbal medicines for COVID-19 prevention or cure?

The Nigeria Centre for Disease Control (NCDC) said it was working assiduously with other government agencies in the quest to end the COVID-19 pandemic in Nigeria.

“The development of therapeutics is a long and strenuous process that requires great attention to detail and huge investments. It is very difficult to start this from the scratch during a pandemic.

“We are fully committed to supporting local initiatives that meet safety and other related requirements. This has been emphasised by the Directors-General of NAFDAC and the Nigerian Institute of Pharmaceutical Research and Development (NIPRD), whose agencies have the mandate for drug development.

“We will continue to support validated scientific outputs led on and carried out by Nigerians,” NCDC’s Head of Response Division Aderinola Olaolu, a doctor, told The ICIR.

The claims that neem leaves, bitter leaves, ginger and Tagiri can prevent or cure COVID-19 are FALSE! There is no credible scientific evidence to support such claims currently.

This publication was produced as part of IWPR’s Africa Resilience Network (ARN) programme, administered in partnership with the Centre for Information Resilience (CIR), the International Centre for Investigative Reporting (ICIR), and Africa Uncensored. For more information on ARN, please visit the ARN site.

THE Presidency has warned against any form of reprisals in the wake of killing...

BRITISH Prime Minister Boris Johnson has said he is humbled by the report from...

SUNDAY Ola, one of the House of Representatives aspirants in the All Progressives Congress...

THE Abuja Environmental Protection Board (AEPB) has established more mobile courts to hasten the...

NINETEEN young children and two adults have died from a shooting at Robb Elementary...
Advertisement