Can walking barefoot increase the size of a man’s genital? 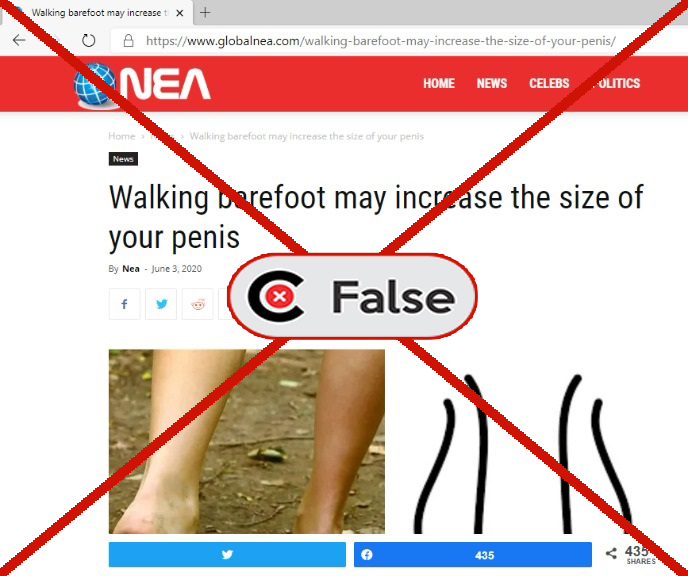 A VIRAL blog post claims that walking barefoot may increase the size of a man’s penis.

The report, published on June 3, 2020, on Globalnea.com, has been shared several times on social media including Facebook, Twitter, and many WhatsApp groups.

That walking barefoot may increase the size of the penis.

The report which started with a question “Did you know that simply taking your time to walk barefooted can significantly increase the size of your penis?” did not provide any verifiable medical and scientific sources for the information it presented.

It, however, made vague attributions to “Canadian researchers who spent two years in the Democratic Republic of Congo trying to bust the myth of natural penis enlargement went back home with newfound length and girth”.

Findings by the FactCheckHub revealed that the claim is not supported by any medical or well-studied scientific research.

Contrary to the blog’s claim, the parents’ genes play significant roles in the formation of a person’s male member since it is genetic, Adrienne Santos-Longhurst wrote in an article published by healthline.com.

She added that “Hormones play a role in your penis size from the start. Androgens determine penis size during early foetal development. Throughout puberty, testosterone and growth hormone regulate penis growth, including length and girth.”

A study also finds the average growth rate of the male genitalia to be less than half an inch per year from ages 11 to 15, adding that they do the most growing during puberty, but puberty and penis growth happen at different times and speeds for everyone.

“Typically, your dong’s as long as it’s going to get by the age of 18 or 19, and it reaches maximum girthy-ness shortly thereafter.

“For some, the penis can stop growing a year or two later than that, depending on when puberty starts. For reference, puberty usually begins between the ages of 9 and 14 and lasts up to 5 years or so,” Santos-Longhurst said, adding that there’s nothing a man can do to make his genital grow bigger or smaller, aside from surgery.

Similarly, Jerry Kennard, Ph.D., a psychologist and associate fellow of the British Psychological Society, in an article warned that men should be wary of exercises claiming to increase penis size.

“Because there are no muscles involved, there are no exercises able to build either the penis’ girth or length,” Dr. Kennard wrote on the medical blog.

He also corroborated Santos-Longhurst’s view, noting that: “Penis growth is influenced by the hormones of puberty. As such, the penis begins to grow more rapidly than usual between ages 10 and 14 and can continue to grow until ages 16 to 21.”

“Many young men become concerned or self-conscious about penis size during adolescence, but the vast majority reach a completely normal penis size by the late teen years,” Dr, Kennard noted.

In a telephone chat with the FactCheckHub, Dr. Obi Okechukwu (MBBS ABUAD), a Medical Officer at the Chiver Specialist Hospital & Urology Centre, Abuja in Nigeria said the claim should be disregarded.

“I think that’s built on ignorance and it should be disregarded. I’ve never seen that in any textbook or any journal. The size of (a man’s) penis is determined by several things but definitely not walking barefooted. One of them is race and genetics; and the size of a father’s penis will affect the size of the child’s own.

Also speaking with the FactCheckHub, Dr. Bolaji Ahmed, a Medical Advisor with the Damien Foundation, Nigeria, said the claim is untrue.

From available information, the claim that walking barefoot may increase the size of a man’s penis is FALSE.