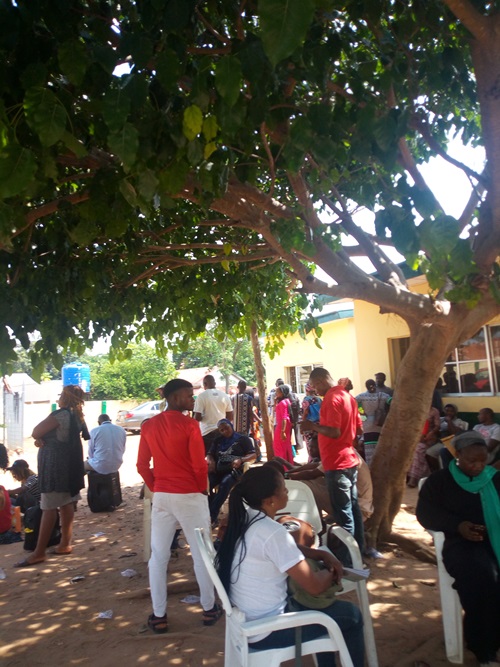 AFTER the conclusion of the Kogi governorship polls, residents of the state, and opposition parties have condemned the high level of violence, vote-buying and intimidation of voters which disrupted the conduct of the elections in several areas across the state.

Twenty four candidates took part in the election including Governor Yahaya Bello of the All Progressive Congress, APC, and Musa Wada of the People’s Democratic Party, PDP.

The ICIR observed major political parties offering bribes in money and food stuffs to voters before and after election.

In Lokoja, the state capital, voting was interrupted by armed thugs who tear gassed voters and staff of the Independent National Electoral Commission, INEC before carting away ballot boxes and electoral materials.

Also at LGEA school Lokongoma Phase 1 in Lokoja, gunmen invaded the polling units and disrupted the voting process while an unmarked helicopter hovered around the area.

Security operatives did not make any effort to prevent the heist at any of the polling unit, hence most voters ran into safety.

Eleojo Musa, an INEC staff  said armed men wearing uniforms looking like military fatigue approached security personnel  on duty before they carted away election materials and forcefully took away a corp members at the polling unit.

“They were wearing “terror” police uniforms and they talked to the police officers on duty before taking the election materials and some corpers into their vehicles as they shot sporadically in the air,” he said.

In Kabba/Bunu Local government, at St. Paul Primary school, in ASUTA ward, at polling units 001 and 004, some party agents were seen distributing rice and spaghetti packed in yellow nylon bag to people who are able to provide their voter’s card.

Zainab, a resident bluntly told The ICIR  her vote would be cast for the highest bidder.

The situation is the same at Crowther Memorial School, Lokoja where voters queued up to receive money from APC party agent while voting was ongoing. And the security operatives attached to the polling unit were indifferent.

Section 124 of the Electoral Act stipulates that the offences of bribing or receiving any money or gift for voting (or to refrain from voting) at any election prescribes a 12 months jail term or more.

The gubernatorial candidate of the  Social Democratic Party, SDP, in Kogi State called for the cancellation of the election in several parts of the State citing irregularities.

“Ballot boxes were destroyed and burnt in Okene, Adavi, Ajaokuta and Ogori Magongo and Okehi Local government areas and other parts of the state.

“Our agents were chased away from the various polling units of the Kogi Central Senatorial District,” she said.

Alleging that Saturday’s election had been tainted by reports of violence, thuggery and voters harassment.

“I am therefore calling on INEC and in line with its powers as enshrined in the Electoral Act, 2010 as amended to cancel the election in Kogi Central Senatorial District and some part of Lokoja and order for a rerun,” she said.

In the same vein, Dino Melaye candidate of the PDP in the Kogi West Senatorial District re-run elections also described the elections as a ” helicopter” election.

“The innovation is that what we had is what I have christened ‘Helicopter election’. For the first time, rigging has been advanced to the level that now the use of a helicopter in perpetuating this electoral atrocity manifested yesterday.

“Helicopter hovering around Polling units in Lokoja, dropping bullets on innocent, harmless citizens and electorate; and as I speak, yesterday, teargas being fired from this helicopter,” he said.