PRESIDENT Muhammadu Buhari has been asked to follow through his anti-corruption war with monitoring, investigating and taking punitive actions against public office holders accused of corruption.

The call is coming on the heels of an investigation by the International Centre for Investigative Reporting (ICIR), that indicted MDAs of making inflated payments on Personal Protective Equipment (PPEs) and award of COVID-19 contracts without evidence of procurement plans.

Abba who carried out the investigation accused public servants and MDAs of cashing in on the misfortune brought on the people by the COVID-19 pandemic.

He, however, disclosed that the National Primary Health Care Development Agency, (NPHCDA) inflated prices of infrared thermometers by more than 200 percent.

Expressing his displeasure at NPHCDA’s overblowing of COVID-19 procurements prices, he added that contracts were awarded to contractors who are not even registered at Corporate Affairs Commission, CAC.

“NPHCDA offered lucrative contracts without a fully competitive bidding process to four companies at the tune of N226,167,500 to supply 2,615 infrared thermometers.

“The contracts were worth four times more when compared to retail prices on online retail shops like Jumia and Amazon. 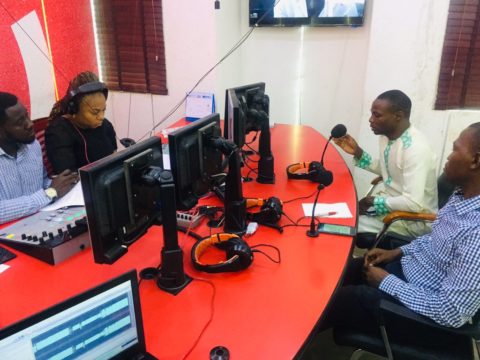 “The contract quoted by the four companies involved showed that the price for a single unit was between eighty to eighty-four thousand naira while in the market you can get it for twenty thousand naira and that is a huge difference,” Abba said.

He bemoaned the continued silence of anti-graft agencies after unearthing corruption in the system while stressing the need for the Federal Government to lead the way in bringing corrupt public officials to account.

On tacking systemic corruption in Nigeria, he had this advice for President Buhari: “Match words with actions and hold people responsible for crimes committed.

“It is not enough to hold press conferences, not enough to say you are fighting corruption. Be deliberate and definite about it and be serious.

“Words without actions will just be a jamboree. That keeps coming every year and we hear the same rhetoric but words are not matched with action,” Abba said.

Similarly, the Convener of Stay Away Corruption Campaign (SACC), Raji Adiba, who also featured on the program asked President Buhari-led administration to invest their energy in monitoring corruption in the public sector and called for more transparency in governance.

According to Adiba, corruption in the health sector at the heat of the pandemic was unacceptable and catastrophic to the wellbeing of the Nigerians, while stressing that bringing corrupt Nigerians to book will send the right signal to others.

A participant on the show identified as Dale towed a similar line. Dale who phoned in during the show expressed frustration that the public officers could endanger the lives of health workers and patients. “The most painful thing is that the perpetrators of this heinous crime will go unpunished,” he lamented.

The syndicated radio program is produced by PRIMORG with support from the MACARTHUR FOUNDATION.