The delay in the issuance of the student’s ID negates the university provision which states that students must identify themselves by providing identity cards when required.

Students who do not have an identity card may be denied access to university facilities or other benefits meant for students especially as a pass into the examination hall. 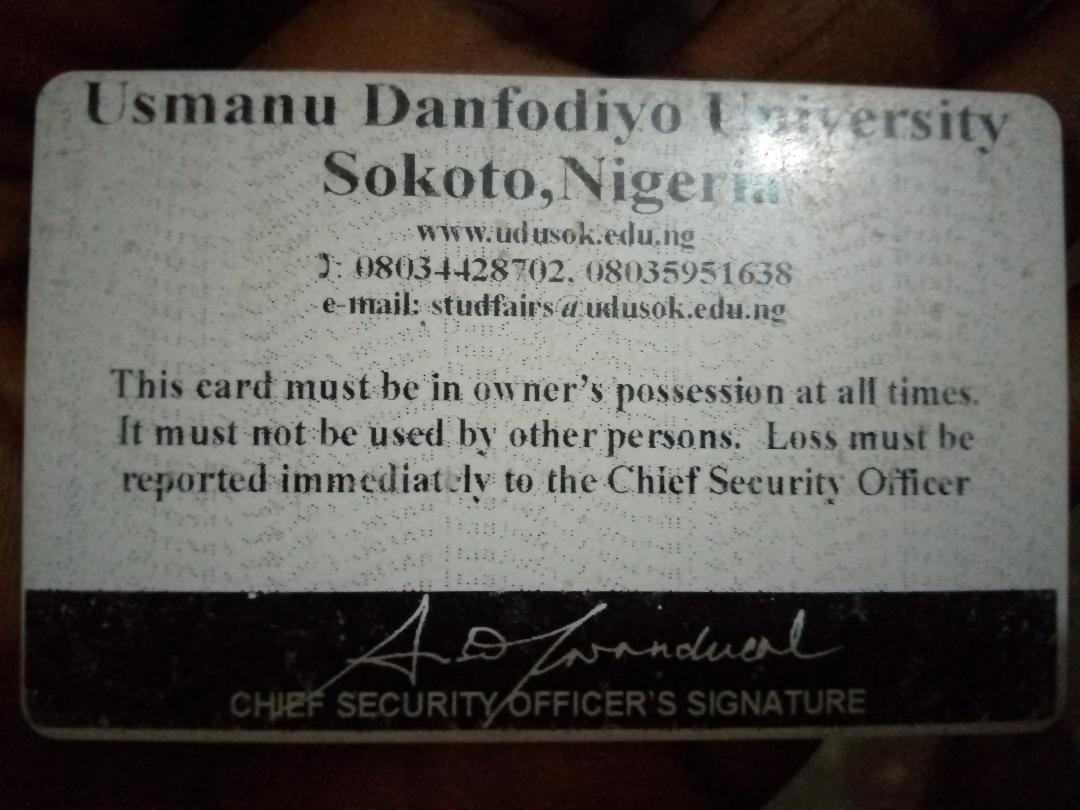 The Student Affairs Division of Usmanu Danfodiyo University, Sokoto is responsible for the issuance of identity card to students upon the payment of prescribed fees determined by university management.

In place of the card, a confirmation letter – 210 X 297-millimetre sized document – given at the point of confirmation of admission is the sole the means of identification for the students, but they hardly have it handy for fear of misplacing it.

Students’ frustration due to non-issuance of ID card

Already, many students have forfeited a number of opportunities because they could not present their student’s Identity Card. Sheriff Oshubiyi, a 200 Level student of law, is one of those ruing the indifferent attitude of the university’s authorities to resolve issues around the delay in issuance of the ID.

“It is very disheartening that up till now we have not been issued our school I. D card, a frustrated Oshubiyi laments.

“As a student, there was an Oratory contest for university students which I have been eyeing for a long time but I could not because they requested an identity card.”

While relating an oratory contest he missed because he could not provide an authorised  proof he is a university student, he urged the management to speed up the process of issuing the ID card.

This, he suggests should be done in earnest so that newly admitted students will not suffer the same fate.

I hope the school management would resolve this matter by issuing the ID card to the concerned students to focus on the new students, Oshubiyi said.

Another student who goes by a name, Barakat, and also a 200 Level student of Political Science, says  she has found it difficult to take advantage of opportunities such as scholarships and symposium that are available to students.

“I have stopped bothering myself about applying for scholarships that require me to submit my proof of studentship because we don’t have one. Some of us need the ID card to apply for opportunities, but we could not,” Barakat said.

“Often time, this card is requested by security personnel along highways whenever we are travelling back home, if not for those in higher levels that provide it, who knows? We might be tagged criminals. We just hope we would be given before it is too late”

Disappointed, Adedeji Mutmainah, another 200 Level student  at the Department of Public Administration, blames the delay in the issuance of ID card on maladministration by the management of the tertiary institution.

She says, the tradition across other universities and indeed all tertiary institutions is that ID cards are issued  to students in their first year.

Second year into her study, Mutmainah felt disappointed that after a session she has no proof of her studentship.

“We should have been given the ID card to serve as evidence that we are a student of this school,” she said.

“Imagine anyone of us engages in a brawl and  claims to be a student of UDUS, is there any proof to support the person’s studentship? It is greatly disheartening. With this development, the onus lies solely on the management because the card should have been issued to us since our first year. I was expecting it, and it is quite uncalled for.”

When she attempted to apply for an accounting program, Mutmainah recalled how she almost missed the opportunity, but was saved by obtaining the National Identity Card to prove she is a student.

“Last session, I wanted to enroll in an accounting program, but I couldn’t. The organisers requested my school identity card during registration which obviously I don’t have. I had to go extra miles, enrolled for NIMC card because I could not provide any proof that I am a university student,” she recalled.

Abdulwakil Busari, 200L student of Engineering, fault the lateness of the management on student’s identity card. With anger visibly written on his face, identity cards differentiate between students and visitors, he posited. And a university hemmed by satellite villages with their population as the university, Abdulwakil feels insecure.

“I don’t have any grouse against the management, they should just give us the id card because we don’t have any means of identification except the confirmation letter. And to that extent, we are not secure. With the ID card, we would be able to differentiate between Yaro boys and students”

Reacting to the problem of non-issuance of ID and it’s implications for students, Adegbite Taoheed, a  400 Level student of Literature in English stated that ‘it is often very difficult to recognize students on campus.

Taoheed wondered how security personnel on the campus are able to identify students and visitors when certain population of students are without Identity Card even after a year in school as students.

“With ID card, there would be easy identification of students, and if at all they want to apprehend anybody – a visitor or stranger, the security would be able to identify strangers from students.”

We are processing it – Dean, Students’ Affair

When contacted, the Dean, Students’ Affairs, Aminu Mode revealed that once the card is ready, the students would be notified as the management is already working to ensure that it is available to all the affected 200 level students.

“The ID card is being processed. Immediately it is ready, we would notify the students”. Even today, we wanted to go and check, but I have been in a meeting since morning,” Mode explained.

Speaking on the campaign for the use of lanyard with their ID in the university,  Mode stated that the campaigners should have channeled their concerns to the appropriate authority for consideration.

The DSA who revealed that the university would soon unveil her anthem courtesy of a student’s recommendation charged students to write the management on burning issues on campus, noting that the management would gladly welcome such advances.

“As a student, forget about your affiliation, write to the management and propose it. The university would even commend the students. Because it is a common practice in universities, it would help to secure the ID card, we would do the needful. I only get to read it on social media platforms.

“Presently. We are working on the university anthem, it was proposed by a student in my dept (Modern European Languages and Linguistics, MELL) through my office and the university form a committee, I am a member.

But when you continue to write without meeting with the management, no one would make any changes among them. When you write to the university through the students’ affairs, it can make changes.”
Speaking further, The DSA, therefore, said the management would clinically look into it “even if we would say students should pay one naira or ten naira for it, we would have to sit and deliberate on it.”