DATA: What figures say about the performance of outgoing two-term governors 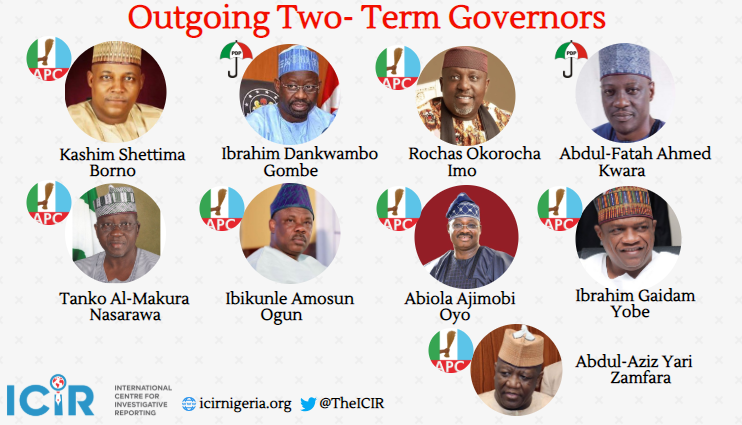 THE 2019 general elections might have come and gone, though, leaving moments that tested the integrity of Nigerian democracy.

Nine states governors have served two terms as the chief executive officer of their respective states.

The governors were elected into office in 2011 and were re-elected in 2015.

This analysis aims to identify and check what some key indices of development were when they took over in 2011 and what those indices are now.

Some of the parameters identified by The ICIR include the Internally Generated Revenue (IGR), debt profile, percentage of state income (IGR in addition with the Federal Account Allocation Committee, FAAC).

The IGR which is the revenue that state governments generate within the areas of their jurisdiction comes from various sources such as taxes, fines, and fees, licenses, earnings and sales, rent on government property, interests and dividends, among others.

As at third quarter of 2018, the last report on IGR as published by the National Bureau of Statistics (NBS), five out of the nine states have been able to increase their internally revenue base with more than 100 percent from what it used to be in 2011. The states include Borno- 103 percent, Nasarawa- 106 percent, Ogun- 482 percent, Oyo- 105 percent, and Zamfara- 160 percent.

States like Gombe- 16 percent, Imo- 98 percent, Kwara- 82 percent, and Yobe- 21 percent recorded increase in their internally revenue base, however, below 100 percent for the eight years. 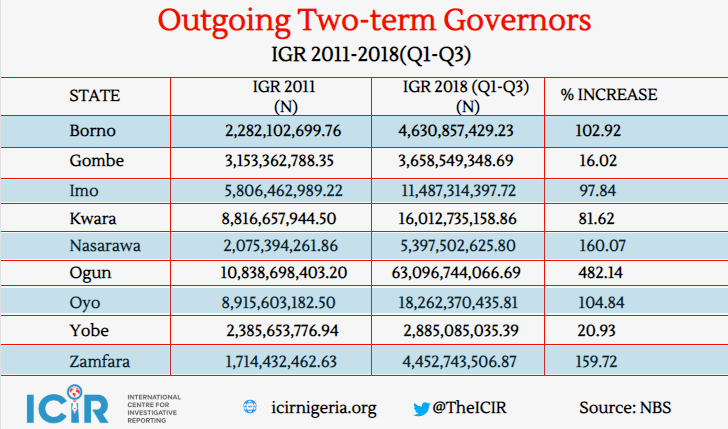 IGR, arguably, reflects the capacity of governors to harness what is within their control. Naturally, the onus is on state and local governments to ensure their ‘area of command’ is not over-reliant on the monthly federal allocation.

Data from the Debt Management Office (DMO) as of June 2018 shows that eight out of the nine states have increased their public debt – both domestic and foreign debt by at least 50 percent. The states are Borno, Gombe, Imo, Nasarawa, Ogun, Oyo, Yobe, and Zamfara. Only Kwara state’s debt profile reduced by 11 percent.

In 2011, Kwara state debt profile stood at $206.9 million, it reduced to $182.6 million. Obviously, the state either reduced its borrowing or paid off some of its debt. 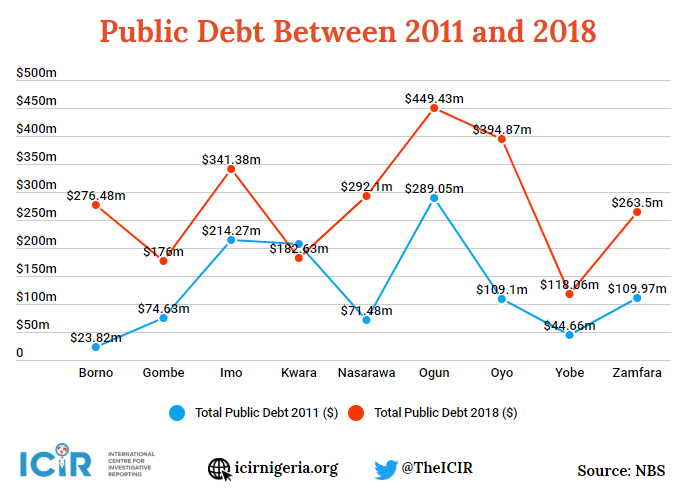 According to the 2018 edition of the State of States Report released by BudgiT, a civil society organisation, it defines fiscal sustainability as the ability of a government to sustain its current spending, tax and other policies in the long run without threatening its solvency or defaulting on some of its liabilities or planned expenditures.

The report also measures the fiscal sustainability of the 36 states in the federation.

Three major indices were used in the scoring the state.

‘Index A’ assesses the ability of states to meet their recurrent expenditure obligation with state-owned revenue like value added tax, 13 percent derivation and IGR. ‘Index B’ analyses states’ ability to cover all recurrent expenditure obligations without resorting to borrowing, while ‘Index C’ focuses on states’ ability to manage their debts sustainably.

According to the report, fiscal sustainability index for these nine states is ‘woeful’. The report scored the index on a scale of 100.

This clearly shows that these states among other states need to focus on boosting its IGR and simultaneously slow down on borrowing.

Note: Exchange rate for 2011 was N155 and currently stands at N305 to a dollar according to the Central Bank of Nigeria (CBN)