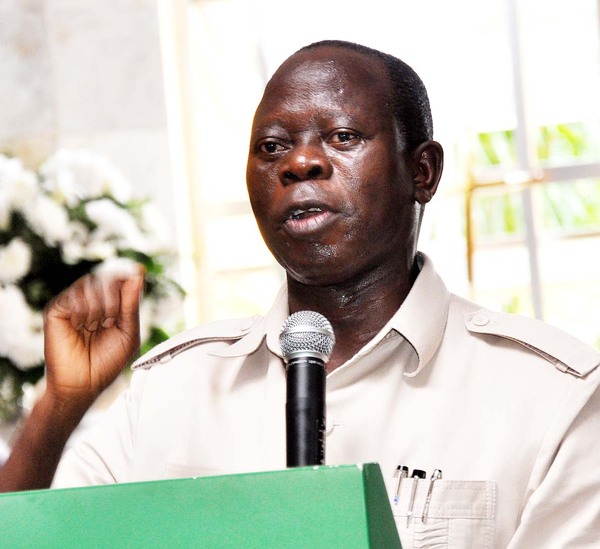 Edo state governor, Adams Oshiomole, has urged the leadership of the Nigeria Labour Congress, NLC, to demand the review of the privatization of the power sector under the previous administration of Goodluck Jonathan for record of transparency.

The Edo governor made the appeal on Thursday during an anti-corruption rally organized by the NLC at the Samuel Ogbemudia Stadium, Benin.

Oshiomole accused the immediate past administration of selling out the power sector to individuals with no clue of operations in the working of the industry.

“When the government decided in the name of privatization, to hand over our electricity to their friend and brothers, they handed over Edo, Delta, Ondo and Ekiti states to one family, a pharmacist and a retired bankers. The husband is the chairman and the wife is the managing director of the company,” the governor stated.

He said further: “They have no history of being involved in electricity industry. I’m proud to say that when they did that, i called a press conference in Abuja, I was joined by former Delta State governor Emmanuel Uduaghan, but one other governor refused to join because of fear of been victimized. We spoke the truth that the privatization amounted to the abuse of office.”

The governor alleged that the public funds required to provide infrastructure and good governance were being diverted to private pockets, thereby turning Nigerians into victim of corruption.

He called on Nigerians to support the corruption crusade of President Muhammadu Buhari in the bid to check the societal menace.

“It is time to be vigilant. Let us resolve to do our part so that Nigeria can fulfil its promise. We elected a man of integrity, understanding and one we can trust to lead the army against corruption.

“There is corruption in high places and there is corruption in low places. You have chosen to stand with Buhari to get things right and I believe you can always be the beneficiaries. It was sad that we kept quiet when cases of corrupt practices were raised in the parts,” he observed.

He went on to indict the former president in the mismanagement of the country’s oil sector and also accused Goodluck Jonathan of awarding the pipeline protection jobs to ex-militants and individuals against the nation’s security agencies.

Earlier, the chairman of Edo State chapter of NLC, Comrade Emmanuel Adedokun, assured Nigerians of Labour’s resolve in tackling corruption and pledged its support to the fight of President Buhari to eliminate corruption.

“It is our conviction that the elimination of corruption will functionally be the beginning of our national prosperity.  As an organisation whose objective is to promote positive change in Nigeria. We are happy with President Muhammadu Buhari national posture on the frontal attack against corruption,” he concluded.