A few days after the passing of American television and radio host, Larry King, a post surfaced online in Nigeria that he survived several ailments and multiple divorces before finally dying of COVID-19.

The post was meant to get people to take COVID-19 seriously and observe its prevention protocols, like wearing masks. 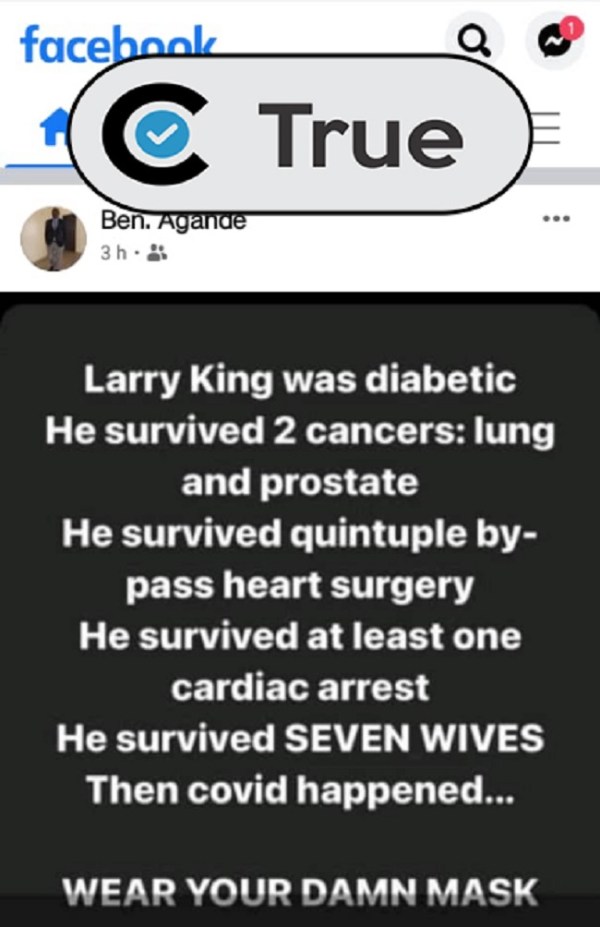 Larry King was a prominent broadcaster and host of the famous show – ‘Larry King Live’ on Cable News Network (CNN).

He hosted the show for more than 25 years and recorded over 6,000 episodes.

King died at 87. His family announced his death on January 24, 2021, on his verified Facebook page.

“He was an amazing father, and he was fiercely loyal to those lucky enough to call him a friend. We will miss him every single day of our lives,” the statement reads in part.

King’s family did not categorically state the cause of his death. However, his former employer said he was hospitalized for contracting COVID-19.

A day before, Ora Media, a firm he co-founded also disclosed that he died at the Cedars-Sinai Medical Centre, in Los Angeles, United States.

For 63 years, the ace broadcaster worked across different news platforms such as radio, television, and digital media. “Larry’s many thousands of interviews, awards, and global acclaim stand as a testament to his unique and lasting talent as a broadcaster,” the firm stated.

King has suffered from a series of ailments and largely managed to survive them. Some of which are cancer of the lung and prostate cancer.

Medical doctors discovered a stage 1 tumour during the broadcaster’s annual chest X-ray, which was removed via surgery.

In an interview with EXTRA, King said he had a heart attack and a heart surgery.

“I have a check-up every year. I have gone through a lot in my life – I’ve had a heart attack and heart surgery. Part of my check-up is the chest X-ray, and that is the protocol, I do it every year. Then, the doctor says I see a little spot here,” he said.

In a statement to the CNN, his representative also stated that King  was “diagnosed with stage 1 Adenocarcinoma, the most common type of lung cancer, through a routine chest examination.”

The report also noted that King has type 2 diabetes.

On February 24, 1987, King suffered a heart attack. The heart disease was found to be hereditary. When King was 9, his father died of cardiac arrest at 46. In an interview with Alene Dawson of the Los Angeles Times, he said:

‘I’ve had heart attack and heart surgery. I defeated prostate cancer, have type 2 diabetes, but I remain in good health…I follow my doctor’s wishes, I take my prescriptions drugs, I take a lot of vitamins…”

By December of the same year, the bypass surgery was done.

King was married eight times to seven different women, including Alene Akins, whom he married and divorced twice. One of his marriages was reportedly annulled.

His longest and last marriage was with Shawn Southwick.  He filed for divorce after  22 years of marriage.