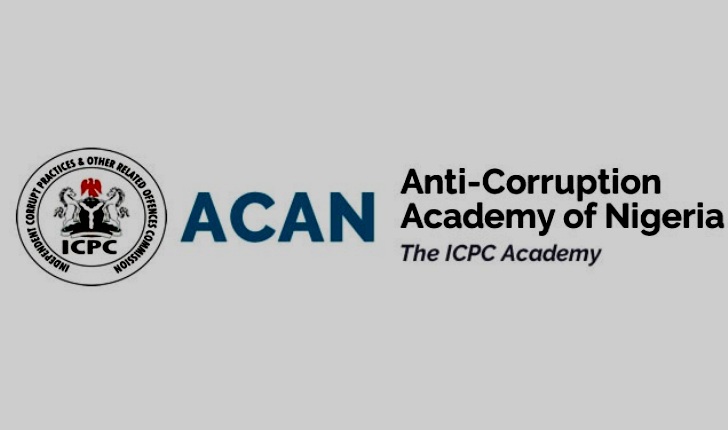 PLANS are underway by the Economic Community of West African States (ECOWAS) to adopt the Anti-Corruption Academy of Nigeria (ACAN) as a centre of excellence in corruption studies, particularly in the area of Corruption Risks Assessment (CRA).

ACAN is the training and research arm of the Independent Corrupt Practices and Other Related Offences Commission’s (ICPC).

In a statement on Tuesday, Rasheedat Okoduwa, the spokesperson of the ICPC, said the resolution was reached at a consultative meeting of the Network of Anti-Corruption Institutions in West Africa (NACIWA) to develop faculties for training on Corruption Risks Assessment.

At the meeting, which was held at the ECOWAS Commission in Abuja, participants commended the efforts of the ICPC in coming up with the CRA as one of its prime prevention tools, saying there was the need to apply it across a wider sub-region.

In his speech, the Director, Political Affairs of the ECOWAS Commission, Remi Ajibewa, said the CRA, when well implemented, could prove the most effective strategy in the ongoing campaign against corruption.

Ajibewa, who was represented by Head, Democracy and Good Governance Division of ECOWAS Commission, Eyesan Okorodudu, pointed out that the welfare of citizens had dwindled significantly due to the corrosive effects of corruption, hence the collaboration between the ICPC and ECOWAS could not have come at a better time.

Also, Walter Amewu, from the Economics and Organised Crimes Office (EOCO), Ghana, and Thiendella Babou, Chief of Department of Administration and Finance, Senegal, said that their respective countries were already working towards establishing anti-corruption academies of their own, following lessons learnt from ICPC’s Anti-Corruption Academy of Nigeria (ACAN).

In his keynote address, Chairman of the ICPC, Bolaji Owasanoye, who was represented at the meeting by the ACAN Provost, Sola Akinrinade, said the ICPC places more priority on measures that could prevent corruption.

“Our prevention tool includes Systems Study and Review, and Corruption Risk Assessment (CRA). Systems Study and Review involves examining particular systems and procedures of government that are prone to corruption and advising and/or directing affected agencies of government to review their operations to tackle identified problems. Corruption Risk Assessment is an extended version of system studies and reviews but with some proactivity.”

Akinrinade disclosed that 115 Federal Ministries, Departments and Agencies (MDAs) were currently having their personnel costs and capital expenditures examined and reviewed by the ICPC through a system study to ascertain their levels of budget implementation, and integrity of project execution for 2017 and 2018.

He also called on all anti-corruption agencies to forge synergies and share experiences and intelligence in order to better tackle the menace of corruption in Africa.

She said CRA “is a process of identifying system weaknesses that could lead to corruption and what effect such corruption might have in order to avoid or mitigate the negative consequences.”

Okoduwa noted that the goal of CRA was to develop an integrity plan to strengthen accountability and transparency towards checking corruption and institutionalising integrity.

Some of the benefits of CRA highlighted by the Commission’s spokesperson include: raising trust that public institutions are carrying out their functions with integrity; reinforcement of coherence and quality of governance in organisations; and strengthening ethical and governance standards.

The NACIWA meeting was attended by participants from across Africa including Guinea Bissau; Niger; Guinea; Burkina Faso; Cote D’Ivoire and Liberia. Others were: Sierra Leone, Senegal; Ghana; Togo; and Mali.

Some other resolutions of the meeting were: to enforce various anti-corruption laws; sensitise the public against the ugly trend; advocate for Standard Operating Procedures and Codes of Ethics for member states; and localise the anti-corruption struggle so that those at the grassroots can own the fight, monitor and demand for accountability from their leaders.

A ‘private visit’ to Her Majesty the Queen

Digital Switchover scam: Lai Mohammed may have a case to answer