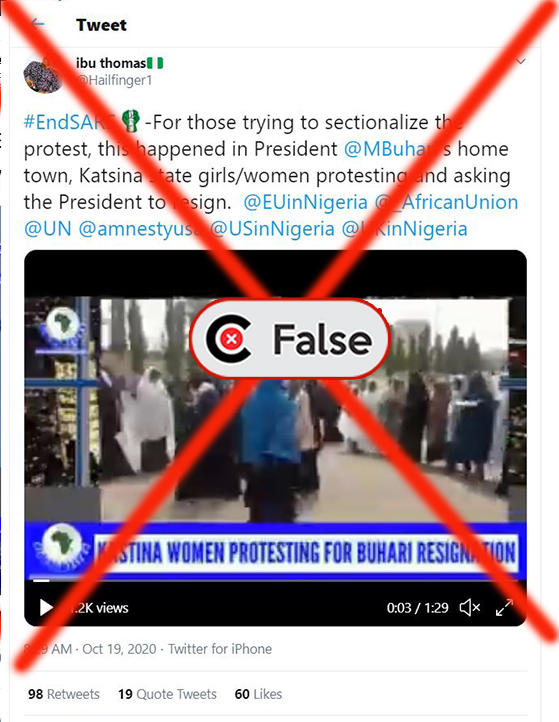 A video that went viral on Saturday, October 17, 2020, claimed that women in Katsina State have joined the #EndSARS protest to demand for the resignation of  Muhammadu Buhari as Nigeria’s president.

The video has been shared multiple times online.

Some of the captions accompanying the video alleged that the women in President Buhari’s state of origin, Katsina State have joined the ongoing #EndSARS  – a decentralised youth-led protest asking the government to end bad governance and police brutality in the country.

A Twitter user, @Acupofmikey, tweeted the video with the caption: “Kastina Queens have entered the chat. Your time is up”  while adding the hashtag: #EndSARS.

Another Twitter user, @hailfinger1, tweeted the same video with another caption: “#EndSARS-For those trying to sectionalise the protest, this happened in President @MBuhari’s home town, Katsina state girls/women protesting and asking the President to resign.”

That Katsina women have joined #EndSARS protest and are calling for Muhammadu Buhari’s resignation as the President of Nigeria.

Checks by The FactCheckHub  show that the caption does not tally with the content of the video, thus making it FALSE.

The women in the video where chanting in Hausa – a major language in Northern Nigeria.

The woman with the megaphone in the video said an expletive word while other women chorused a response with “Hey, Buhari, modern day Pharaoh, release our leader/cleric.”

This chant is more in line with the free El-Zakzaky movement.

Muhammadu Buhari is the current president of Nigeria who came to power as a democratically-elected president in 2015.

Sheikh Ibraheem El-Zakzaky is an Islamic scholar and religious leader who was arrested under Buhari’s administration, leading to widespread protests calling for his release. 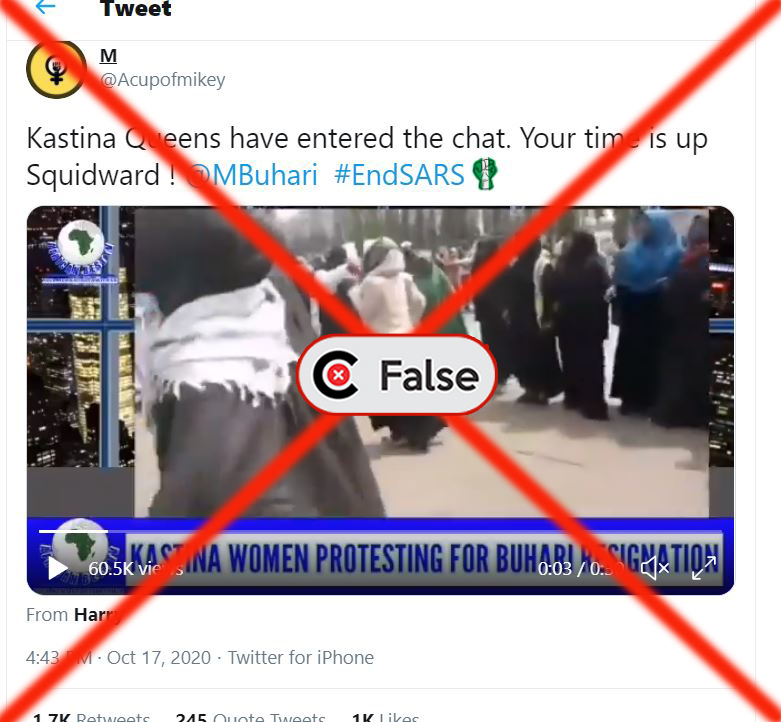 He was incarcerated after a clash between his sect and Nigerian soldiers. He was granted bail by the court many times but the order was reportedly not obeyed. This led to multiple protests by the sect members demanding for his release.

The chant “Modern day Pharaoh” alludes to the Pharaoh in the Abrahamic religion that refused to let the Israelites go even after multiple requests. While “Release our leader” refers to El-Zakzaky who is in  detention.

In addition, at no point in the video did they called for the resignation of President Buhari.

The video is that of a protest calling for the release of El-Zakzaky and not Katsina (which was wrongly spelt as Kastina) women joining the #EndSARS protest as alluded.

The claim is FALSE, as the women in the video were neither calling for the resignation of President Buhari nor were they making reference to the #EndSARS movement.

This report was originally published by FactCheckHub