Fowler’s name popped-up alongside that of Tukur Buratai, the immediate past Chief of Army Staff (COAS); Mbu Joseph Mbu, a retired Assistant Inspector-General of Police (AIG), and Ahmed Ibrahim Dasuki, the late Sultan of Sokoto who died in 2016.

A document exclusively made available to The ICIR by the Center for Advanced Defense Studies, (C4ADS), a United State-based non-governmental organisation (NGO) shows that not less than 800 Nigerians were identified as owners of Dubai properties worth N146 billion.

The ICIR had earlier reported that Tafa Balogun, a former inspector general of police (IGP), who was disgraced out of office over corruption is one of the Dubai property owners.  The list includes jailed Olisah Metu, former National Publicity Secretary of the People’s Democratic Party (PDP), and his spouse, Kanayo Olisa Metu. Other influential Nigerians who own property in the city identified as “one of the enablers of global corruption, crime, and illicit financial flows” are former aviation minister, Osita Chidoka and his spouse, Chidinma Chidoka. They both own two flats at the Azizi Feirouz Apartments.

William Babatunde Fowler is a successful tax administrator and a strong ally of Bola Tinubu, a former governor of Lagos State and chieftain of the ruling All Progressive Congress (APC). Prior to his emergence as the executive chairman of the FIRS, during the first tenure of President Muhammadu Buhari, fowler led the Lagos State Board of Internal Revenue for about seven years.

He managed the board from 2006 – 2013, where he was applauded for transforming the state’s revenue.

In August 2015, he was appointed as the FIRS chairman. Four years after, by December 2019, he was sacked by President Buhari and replaced with Muhammed Nami. This however is unconnected to various corruption allegations leveled against him.

The late Abba Kyari, former chief of staff to the president in a letter dated August 8, 2019, queried Fowler over a shortfall in expected tax collection. He was asked to explain the rationale for alleged noticeable discrepancies in budgeted tax collections by the agency and actual collected tax between 2015 and 2018.

For instance, the letter stated that in 2015, real tax collected was N3.7trillion, while the proposed target was N4.5trillion. It targeted N4.027trillion in 2016 but collected N3.307trillion as total taxes. In 2017, the projected tax collected by the agency was N4.89trillion but it raked N4,027trillion and in 2018, the actual collection was N5.32trillion while the budgeted sum was N6.7trillion.

Though, the presidency exonerated Fowler, he was later arrested by the Economic and Financial Crimes Commission (EFCC) for his involvement over an alleged N100 billion tax evasion as it relates to Alpha Beta, a tax consulting firm supposedly linked to Tinubu.

Based on the C4ADS data, Fowler owns three apartments at Ocean Heights. The 83-storey building was completed in 2010, and a 2-bedroom in the apartment is sold at an approximate sum of $409, 000. This implies the three flats could have gone for about $1.22 million.

Fowler did not respond to calls and text messages sent to him by The ICIR.

From July 2015 to January 2021, Tukur Buratai, a retired Army lieutenant was the chief of army staff in Nigeria. Under his leadership, the Nigerian Army strived to restore peace in the North-East region, but not much success was recorded, due to several allegations ranging from non-payment of appropriate allowances, benefits, and supposed profiting from the decade-long crisis.

Buratai has always exonerated himself from personally owning a property in Dubai. He described the properties as family investments, made before he became the military chief.

“Substantial property is just an investment; my family does their own private business they should afford to have such property in Dubai.” Pushed further, he emphasized that, “the property I invested was far back as 2013 before I became the chief of army staff,” he told the BBC Hardtalk. 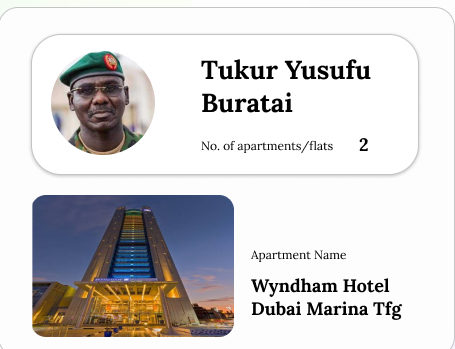 Nevertheless, available records from The ICIR show he owns two apartments at the Wyndham Hotel. This differs from the ones owned by his wife, Aishat Tukur Buratai who possesses two flats at the First Central Hotel.

A 2019 report authored by Mattew Page and published on the Carnegie Endowment for International Peace examined how the political elites have made Dubai a haven to stash away their ill-gotten wealth. Despite public concerns about the leadership of Buratai, President Buhari still submitted his name and that of past service chiefs for an ambassadorial appointment. On Wednesday, February 23, his appointment with others has been confirmed by the National Assembly.

In 2017, Vice President Yemi Osinbajo while acting as president appointed Aliyu Dikko Abdulrahman as Chairman, Governing Board of the Bank of Industry (BOI). He was appointed with Olukayode Pitan who was to serve as the Managing Director of the bank. 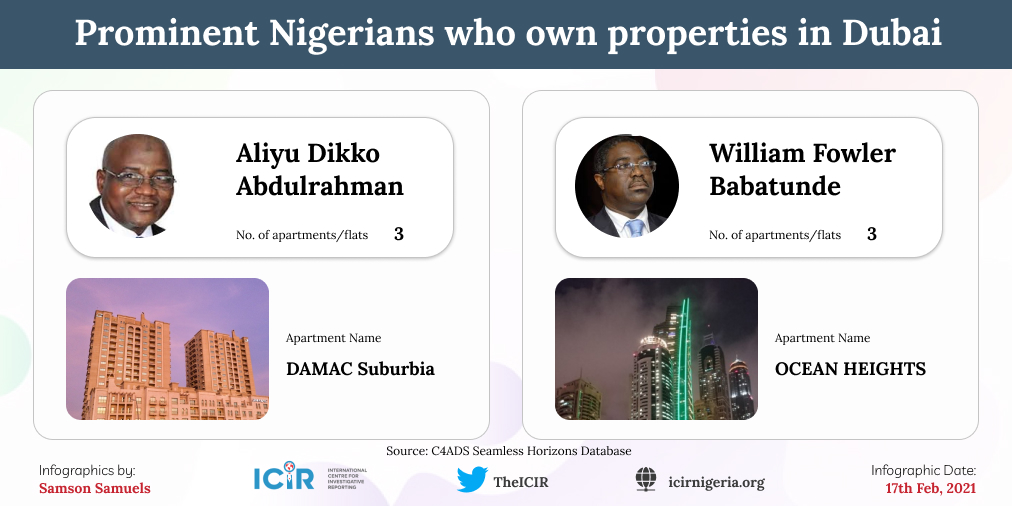 As of July 2020,  Abdulrahman was still the BOI chairman, but The ICIR could not ascertain his present status. He could not be found on LinkedIn, a professional social media group. The ICIR reached out to Hadiza Olaosebikan,  Head of Corporate Communications at BOI but she did not respond to calls. Text message to her line was also not returned.

Abdulrahman owns three flats at DAMAC Suburbia apartments located close to Sheikh Zayed Road, Dubai. It will cost nearly $254, 000 to secure one apartment in the twin-towers luxurious building. But, Abdulrahman remains one of the politically exposed Nigerians who owned apartments in Dubai.

Mbu Joseph Mbu is known as Nigeria’s most controversial police officer. In 2015, he gave a shoot-out order to the police as a way of preventing electoral violence in the wake of the 2015 general election. As former Commissioner in Rivers State, he is believed to have eschewed professionalism to satisfy political demands of the former president Goodluck Jonathan in Rivers. This occurred at a time Rotimi Amaechi, the state governor left the PDP for the ruling party while in office. 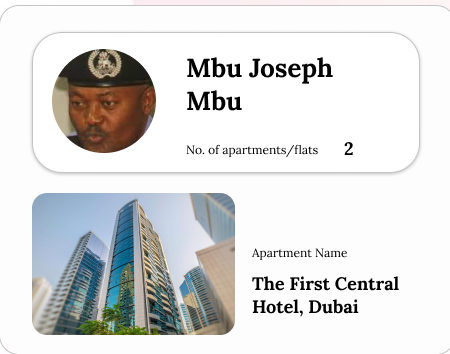 His strong closeness to Jonathan’s family, especially the first lady who was accused of over N9.2 billion fraud also became an issue of public concern.

After much public outcry, he was later removed from Rivers and posted as Police Commissioner in the Federal Capital Territory (FCT). He was eventually retired after spending 31 years in service. Findings from the property record showed that he owns two apartments at the First Central Hotel, where Buratai’s wife bought her two apartments.

Efforts to reach out to Mbu were also unsuccessful. His mobile number was unreachable and text message sent to his line has not been returned.

THE Federal Government has suspended the Accountant-General of the Federation Ahmed Idris over his...

THE All Progressives Congress (APC), has said its presidential primary election has been rescheduled...

The Nigerian National Petroleum Company (NNPC) has failed to remit money to the federation...
Advertisement