Tafa Balogun, Olisa Metuh and other prominent Nigerians who own properties in Dubai

SOME prominent Nigerians who had held political offices or had been in the corridors of power are owners of luxury properties in Dubai, a city in the United Arab Emirate (UAE).

According to a dataset shared with The ICIR by Center for Advanced Defense Studies (C4ADS), a US-based nonprofit newsroom, Nigerians own over 800 properties in Dubai.

Most of these Nigerians do not have clean slates, as corruption charges have been hung on their necks in the past.

While some have been acquitted of corruption charges, others are still caught in the web of multiple allegations of financial crimes.

And there are those who yet have not been accused of corruption.

Balogun served as the IGP of the Nigeria Police between 2002 – 2004 before he resigned his position following several allegations of corruptions. 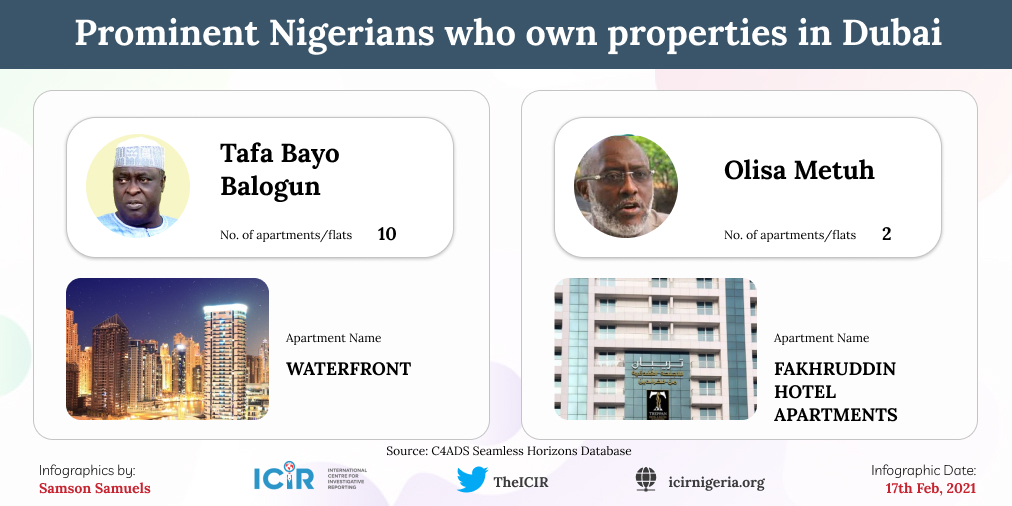 In 2005, after pleading guilty to the charges levelled against him, Binta Nyako, a judge of the Federal High Court, Abuja sentenced Balogun to six months imprisonment after he had spent 67 days in custody of the EFCC.

Although the EFCC said $150m-worth of cash and property acquired by Balogun would be seized by the government, records made available to The ICIR shows that the former IG still owns 10 choice apartments in Dubai.

Some of the buildings are located in the Lake City Tower, Marina Park, Waterfront, Goldcrest View, Dec Towers T1 and T3 among others.

Kalu, a former governor of Abia state and serving senator of Nigeria was convicted by the Lagos Division of the Federal High Court on Thursday, 5 December 2019 over allegations of fraud worth N7. 65 billion fraud. 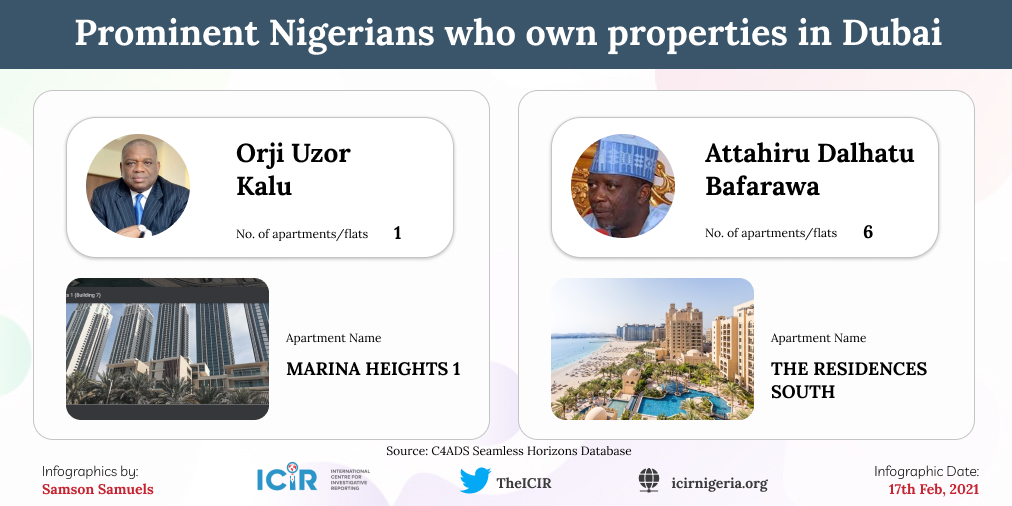 Idris Mohammed, the justice who sentenced Kalu to 12 years in prison found him guilty of defrauding the Abia State government through his company Slok Nigeria Limited.

After spending six months in jail, his sentence was overturned by the Supreme Court on the basis that the judge who sentenced him had been elevated to the Court of Appeal at the time of the judgement hence had no authority to deliver the judgement.

Although the court did not acquit him of the charges, it only ordered a retrial of the former governor.

Metuh and his wife Kanayo are owners of four properties including hotel apartments in Dubai. The Metuh’s properties are located in Fakhrudeen Hotel Apartment and the Summit in Dubai. 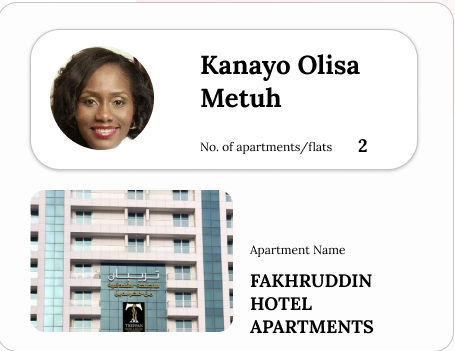 The former PDP Publicity Secretary was convicted on February 25, 2020, by Okon Abang, a judge of the Federal High Court in Abuja.

Metuh was found guilty among others to have fraudulently received 400 million naira from the Office of the National Security Adviser in November 2014.

Following a review of the High Court’s judgement by the Abuja Division of the Court of Appeal, Metuh was discharged of the sentence.

On December 16, 2020, the Appeal ruled set aside the conviction handed down on him by Abang citing bias, without considering the merits in the money laundering case.

However, his case was not over yet, the EFCC later approached the Supreme Court to set aside the judgment of the Court of Appeal on the grounds that the appellate court erred by restricting itself to only two grounds (12 and 14) of the appeal that dwelt on the alleged bias of the trial judge, without examining the merit of the judgment of Justice Abang,” EFCC Alert, January 2021 edition, said.

He was later sentenced to seven years in jail.

Bafarawa, served as the governor of Sokoto State between 1999 – 2007, after his eight-year term, he was arraigned alongside four others by the EFCC on 33 count charge of conspiracy, criminal misappropriation, theft and receiving of stolen funds.

Bafarawa was discharged and acquitted of the allegations by a Sokoto High Court in July 2018.

The EFCC kicked against his acquittal and promised to challenge the judgement.

The former governor of Sokoto, is the owner of six properties located in M5 Community B-V-165, Residences North and Residences South in Dubai.