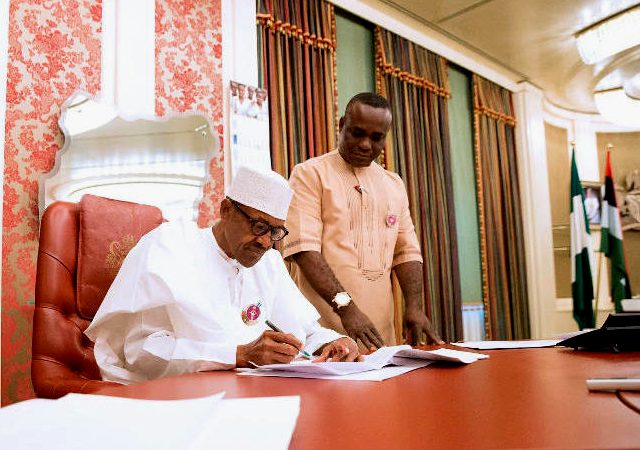 President Buhari had already approved the withdrawal of the sum of $496 million (N151 billion) from the Excess Crude Account (ECA), before seeking the approval of the National Assembly.

This is contrary to comments attributed to Ita Enang, a former senator and current Special Adviser to the President on Legislative Affairs, who claimed that Buhari has not, and could not have approved such spending without first seeking legislative consent as provided for in the constitution.

The National Economic Council (NEC) had agreed that $1 billion be withdrawn from the ECA to be used to procure arms for Nigeria’s anti-terrorism operations. Buhari later gave approval that the money be withdrawn, in spite of the fact that the legislative arm of government had not been informed and its approval not gotten, as required by the constitution.

“No moneys shall be withdrawn from the Consolidated Revenue Fund or any other public fund of the Federation, except in the manner prescribed by the National Assembly.”

However, Buhari wrote a letter, addressed to Yakubu Dogara, Speaker of the House of Representatives, in which he explained that he granted the approval for the withdrawal of the said $496 million, in anticipation that the National Assembly would approve of the deal.

“It would be recalled that, for a number of years, Nigeria had been in discussions with the United States Government for the purchase of Super Tucano Aircraft under a direct Government-to-Government arrangement,” Buhari stated in the letter dated April 13, 2018 sighted by ThisDay newspaper.

“Recently, approval was finally granted by the United States Government, but with a deadline within which part payment must be made otherwise, the contract would lapse.

“In the expectation that the National Assembly would have no objection to the purchase of this highly specialised aircraft, which is critical to national security, I granted anticipatory approval for the release of US$496,374,470.00. This was paid directly to the treasury of the United States Government.

“I am therefore writing, seeking approval of this House for the sum of US$496,374,470.00 (equivalent to N151,394,421,335.00) to be included in the 2018 Appropriation Bill, which the National Assembly is currently finalising. The balance of the requirements for critical operational equipment is still being collated from the different security services and will be presented in the form of a Supplementary Appropriation Bill, in due course.

“The Honourable Minister of Defence and other appropriate officers will be available to provide further details, as may be required.”

Already, the National Assembly had issued a summons to Kemi Adeosun, Minister of Finance, Mansur Dan-Ali, Minister of Defence, and Godwin Emefiele, Governor of the Central Bank of Nigeria, to come and explain why money was withdrawn from the ECA without an approval by the legislature.

However, before Buhari’s letter became public knowledge, Ita Enang had denied that the President approved the withdrawal. He insisted that “the said sum has not and cannot be approved for spending by Mr. President”.

“As of now, the process of approving the money for use is inchoate and still undergoing executive standard operating procedure before laying same before the National Assembly for appropriation,” Enang said in a statement he issued on April 9.

“The processes now being worked on is to fast-track these procedures so that it may be forwarded to the National Assembly while it is still considering the 2018 Appropriation Bill (budget) for incorporation as Mr. President’s supplementary request under the 2018 budget, or if completed after the 2018 budget, it may be forwarded as a Supplementary Appropriation Bill.

“Succinctly stated, Mr. President has not approved the sum for any release of this procurement or application howsoever, the executive is conscious of the provisions of Section 80 (3) and (4) of the 1999 Constitution.

“We are also conscious of the provision of Sections 4 and 5 of the 2017 Appropriation Act (relating to Excess Crude Account) and would not take any action in breach thereof.

“Therefore, the matter of the security fund is still undergoing standard processes, the said sum can only be spent, and in the manner, as shall be approved by the National Assembly, and assented to in the Appropriation Act or Supplementary Appropriation Act.”

ThisDay reports that an official of the US government has confirmed the payment of over $400 million by the Nigerian government, adding that the weapons, which include bombs and rockets, will arrive Nigeria by 2020.

Buhari and the ‘lazy youths’