Pictures can mislead in several ways: when they contain false information, are doctored to misinform or are employed in a false context. As part of a series scrutinising online posts by prominent social media users, The ICIR used publicly available tools to verify pictures shared on Twitter by Lauretta Onochie, Personal Assistant on Social Media to the Nigerian president.

DURING the first term of President Muhammadu Buhari, a good number of his aides restricted their social media posts to official releases and photographs. But some shared a lot more － including outright misinformation.

And, in the days, weeks and months leading to the last general elections in Nigeria, social media became, for presidential aides, as for many others, a tool for merely selling their principal. Social media platforms became a battleground, a turf for peddling propaganda and misinformation and a weapon to discredit and shoot down opponents’ reputations.

President Buhari’s Personal Assistant on Social Media, Lauretta Onochie, in September 2018, tweeted a picture of an asphalt road being constructed.  She captioned it “Nasarawa-Jos Road”, giving the impression that it was a road constructed by the government, but it is actually a stock photo uploaded to Getty Images in November 2015.

The inaccuracy triggered a wave of sarcastic tweets under the hashtag #TweetLikeLaurettaOnochie. She then pulled down the tweet and apologised for the “big mistake” saying “it won’t happen again”.

But, it has happened again and again as  many of Onochie’s other tweets since then have also included misinformation, such as one in December 2018 showing foodpacks bundled with N500 notes. She claimed Atiku Abubakar,  PDP presidential candidate in the 2019 election, had shared the money with voters.

It turned out that the picture was not taken at an Atiku campaign rally but had actually been put out in February 2017 by a Lagos – based charity organisation during an outreach.

Though the President mentioned “fake news” as a security challenge in August 2019, he reappointed Onochie along with several other media aides shortly thereafter. Together the aides command a Twitter following of over 1.7 million, providing a considerable platform to any misleading information they might share.

How we conducted our research

In at least 12 cases, she had used inaccurate pictures. This was determined mainly by scouring the internet for instances where the pictures had been used before in an attempt to locate the original source. (Note: Learn how to conduct a reverse image search here.)

After the search, the findings were brought to Onochie’s attention through a phone interview, but she declined to comment on them, choosing rather to insult the reporter.

“You must be very stupid,” the presidential aide replied curtly, before ending the call.

“I think you need to take your 419 [fraud] somewhere else; the FBI will soon be on your case,” she added minutes later during a second conversation. 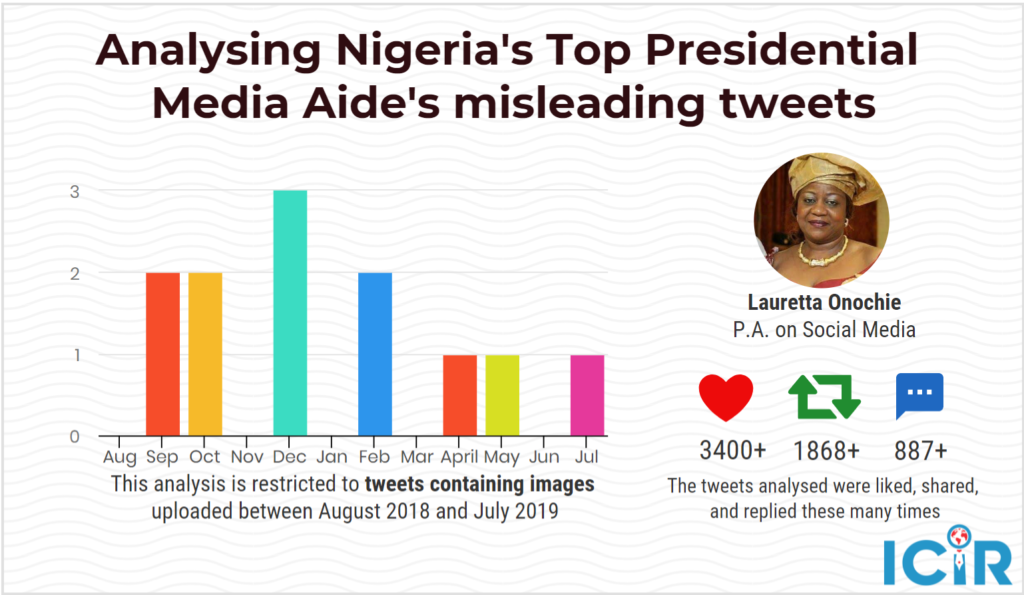 Four pictures appeared on Onochie’s timeline in September 2018 showing what was suggested as low-cost housing projects in the Federal Capital Territory, FCT, funded by the Federal Government. 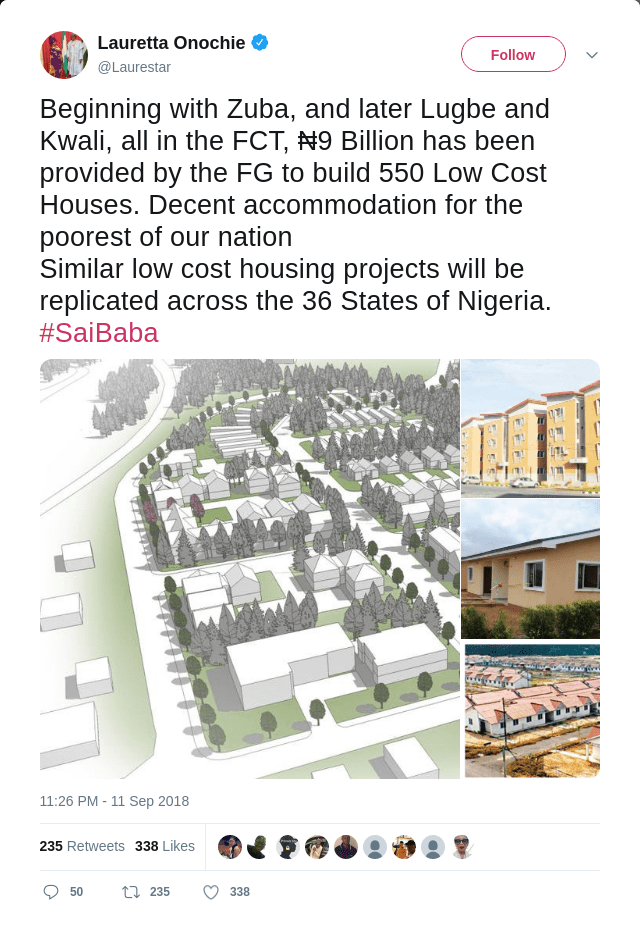 But one picture was first uploaded in April 2014 by the Lagos State Home Ownership Mortgage Scheme. The houses were built as part of the state government’s Rent-to-Own Programme that supports first-time buyer residents. (Note: Here is another picture of the structures under construction.)

Another picture is actually of a bungalow at the Sir Michael Otedola Housing Estate in  Odoragushin, Lagos. Former Lagos State governor Akinwunmi Ambode was photographed inspecting the estate in November 2016.

A third picture dates back to at least 2016 and has been used in articles about housing projects in Malaysia, Guyana and Kenya. The ICIR traced the last picture, to affordable housing that was planned for Revelstoke in British Columbia, Canada.

None of the four pictures, therefore, show housing projects in the Federal Capital Territory, Abuja.

In April 2019, Onochie shared a picture with her followers in which she praised then Borno State governor Kashim Shettima for launching “Africa’s biggest Automated Solar Panel manufacturing plant”.

The tweet was liked 1,309 times and shared by 587 users of the social media platform.

Checks, however, show the picture that is credited to senior airman Larry E. Reid Jr (staff sergeant at the US Air Force), is over 11 years old and depicts a solar power plant in Las Vegas in the US.

In July 2019, Onochie uploaded a picture with a caption lamenting the loss of lives to inter-communal clashes in Cross River State.

However, the picture was taken in January 2012 by Reuters photographer Akintunde Akinleye. It shows protesters chanting slogans “as they march through Ikorodu road during a protest against a fuel subsidy removal in Lagos”.

Two days before the presidential election in February 2019, Onochie shared a picture on Twitter which seemed to show three soldiers dressed in heavy camouflage guarding a ballot box. 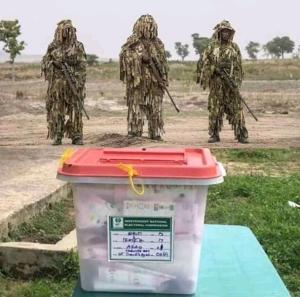 The tweet came after Buhari had instructed the security agencies to deal with anyone who attempted to disrupt the election and said whoever tried snatching ballot boxes did so “at the expense of his life”.

Scrutinising the picture reveals that it is a combination of two photos.

The photo of the soldiers in ghillie suits dates back to April 2018 when it was taken by AFP freelance photographer Stefan Heunis at a military demonstration held in Abuja. It was joined to a picture of a ballot box used at St. David’s Anglican Primary School, Afao, during the 2018 gubernatorial elections in Ekiti. This was uploaded by TheCable in July 2018 to its liveblog of the collation process.

The misleading combination went viral, with a number of blogs sharing it as though it were genuine.

Onochie twice shared quotes supposedly from My Watch, the three-volume memoir of former president Olusegun Obasanjo that was published in 2014.

In December 2018, she shared an image of Obasanjo with a quote credited to him: “The money Atiku stole when he was my vice is enough to feed 300 million for 400 years.” (Note: Though the source of the quote was not mentioned, several other posts claimed it is from pages 31 to 32 of My Watch, Volume 2.) 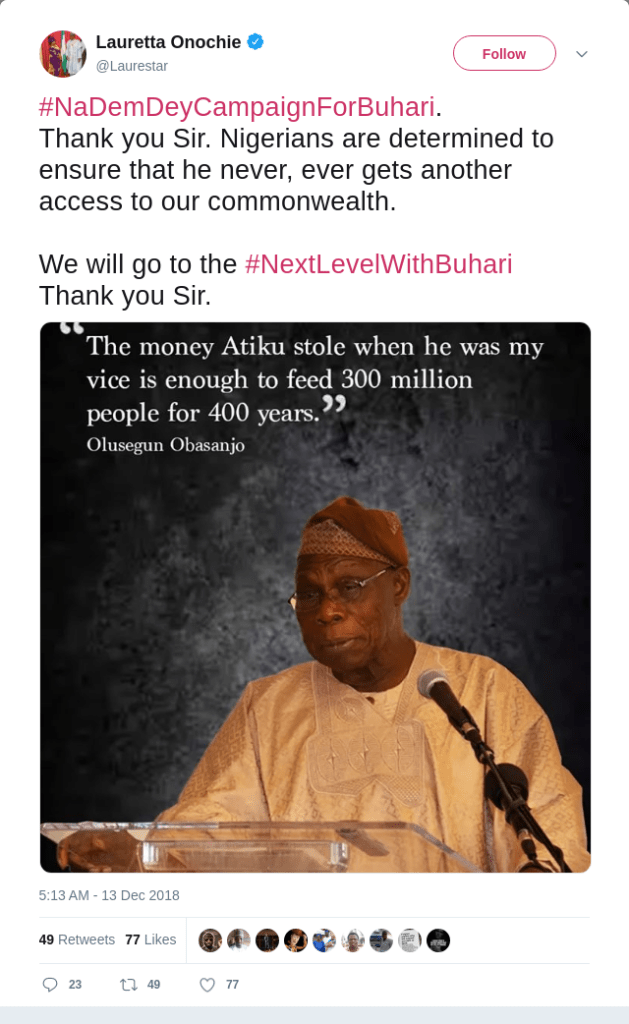 Again, in February 2019, she uploaded a Facebook status screenshot that said “‘Atiku becoming president is like hearing that a former armed robber is now your bank manager’ – OBJ (My Watch, page 49)”.

The ICIR reviewed the pages cited, which didn’t contain anything close to the quotes tweeted. Pages 31 and 32 narrate how Obasanjo settled on Abubakar as his running mate and the regrets he later had. It contains some unpleasant remarks about Abubakar －mentioning a “somewhat shadowy” parental background, propensity to corruption and poor judgment – but does not indict him for large-scale stealing during his time in power.

Pages 49 of all three volumes make no mention of Abubakar or his likeness to an armed robber.

Other excerpts published from the book about Abubakar also do not contain the two quotes shared by Onochie. The quotes are, thus, misattributed.