Fayose: Instead of hosting Osinbajo secretly, Buhari should speak to Nigerians publicly 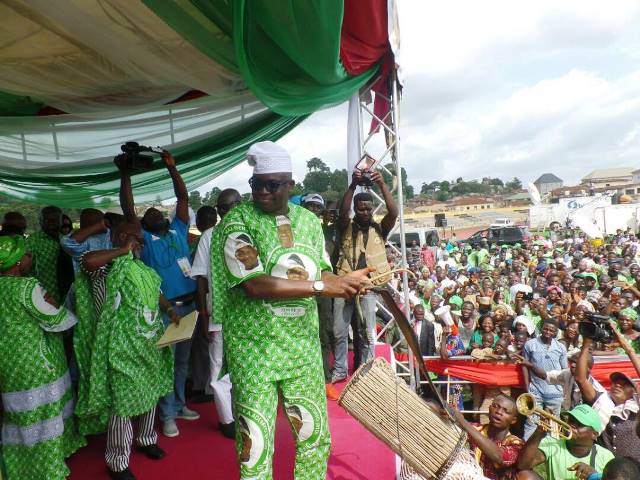 Ayodele Fayose, Governor of Ekiti state, says Nigeria should be asking President Muhammadu Buhari to resign rather than wasting time on whether he truly met with the Acting President Yemi Osinbajo on Tuesday as was widely reported in the media.

Fayose made this known on Wednesday in a statement issued by Lere Olayinka, his media aide, describing the so-called visit of the Acting President Yemi Osinbajo to London as one deceit too many by the All Progressives Congress, APC-led government.

He demanded that President Buhari should address Nigerians via live video, and not a purported visit with no photo or video evidence.

“President Buhari has spent 65 days out of the country since he left on May 7, 2017 and no one has seen him. Yet Nigerians are being told that the Acting President Osinbajo visited him with no picture, no video to show except that of his (Osinbajo) entering and leaving the Abuja House in London,” Fayose said.

“Today is July 12, making 115 days that President Buhari spent abroad taking care of his health out of the 193 days in 2017, and what Nigerians are being told is that Acting President Osinbajo met him secretly in London, this is ridiculous.

“Should we be talking about President Buhari being met behind the camera by the Acting President at this time or the President resigning so that the country can move forward?

“Isn’t it funny that those who told Nigerians in 2010 that the health of the President, as a public figure, cannot be of interest only to his families and friends and that Nigerians have a right to know the President’s state of health are the same people in power now and are feeding Nigerians with tales of Buhari being met behind camera by the Acting President?

“It is therefore my position that Nigerians do not need this drama of Osinbajo’s behind the camera meeting with Buhari. Rather, what we want is that the President should speak to Nigerians publicly and disabuse the minds of the people who are of the belief that he is already incapacitated and cannot continue as President.”

Like Fayose, many Nigerians had taken to the social media to express their doubt at the purported visit of the Acting President to London.

This was in spite of Osinbajo’s claim that the President was “in high spirits” and “recuperating fast”.

Chat us on WhatsApp
Advertisement
Previous articleIt’s time to review age limit on public offices, says Dogara
Next articleTwo victories in four days. Watch out, APC! PDP is coming for you