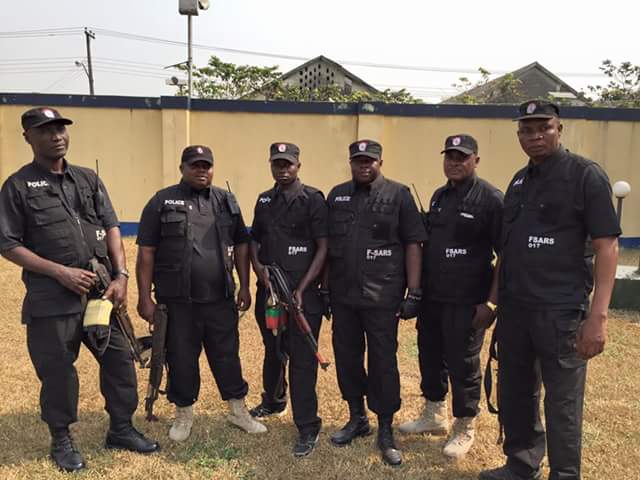 FIFTEEN months after President Muhammadu Buhari ordered the implementation of the report of the Presidential Panel on Special Anti-Robbery Squad (SARS) Reform, Nigerians again have renewed calls for an end to this unit under Nigeria Police Force after following reports that some SARS operatives shot allegedly dead a young man in Ughelli area of Delta State.

This special unit of the Police has in recent times been accused of illegal activities and brutalities on young Nigerians.

In the video, Okonkwo wrote ” A Young Man Was Shot Dead Today In Broad Daylight By SARS Officers At Ughelli, Delta State. After Killing Him, They Stole His Car (Lexus Jeep) And Left His Body On The Road Side. SARS Officers Are Now Rogue Criminals In Uniform #EndSARS. Its Time The Youths Declared #WarOnSars.”

However, Hafiz Inuwa, Delta State Commissioner of Police in a report by ChannelsTV, denied the incident, stating that the young man allegedly shot was not dead.

“What happened was that they were on patrol when they saw a Lexus jeep parked by the roadside. Immediately, the Lexus jeep saw the patrol jeep, they just zoomed off,” Inuwa said.

“The police gave chase, caught up with the Lexus, and occupied it. However, one of the suspects tried to jump out of the moving vehicle and, in the process, sustained injuries. “He is still alive and in hospital,” he stated.

But this has prompted Nigerians to mount a campaign on social media demanding an end to SARS.

Trending under the hashtags; #EndSARS, #SARSbrutality, and #WaronSARS stories and video clips of SARS brutality flooded the internet.

A video by Twitter user, Emmylite_United, uploaded on September 26 showed some men in mufti believed to be SARS operatives bundling a young man who was shouting for helping into a car.

In the video, Emmylite_United is heard saying, “Rogue SARS officers are now moving around targeting and harassing young men using Uber and Bolt. This happened just right in front of me today. So bad.”

Also, another Twitter user sharing her experience said officers of SARS in Bayelsa State arrested her cousin who had just stepped out to have a hair cut.

She said, her 19-year-old cousin was arrested after the operatives found a picture of a white woman on his phone. “They demanded N50,000 for his release but eventually collected N35,000 to set him free, said the Twitter user, using the handle GloryBaee.

While Abubakar, Saraki and AI condemned and called on the Buhari led Federal Government to reform SARS, Dare, promised that investigation would be carried out on the recent allegation.

The former Peoples Democratic Party (PDP) presidential candidate described the SARS unit of the police as oppressors of the Nigerian masses.

He said the police unit had succeeded in abusing peoples right under the watch of President Muhammadu Buhari-led administration and demanded an urgent review.

“The Special Anti-Robbery Squad (SARS) unit of the Police was set up to confront violent crimes such as armed robbery, kidnapping, and other related crimes. However, the unit has today morphed into an oppressor of the Nigerian masses who strive every day for a better life,” he said.

“It is expected that the activities of SARS reviewed to ensure that the rogue elements are excised from the unit and sanity returned to its operations.”

On his part, Saraki who described SARS as the rogue cells of the @PoliceNG urged the Federal Government to immediately put a stop to these reprehensible activities and restructure the unit.

“The reports of the continued harassment, illegal arrest, detention and high handedness by rogue cells of the SARS Unit of @PoliceNG against innocent Nigerians – most of them young people – in spite of efforts to reform the Police & raise standards of policing, are disheartening,” Saraki said.

“A situation where the officers of @PoliceNG become a threat to the lives and property of the very citizens they swore to protect is condemnable and unacceptable.”

“I call on the Federal Government to immediately put a stop to these reprehensible activities and restructure the unit to better perform its lawful duties of safeguarding the lives and property of the Nigerian people.”

Bankole Wellington, Musician, and Nollywood artiste popularly known as Banky-W also has demanded an immediate response from the government.

“How many young Nigerians will have to be robbed/ kidnapped/killed by SARS before our Government takes it seriously? The “Special Anti-Robbery Squad” is doing the robbing?! Such a disgrace. What will it take for our “leaders” to do something about it? he said,

Amnesty International in calling for an end to police brutality in Nigeria said the majority of the victims of torture in SARS custody are poor and unable to hire legal representatives.

It stated further that the police unit created to protect Nigerians has instead become a danger to society, torturing its victims with complete impunity while fomenting a toxic climate of fear and corruption.

It also said SARS officers are getting rich through their brutality.

“In Nigeria, it seems that torture is a lucrative business. Police torture is a stain on Nigerian society that must be addressed with clear orders to law enforcement officers not to inflict torture or other ill-treatment on detainees under any circumstances” the global human rights watchdog said.

Dare Sunday, the Minister of Youths and Sports Development has said the Federal Government would look into the reports of increasing menace and harassment of Nigerians by SARS.

John Joshua-Akanji, the Special Assistant to the Minister in a statement issued on Saturday said Dare had been monitoring reports of the attacks by SARS, disclosing that the incident has been brought to the attention of relevant security agencies and would be investigated.

“The ministry of youth and sports is worried about the menace, increasing harassments and attacks by SARS, especially targeted at youths and other innocent members of the public, and brought it to the attention of the relevant security agencies in Abuja,” the statement read.

Past government efforts on SARS reform

The incessant harassment and brutality of Nigerians by SARS have in the past led some Nigerians to call for the disbandment of the unit. There have been allegations of arbitrary arrest, extortion, torture, and murder against operatives of SARS by Nigerians.

After a nationwide outcry in 2018, Yemi Osinbajo, Nigerian Vice-President ordered the total overhaul of the Special Anti-robbery Squad (SARS) of the Nigerian Police Force.

Laolu Akande, a media aide to the Vice-President in a statement said Osinbajo, then as an Acting President gave the directive “following persistent complaints and reports on the activities of SARS”.

He was reported to have directed the Inspector General of Police to, with immediate effect, overhaul the management and activities of SARS and ensure that any unit that will emerge from the process, will be intelligence-driven and restricted to the prevention and detection of armed robbery and kidnapping, and apprehension of offenders linked to the stated offences, and nothing more.

President Buhari in June 2019 who received the report of the Presidential Panel on SARS Reform, ordered that its recommendations be implemented.

He directed the Inspector-General of Police, the Ministry of Justice, and the National Human Rights Commission (NHRC) to work out modalities for the implementation of the report of the Presidential Panel on the Reform of the Special Anti-Robbery Squad (SARS) within three months.

But SARS brutality and killings didn’t end as eight months after Buhari’s directives, Kazeem Tiamiyu, a footballer with Remo Stars Football Club was allegedly killed by operatives of SARS.

The ICIR also in April of 2020 reported about how several other cases of SARS killings that had been reported in the news and shared on social media.