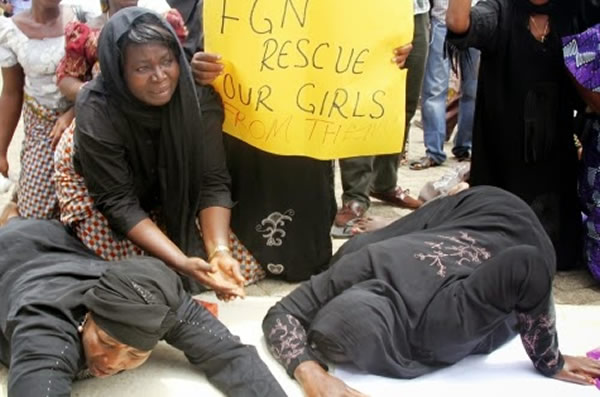 Human rights activist and leader of the “Bring Back Our Girls” demonstration, Naomi Mutah Nyadar, has been arrested allegedly on the orders of the First Lady, Patience Jonathan, who accused her and others fighting for the release of the abducted Chibok school girls as Boko Haram sympathisers

Nyadar was said to have attended an all-night meeting conveyed by Jonathan over mysteries surrounding the kidnap of over 200 girls from the Government Secondary School, Chibok, Borno State on April 14.

Perhaps, indicating the attitude of the Jonathan government to the issue, she reportedly bluntly told the ladies that she did not believe that there was any kidnap and consequently labelled Nyadar and others members of Boko Haram who want to give the administration a bad name.

The Associated Press and BBC report that the activist was arrested on the orders of the First Lady and taken to an unknown destination.

Another leader of the protest, Saratu Angus Ndirpaya, told AP that State Security Service, SSS, agents drove her and Nyadar to the police station after the meeting at the presidential villa in Abuja but that the police immediately released her but held on to Nyadar.

She told AP that during the meeting the First Lady expressed doubts there was any kidnapping and accused them of belonging to Boko Haram.

Ndirpaya said the First Lady accused them of fabricating the abductions.

“She told so many lies, that we just wanted the government of Nigeria to have a bad name, that we did not want to support her husband’s rule,” she said in the telephone interview with AP.

Jonathan was also said to have been disappointed that the Borno State Governor’s wife, Nana Shettima, failed to show up for the meeting but sent a representative.

It said the First lady at the meeting also insisted that the state government and the commissioner of education should be blamed for the abduction of the girls as they failed to act on the letter from the Minister of Education, Nyesom Wike, for relocation of WAEC candidate to Maiduguri or a safer place.

Jonathan who had earlier volunteered to lead a protest to the state to further demand release of the girls has changed plans, saying now that those in Borno should handle matters themselves until they show more seriousness to the issue on ground.

“The mother of Borno is not concerned about what is happening, her children are involved. Why should I cry more than the bereaved? The world will ask me a question if I do…You are playing games. Don’t use schoolchildren and women for demonstration again. Keep it to Borno, let it end there. Until you people are ready to cooperate,” she said.

Meanwhile, former minister of Education, Obiageli Ezekwesili, who also joined in the street protest last Wednesday in Abuja for the same course, has taken to her twitter handle to give updates on Nyadar’s arrest.

Ezekwesili said the Divisional Police Officer, DPO, in charge of the Asokoro Police station, Nnanna Ama, has refused to tell Nyadar’s husband or her lawyer the offence committed by the rights activist, insisting he has more pressing matters to attend to.

“The summary is that 8 hours after mrs. naomi mutah nyadar was detained unjustly, the @policeng has refused to speak to her husband & lawyer. dpo lashed out on his right to privacy. a public officer on duty who should account to us on mrs. naomi nyadar’s unjust detention? really?” the former minister tweeted.

She claims she got the DPO speeches taped.

“How UNJUST can our FG be to DETAIN an ordinary mother Mrs. Naomi Nyadar a #ChibokWomanLeader AFTER she honored Mrs. Jonathan’s MEETING.??? I can’t BELIEVE this is the democracy 4 which some of us were beaten on the Streets of Lagos. Such repression on a poor woman 4 protesting?” she queried.

She said Nyadar has been taken from the Asokoro Police station to unknown destination and that her husband was not even told her destination.

THE Nigeria Immigration Service (NIS) has directed passport offices across the country to work...

PRESIDENTIAL candidate of the All Progressives Congress (APC) Bola Tinubu has, again, told the...

THE United Nations Children Fund (UNICEF) said it is mourning the loss of 100...

THE presidential candidate of the People's Redemption Party (PRP), Kola Abiola, has been fined...
Advertisement