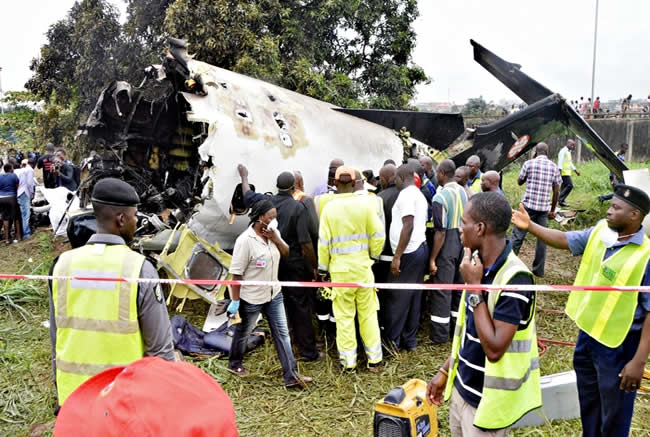 Chief executive officer of the Accident Investigation Bureau, AIB, Mukhtar Usman, has confirmed there are four survivors of the ill-fated Embraer 120 aircraft which crashed Thursday into the tank farm of Sahara Group,  one of the companies supplying aviation fuel to airlines at the Murtala Muhammed International Airport, Lagos.

Contrary to an earlier report that Feyi Agagu, first son of the late former governor of Ondo State died in the crash, along with all on board the aircraft, officials say four persons survived but declined giving their names.

Briefing the media about the incident, Usman said an emergency response centre had been set up to attend to the families of the victims, as efforts are been made to reach them.

“So far, we have four survivors from the accident. And they are currently receiving treatment at the hospital,” the accident bureau chief said.

Although he did not name the hospital, earlier reports said the survivors of the crash were taken to the Nigerian Air Force Hospital for treatment, while the dead were also taken to its morgue.

A list of survivors released by the management of the Lagos State University Teaching Hospital, LASUTH has the following names: Agagu Feyi , Akintunde Taiwo, Akintunde Akeem, Akinsanya Femi and an unknown male.

The chartered aircraft belonging to Associated Aviation Limited with registration mark 5N-BJY, had 20 persons and the remains of the late former governor of Ondo State, Olusegun Agagu

The accident which occurred at about 9:15am, few minutes after an unsteady take-off, left at least 16 passengers burnt beyond recognition.

However, the casket containing the remains of Agagu, kept in the luggage compartment, was intact as it was not burnt when it was finally removed from the wreckage.

The crash led to a heavy human and vehicular traffic along the roads leading to the airport as many people thronged the scene to catch glimpses of the incident.

Aviation Minister, Stella Oduah said the ministry has commenced investigations into the plane crash, adding that the Black Box of the Embraer 120 aircraft had been found.

According to her, efforts were on to contact the families of the victims before releasing the manifest containing their names.

The Ondo state government has described the crash as an unfortunate disaster, confirming that a commissioner, family members, associates and other top government officials were aboard the ill-fated plane, according to a statement signed by the chief press secretary to the governor, Eni Akinsola.

It urged residents of the state to be in a “sober and prayerful mood at these trying times as God is indeed the only person we should call upon in this period.”

Governors Ibikunle Amosun of Ogun State and Abdulfatah Ahmed of Kwara State, have commiserated with the affected families and entire people of Ondo State.